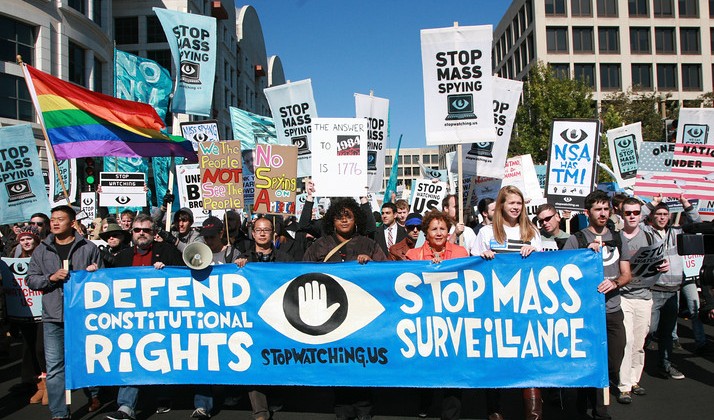 Above: Demonstarators carry signs at “Stop Watching Us: A Rally Against Mass Surveillance” march near the U.S. Capitol in Washington, October 26, 2013. (Reuters / Jonathan Ernst)

Thousands gather in Washington for anti-NSA ‘Stop Watching Us’ rally

Thousands gathered by the Capitol reflection pool in Washington on Saturday to march, chant, and listen to speakers and performers as part of Stop Watching Us, a gathering to protest “mass surveillance” underNSA programs first disclosed by the whistleblower Edward Snowden.

Billed by organizers as “the largest rally yet to protest mass surveillance”, Stop Watching Us was sponsored by an unusually broad coalition of left- and right-wing groups, including everything from the American Civil Liberties Union, the Green Party, Color of Change and Daily Kos to the Libertarian Party, FreedomWorks and Young Americans for Liberty.

The events began outside Union Station, a few blocks away from the Capitol. Props abounded, with a model drone hoisted by one member of the crowd and a large parachute carried by others. One member of the left-wing protest group Code Pink wore a large Barack Obama mascot head and carried around a cardboard camera. Organizers supplied placards reading “Stop Watching _____”, allowing protesters to fill in their own name – or other slogans and occasional profanities. Homemade signs were more colorful, reading “Don’t Tap Me, Bro” “Yes, We Scan” and “No Snitching Allowed.”

Thousands marched to the Capitol to protest NSA surveillance on Saturday, following a week of news that the U.S. had spied on leaders of 35 countries, according to a classified document leaked by Edward Snowden.

“No matter what they say, we’re going down the path toward tyranny,” one protester said.

Leaders in France, Italy, Spain and Brazil have protested the surveillance, and Germany is sending an intelligence team to Washington to discuss the issue.

Thousands rallied against the National Security Agency’s domestic and international surveillance programs Saturday, marching from Union Station to the Capitol to call for an end to mass surveillance.

“We are witnessing an American moment, in which ordinary people — from high schools to high office — stand up to oppose a dangerous trend in government,” said a statement from Edward Snowden, read aloud at the rally by a participant.

The former NSA employee who leaked information about government surveillance programs to the media ended his statement by saying, “It is time for reform. Elections are coming, and we’re watching you.”

The march was organized by the Stop Watching Us coalition and drew on the support of more than 100 public advocacy groups. They included the American Civil Liberties Union, Demand Progress and the Council on American–Islamic Relations.

Thousands of demonstrators descended on Washington for the ‘Stop Watching Us’ rally on Saturday.

It was billed as one of the largest anti-mass surveillance demos so far, and brought together diverse groups with members of the conservative Tea Party rubbing shoulders with the Green Party to call for an investigation into the NSA Spying revealed by whistleblower Edward Snowden.

“He should be held up as a hero;” declared Mike Ewall part of the anti-surveillance protest. “I mean, we have people who are committing the crimes right here, in Maryland, at Fort Meade and here in D.C and they’re the criminals.

‘We shouldn’t be chasing down truth tellers who are whistle blowers, to other countries, basically imprisoning them, taking away their rights when they’re the ones who should be put on a pedestal.”

Thousands have marched on the National Mall in Washington, DC to protest covert NSA surveillance operations on the anniversary of the Patriot Act. The organizers have presented Congress with a petition which has acquired over 580,000 signatures.

Stop Watching Us is a collective of 100 public advocacy groups, among them the American Civil Liberties Union, Freedom Works, as well as individuals like Chinese artist/activist Ai Weiwei and Glenn Greenwald, the journalist who worked with Edward Snowden to expose many of the NSA’s surveillance procedures. The rally began at 11:30 am local time on October 26 – the 12th anniversary of the US Patriot Act.

Below are photos by Ted Majdosz.  For more photos visit here.