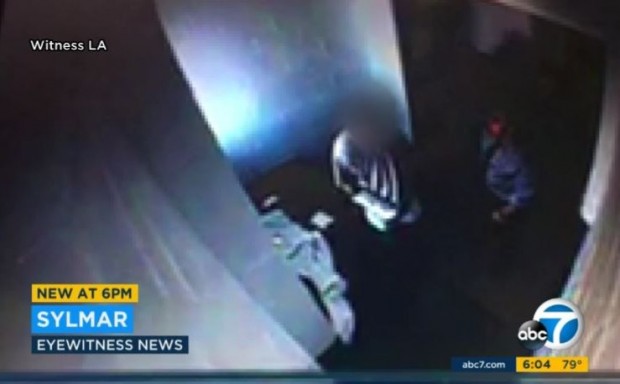 As Los Angeles County reforms the largest juvenile justice system in the country, a new, damning video shows that the culture of abuse within that system remains intact. In surveillance footage leaked by whistleblowers inside a detention center, four probation officers are seen pummeling a teenager in a holding room.

The silent video, recorded at L.A. County’s Barry J. Nidorf Juvenile Hall in Sylmar, shows the teen exchanging words with several officers standing in the room. All of a sudden, three officers lunge in his direction, slam him on a concrete cot, pile on top of him, and beat him. At one point, a fourth officer enters the room and joins in the beating, and moments later a supervisor comes in to watch.

Watch part of the video here:

Unidentified workers inside the facility sent the footage to WitnessLA, a local news source that refused to publish the video in full because the teenager is a minor. The news site published a series of screenshots online and included a detailed timeline of everything that occurred. According to editor Celeste Fremon, the teenager’s shorts were pulled down to his knees by the time the officers exited the room. When he tried to stand up and walk, he fell over in pain.

“There is still a culture of brutality against juveniles, and they are very upset about it,” Fremon said of the whistleblowers in an interview with ABC 7.

There are approximately 1,200 kids and teenagers in L.A. County’s monstrous juvenile justice system, which is made up of 16 juvenile halls and camps. Many of them live in deplorable conditions.

A scathing report released in March likened the main juvenile detention center to a “Third World country prison,” where young people are surrounded by walls covered in urine and scum and don’t have their own running water. A separate report concluded that youth in the system have little access to counseling and educational programming, even though juvenile detention is supposed to be rehabilitative in nature. Programs that are available are treated as privileges.

And countless juveniles have spent hours, days, and years in solitary confinement, which scientists and criminal justice experts consider a form of psychological torture, for minor infractions like sharing food. When they’re locked away in isolated units for extended periods of times, juveniles are denied rehabilitative services altogether and experience a wide range of mental health problems.

But in light of these abuses, lawmakers are slowly trying to fix the system. In May, the Los Angeles County Board of Supervisors banned the use of solitary confinement. At the time, Supervisor Sheila Kuehl said, “We can’t afford to treat these youngsters in this manner and expect that when they get out, they’re going to be OK.”