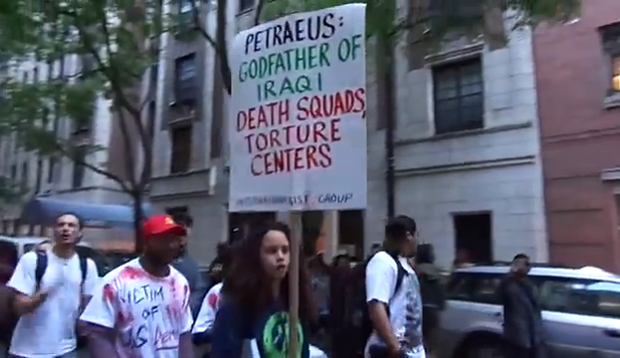 Scores of academics at the City University of New York have signed a petition calling for charges against six students, arrested during a protest against David Petraeus, to be dropped. The academics have also called for the former four-star general to resign from his teaching role at CUNY.

The six students were detained on Tuesday as they demonstrated outside a fundraiser being attended by Petraeus, who began his career as a CUNY adjunct professor this month. The students were charged on Wednesday night with multiple offenses including disorderly conduct, riot, resisting arrest and obstruction of governmental administration.

However protesters argue that police were heavy-handed as they conducted the arrests. Video footage showed one demonstrator being repeatedly struck in the ribs as officers place him in handcuffs.

The arrests, which were conducted at what demonstrators insist was a peaceful protest, have galvanised support for the protesters from CUNY students and professors and from professors elsewhere in New York and beyond.

“As graduate students and educators of CUNY, we express our outrage at the violent and unprovoked actions by the NYPD against CUNY students peacefully protesting the appointment of war criminal David Petraeus as a lecturer at the Macaulay Honors College,” said a statement signed by scores of CUNY academics. “We deplore the use of violence and brutal tactics against CUNY students and faculty who were protesting outside the college.”

Petraeus was set to earn $200,000 for teaching a three-hours-a-week course titled “Are We On the Threshold of the North American Decade?” This was reduced to $150,000 after uproar over his wage, before Petraeus and CUNY agreed it would be reduced to a nominal $1, in order “to remove money as a point of controversy”.

A statement from the Ad Hoc Committee Against the Militarization of CUNY, which is organising the protests, said in a statement: “A broad range of CUNY students, faculty and staff members have been carrying out a campaign of ‘protest and exposure’ against the Board of Trustees’ appointment of Petraeus, whose documented actions as Iraq/Afghanistan war commander and CIA chief include drone attack supon civilians, and the creation of torture centers and death squads.”

Petraeus’s first class was on Monday 9 September. Afterwards, a group of students heckled him as he walked down a Manhattan street. A video of the event went viral, although the protesters, who could be heard berating Petraeus as a “piece of shit”, were criticised in some quarters for the aggressive nature of their demonstration.

Protesters say the arrests on Tuesday were unwarranted and violent, however, and occurred after “peaceful” demonstrations.

Sandor John, an adjunct professor of Latin American history at CUNY’s Hunter College, was among the crowd in Manhattan’s Upper West Side and witnessed some of the arrests.

“I saw one of the students who was arrested, a young man, being held face down on the ground by police; he was completely immobilized, and then a plainclothes officer knelt down and repeatedly punched him hard in the lower back, in the kidney area,” he told the Guardian.

The NYPD did not immediately respond to requests for comment. The arrests seem to have garnered more support for the students’ cause, however, with the petition signed by academics stating that they “emphatically support the efforts of these CUNY students to resist the attempts by the US government and the CUNY administration to turn the university into an infamous ‘war college’ with the appointment of Petraeus”.

The statement added: “We call on CUNY to terminate Petraeus’ appointment and to ask for the charges against these students to be dropped immediately.”