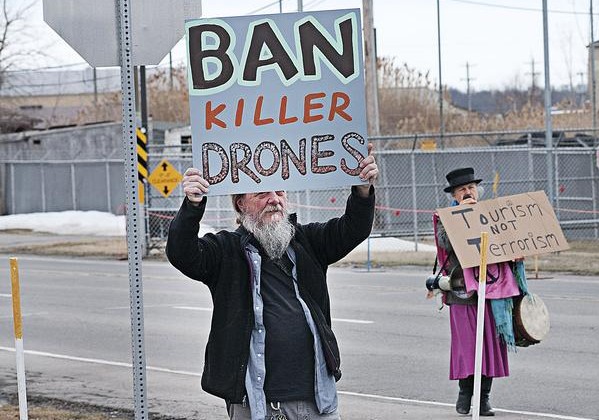 Above: Russell Brown of Buffalo photo by James Neiss

Syracuse July 31, 2014   After two hours of deliberation,Vietnam Veteran and Buffalonian Russell Brown,  was acquitted tonight by a six person jury in DeWitt Town Court, East Syracuse. He was facing charges of Obstruction of Governmental Administration (OGA), a misdemeanor carrying up to a year incarceration and up to $1000 fine, as well as Disorderly Conduct charge, a violation.   Mr. Brown who went before the court Pro Se (he served as his own counsel) was assisted by Buffalo Attorneys Daire Irwin and Paul Fallon.

Mr. Brown was arrested during a nonviolent protest at Hancock Air National Guard Base on April 28, 2013. In a roadway across from the Airbase, he lay down to symbolize the death of drone victims.    There are biweekly demonstrations at Hancock Airbase.  Several times a year there are larger demonstrations and nationally coordinated events.  On six occasions there have been arrests, leading to six trials since 2011. Mr. Brown’s trial is the second acquittal. There are twenty activists are facing prosecution, working with Upstate Drone Action.

During testimony, Russell told what he did leading up to the “Global April Days of Action” gathering in Syracuse. This included his writing a poem that links the drone attacks conducted at Hancock with the missions he conducted in Vietnam.  A marine from 1965 – 1967, he told of the war he experienced. His participation in senseless killing and brutality in Vietnam informed his understanding of the Drone War Program at the 174th Attack Wing.  Russell now finds allegiance with the victims of the drone attacks.

Laying on the street with “blood” spattered clothes lifted a weight of guilt from Russel.  Transforming guilt to regret makes possible a voice: poet, marcher in a ‘legal’ protest, drone victim laying in the street were deemed protected speech.  The message was closely attended by the jury.  Brian Hynes said, “They saw the human power of the message and the public value of the method used to deliver it. Drones kill senselessly and illegally and traumatize our airmen.”

Russell said that the wars of the last decade brought back his experiences in Vietnam. “Lying in that road was the most peaceful moment I’ve experienced since I left Vietnam,” he said. “I was silent then in the face of those atrocities and I can’t be silent anymore.”

The jury was smiling as they returned to give the verdict. Later one juror asked a supporter to “Thank Russell for us!  My brother was in the Vietnam War and lost his leg. We know what the vets went through.”  The juror also acknowledged the PTSD drone pilots experience.  Another juror said, “We did what was needed to be done.  It was fair and just”.

Hancock Air National Guard Base, home of the 174th Attack Wing, is a domestic hub for drone assassinations, support and operation, particularly in Afghanistan. The Niagara Falls Air Base is also embarking on a mission to operate weaponized drones.  The Hancock emerged following arrests at Creech Airforce Base in Nevada, and the Gandhian Wave of protest there has spearheaded national and international movements against the use of drones for assassination in countries we are not at war with and wars of occupation.

The Upstate Coalition to Ground the Drones and End the Wars