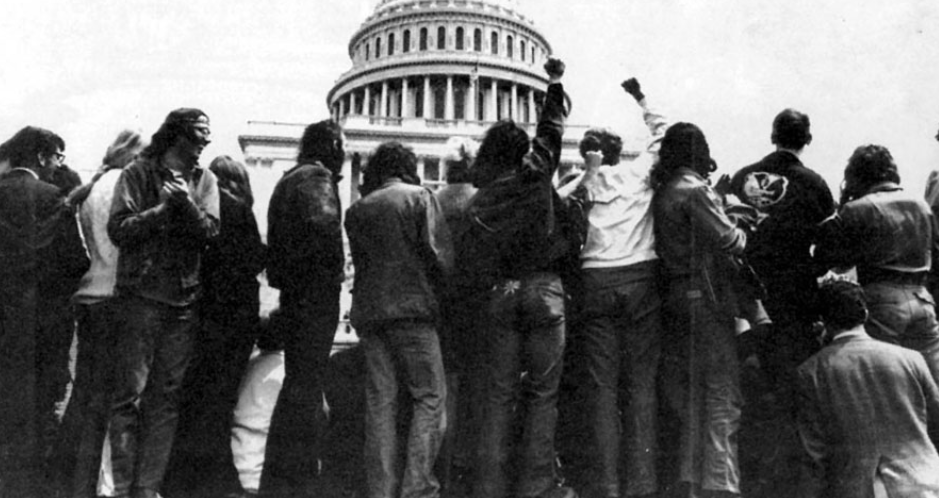 Vietnam Veterans Descended On The Capitol 50 Years Ago This Week

Above photo: Vietnam Veterans Against the War at the U.S. Capitol for Operation Dewey Canyon III in 1971. VVAW.org/Fred W. McDarrah.

Not to impede democracy but to practice it.

Bigger than the Jan. 6 insurrection, the 1971 antiwar mobilization known as Operation Dewey Canyon III altered the course of the war and uplifted the nation.

On Sunday, CBS News’ “60 Minutes” profiled the Oath Keepers, a white-supremacist veterans’ group founded when President Barack Obama assumed office. The program traced the group’s history from its 2009 formation to its armed support of Cliven Bundy in 2014 to its open plotting of sedition in December 2020. Then CBS showed some cell-phone footage of the 40 members of the group on Jan. 6, 2021, as they breached the U.S. Capitol in perfect military formation.

That insurrection’s aftereffects are still being felt, with 400 participants having been arrested by the Justice Department. Now, as indictments loom, at least one Oath Keeper is openly cooperating with the Department of Justice, and the country’s two political parties are broadcasting dueling narratives about Jan. 6. Meanwhile, for some Vietnam veterans — particularly those featured in my 2020 book, “I Ain’t Marching Anymore” — the insurrection induced more than a little déjà vu.

Fifty years ago this week, more than a thousand Vietnam veterans crowded the U.S. Capitol from April 18-23, 1971. Members of Vietnam Veterans Against the War, or VVAW, piled into D.C. from every state, stuffed into cars and trucks and buses, then circled the Capitol with encampments. Unlike the vets leading the 2021 white-supremacist insurrection, the 1971 uprising came to Washington to practice democracy, not impede it; organized chapter by chapter, it ended up including and influencing members of Congress. “Operation Dewey Canyon III,” nicknamed for two Vietnam campaigns, would set the bar for activism to follow.

In a year full of 50th anniversaries, ODCIII — as it’s called — is right now largely remembered for the debut on the public stage of John Kerry, former Secretary of State and current climate envoy, whose participation later doomed his 2004 presidential campaign. But Kerry’s debut was part of a larger, well-organized mobilization: hundreds of vets lobbied Congress, filled hearing rooms, and camped out at West Potomac Park and the National Mall. They crossed the Potomac — some in wheelchairs or on crutches — to Arlington National Cemetery, where a former military chaplain led a funeral service for the war dead. They refused to stop sleeping on the Mall despite orders from the Supreme Court. The war they hoped to stop didn’t end until four years later, but its course and that of the nation was altered by their movement, many of whom are still fighting for change today.

Founded in 1967 at a New York City anti-war march, VVAW had grown by 1971 to a membership of 50,000. The trial of Lt. William Calley, for massacring Vietnamese civilians, spurred more vets to get involved. John Kerry, tagged by the FBI as “John Carry,” joined in 1970 and also accompanied the group in Valley Forge that September. The following February saw a full-page VVAW ad in Playboy, featuring a coffin draped in an American flag with the text: “In the last 10 years, over 33,5000 of our buddies have been killed or wounded in Vietnam. And more are being killed and wounded every day. We don’t think it’s worth it.”

That same month VVAW held the Winter Soldier Investigations — three days in Detroit when soldiers testified about war crimes in Vietnam. When those hearings didn’t get the press coverage the group had hoped for, Kerry helped the winter soldiers out of their funk, saying, “I have a suggestion that we take all of this that we want to convey in a march on Washington.” By March, the verdicts came down from the My Lai trials with Calley sentenced, but not the higher-ups on whom he relied.

On April 12, the FBI informed the White House that a group called Vietnam Veterans Against the War planned “Operation Dewey Canyon III,” an action being monitored by the 108th Military Intelligence Group, Naval Investigations Services Office, USAF’s Office of Special Investigations and the Secret Service. Veterans were already en route: “I was driven to Washington D.C. by John Kerry in a U-Haul truck,” John Bangert wrote last week on Facebook. “With the sound systems and mics.”

On Sunday, April 18, “Meet the Press” unveiled Operation Dewey Canyon III, with appearances by Kerry and Col. James Donovan (author of “Militarism U.S.A.”). Kerry candidly discussed Calley’s March 19 conviction and said that he, like many others, had committed the same abuses “as thousands of other soldiers have committed, in that I took part in shootings in free-fire zones. I conducted harassment and interdiction fire. I used .50 caliber machine guns, which we were granted and ordered to use, which were our only weapon against people. I took part in search and destroy operations.”

The sight of a clean-cut lieutenant, flanked by two nodding generals, using the language of Winter Soldier put Kerry higher up on the commander-in-chief’s enemies list: “One day after Kerry’s TV appearance, Colson fired off a memo expressing exasperation that more wasn’t being done to undermine Kerry and the other VVAW organizers. “Destroy the young demagogue before he becomes another Ralph Nader.”

While Kerry was on “Meet the Press,” carloads of vets were arriving in Washington, D.C., some with their own tents. According to Ron Ferrizzi, from Philadelphia, “We were maybe 45 guys in two rented Ryder truck.” Meanwhile, Nick Velvet, then based in Boston, said, “I drove down to D.C. with Rusty Sachs,” whose blonde bearded smile had been prominent during Winter Soldier.

By sundown, 900 had camped at West Potomac Park, not far from the Lincoln Memorial. By the end of the week, 1,500 were encamped on the Mall, then marching to Arlington National Cemetery and to Capitol Hill to present demands to legislators. There were three separate marches on Arlington National Cemetery that week, each growing in size. “I remember like it was just a few years ago,” Rick Chalek explained in a recent Facebook post. “I remember they wouldn’t let us into Arlington, but the next day we came back with Gold Star Mothers [whose sons had died in the war] at the front, and the gatekeepers were too embarrassed to keep us out then.”

Photos of the week show a kind of Woodstock in green fatigues, including guerrilla theatre performances on the steps of the Supreme Court. Mitchell Bober recalled that event on Facebook, writing, “When the arrests were made — it is illegal to protest on the Supreme Court grounds — we began to collect funds on the corners around the area. Within a short period of time bail money was raised,” some of it from Capitol Hill staffers. In one photo, the sea of fatigues is punctuated by the signature hat of Rep. Bella Abzug, a Democrat from New York, speaking to the crowd. Abzug “was a funny sweetheart to us in VVAW,” Jim Murphy recalled. “[Abzug] let us use her “Watts Line” for organizing calls nationally, as did Rep. Perrin Mitchell, a Democrat from Maryland.”

As veterans in wheelchairs entered the House building to lobby for withdrawal, Ron Dellums and George McGovern led “rogue” congressional hearings on war crimes, and hundreds of vets jammed into scheduled meetings with their own representatives. On Wednesday, the vets refused to stop sleeping right on the Mall, backed up by local law enforcement: Neither D.C. cops — many of them veterans — nor National Guard troops followed orders to evict the encampment: “There will be no such operation!” buzzed from tent to tent. Kerry, not camping with the rest, persuaded his friend, Sen. Edward Kennedy, to come meet the team. “I remember sitting down talking to them, that night there for … a period of an hour or so,” Kennedy said years later.

Two days later, Kerry was among the 800 veterans on the steps of the Capitol who threw back their medals, ribbons, and war memorabilia. “I was there, standing to the right of events, facing the Capitol, surrounded by guys who had a tough war,” Velvet said. ( Video of that day is all over internet.) A rarely-seen book Kerry wrote about that week, “The New Soldier,” is full of the photos described above and echoes “The New Veteran,” published in 1945 by the defunct American Veterans Committee, with its guarded optimism. “The New Soldier has come back determined to make changes without making the world more unjust in the effort to make it just.” Kerry’s State Department staff politely declined to comment for this article, or make Envoy Kerry available for an interview.

Unlike Winter Soldier, ODCIII got worldwide press coverage, with headlines like “Men of Conscience” and “The Veterans’ Crusade.” It even made the cover of Time magazine, with “A Week Against the War.” The Daily Dispatch, of New Kensington, Pennsylvania, called it “the most effective of all peace demonstrations Washington has seen.” These antiwar activists were less easily stereotyped as cowards; the week thrilled the anti-war movement and scared the Pentagon.

A few months later, Col. Robert D. Heinl sounded an alarm in the Armed Forces Journal. He described the 300-plus GI newspapers then being published in bases all over the world, and noted 14 anti-war GI organizations and “at least six” antiwar veterans’ groups operating openly in Vietnam. Heinl blamed stateside organizers and veterans’ groups, and specifically charged Sen. Ronald Dellums with “running a different sort of military production” by welcoming the VVAW to Capitol Hill. In doing so, he was acknowledging what ODCIII had shown the world — that the anti-war movement included many soldiers and veterans. Some question whether that movement actually shortened the war, but there’s little doubt that it changed the country.

This Friday, 50 years after those medals were thrown, some alumni will appear at a Zoom webinar called “The Historic Vietnam Veterans Protest in Washington: Lessons for Today,” chaired by David Cortright of the University of Notre Dame’s Kroc Institute for International Peace Studies. Cortright, who wrote one of the first books about the GI movement, “Soldiers in Revolt,” mentored the 2007 Appeal for Redress campaign against the war in Iraq and chaired the recent Keogh School panel on Winter Soldier.

As veteran and historian Gregory Daddis wrote last week, “The Vietnam Veterans Against the War deserve our contemplation, if not admiration. Today’s domestic terrorists cum veterans warrant only our shame and accounting.” Organized chapter by chapter, ODCIII got a bigger turnout than the “Stop the Steal!” rally, impressive for the pre-internet days. They also sought, and often got, dialogue with elected officials and wove music, poetry and even comedy into the week’s events. Instead of the undifferentiated roar of Jan. 6 — shouts punctuated by violence — the sounds of that week were songs, laughter and the murmurs of Gold Star families. I know which sounds I’d rather remember.