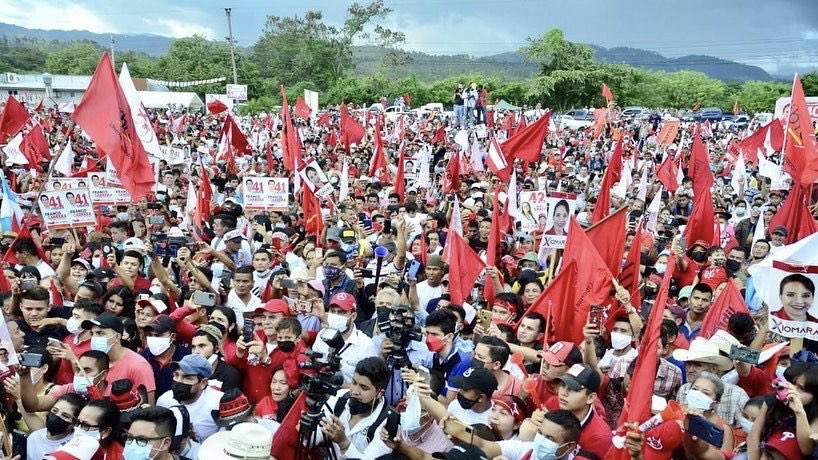 Above Photo: Supporters of the progressive Libre Party at a campaign event. The Libre presidential candidate Xiomara Castro is set to win the elections on Sunday November 28. Xiomara Castro / Twitter.

Ahead of Sunday’s elections in Honduras, Olivia Zúniga Cáceres, congresswoman of the Libre Party, talks about the violence, hate and intimidation suffered by candidates and members of the opposition.

On Sunday, November 28, 5.5 million Hondurans will participate in the general elections to elect the president, 128 deputies to the National Congress, 298 mayors, and 20 deputies to the Central American Parliament. The electoral process has been strongly criticized by members of the opposition and human rights organizations inside and outside Honduras due to the serious violation of the basic rights of the political opposition and the right of the people to a peaceful and legal electoral process.

For Olivia Zúniga Cáceres, congresswoman of the Party for Liberation and Refoundation (Libre) from the department of Intibucá, this is largely due to the political situation in Honduras over the last decade. “We have had eight years of the dictatorship of Juan Orlando Hernández and 12 years of the dictatorship of the National Party, so obviously this is not a normal process,” she explained.

In June 2009, the then president of Honduras Manuel Zelaya was overthrown in a military coup d’état that broke with the democratic order in the country and imposed what many classify today as “a narco-dictatorship” led by the National Party. The past 12 years have been characterized by the militarization of the country, the handing over of territories to private actors for the extraction of natural resources, the deterioration of the socio-economic conditions of the majority, cuts to the public sector, unbridled corruption, and mass migration outside of the country.

For the Libre Party, the slogan “they will leave” is key in this context as it seeks to put an end to this cycle that has undermined the well-being of the Honduran people in every sense of the word. Libre’s bid has received strong support, with its presidential candidate Xiomara Castro leading all opinion and voter intention polls. However, as Zúniga Cáceres recalled, those who have come to power through coups and fraud will not leave office without a fight, and she talked about the  “fear of the violence of the National Party, of the violence of those who feel defeated, who know they are going to lose the electoral process”.

According to the congresswoman from Intibucá, the atmosphere just days before the elections is “one of a lot of repression, persecution, criminalization and campaigns of hate, especially against women.” She herself has received constant threats and attacks from the hegemonic media, members, and supporters of the National Party, and the security forces in response to her unrelenting stance against acts of corruption and violence by the ruling party.

On November 14, the Office in Honduras of the United Nations High Commissioner for Human Rights (OHCHR) condemned acts of electoral violence following the murder of three mayoral candidates, Francisco Gaitán, Elvir Casaña, and Luis Gustavo Castellanos, on that day. The OHCHR denounced the killing of at least 28 people in political violence since the primary elections, and called on the actors involved to “conduct peaceful elections with respect for human rights.” On November 22, following the murder of two human rights defenders, the OHCHR issued another alert on the increase of political violence and the violation of human rights.

Xiomara Castro, the Libre Party’s candidate, has been a constant target of hate campaigns, threats and attacks by the ruling party and other forces. At a march organized on November 7 in Tegucigalpa by the National Party candidate, Nasry Asfura or “Papi”, his supporters carried a banner with a drawing of Xiomara stabbing a pregnant woman‘s stomach. At the march, the slogan was “Papi yes, communism no!”.

The representative of the Libre Party in the National Electoral Council, Rixi Moncada, who has the responsibility of guaranteeing a transparent and legitimate electoral process – as opposed to that of 2017 – has also been the target of “a huge smear campaign of hate, and above all the boycott of everything she has developed in this electoral process,” explained Zúniga Cáceres.

“The Fraud Has Already Begun”

The 2017 elections were condemned by many Honduran and international organizations and institutions as fraudulent due to irregularities in the counting process. The seemingly irreversible trend in favor of the opposition candidate Salvador Nasralla was reversed in favor of Juan Orlando Hernández after a blackout in the system. After that, the gap widened and the unexpected (and for many, invented) victory of Juan Orlando Hernández was consolidated. The obvious fraud motivated thousands to take to the streets, organizing takeovers and road blockades across the country to “fight in defense of the democratic principles so that the will of the sovereign, of the Honduran people, be respected,” recalled Zúniga Cáceres.

During these protests, more than 35 young people were killed in the streets by the security forces, and to date there has been no justice in any of the cases. “Today we hope that this same history will not repeat itself, that the will of the people prevails, that democratic principles prevail, and that we will not again see Honduran men and women murdered in the streets in a brazen manner, and repressed with tear gas, rubber bullets and with all kinds of extrajudicial imprisonment,” she emphasized.

The concerns about fraud, however, are not only about the vote count on the 28th, according to the congresswoman, but involve a long-term process. Many of these concerns already seem justified due to the”the buying of votes, and with the delivery of aid that was given by international cooperation agencies and from countries around the world during hurricanes Eta and Iota [in November 2020].”

She added that the political campaign of the National Party has been financed “by drug trafficking and with the money stolen from the COVID-19 pandemic with the infamous cases of the mobile hospitals.”

With the deployment of the military across Honduras, rumors are circulating that the armed forces are preparing for a prolonged crisis, and with memories of the violence of 2017 looming large, many fear for what may come after November 28.

According to the mainstream media, the electoral violence of 2017 was due to “terrorist riots” and the protesters were given “warlike treatment.” Zúniga Cáceres pointed out that the responsibility for the violence lay with “the National Party, the dictatorship, the oligarchic elites who do not want to give up their benefits, their privileges, and violence has never come from the people”.

She stressed on the fact that “We hope that we are going to be victorious, our call has always been for peace, that it be a democratic and civic celebration in which we know that the Honduran people are going to come out in a disciplined, orderly manner to exercise their suffrage”.

She also insisted that the opposition would defend the will of the people but will not give “into provocation … and this violent strategy that has been carried out against the Honduran people and against the Libre party, against Xiomara Castro and all the opposition candidates, the Libre candidates and [we demand] that there should be no more assassinations of political leaders.”