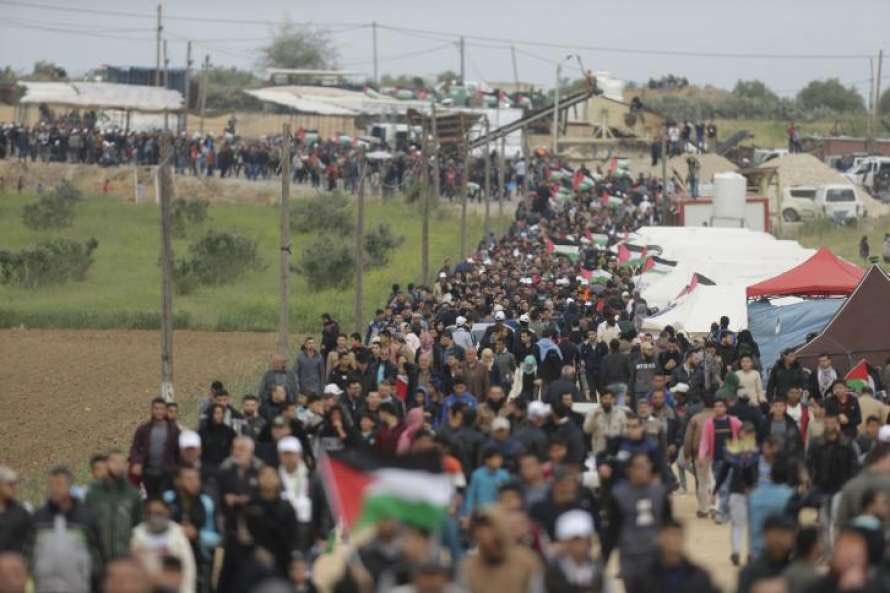 Update: The US continues to be Israel’s political protector even after this slaughter. Al Jazeera reports:

The United States has blocked a draft statement by the United Nations Security Council that called for an investigation into the killing of 17 unarmed Palestinian protesters near the Gaza Strip‘s eastern border.

The statement, which was proposed by Kuwait, demanded an “independent and transparent investigation” under international law into the bloody events on Friday’s Land Day protests.

The statement also expressed “grave concern at the situation at the border” and stressed “the right to peaceful protest”.

However, the US blocked the statement on Saturday, with US representative to the UN Walter Miller saying “bad actors” were using the “protests as a cover to incite violence” and to “endanger innocent lives.”

Note: Ma’an news reports that Saturday was a Day of Mourning for Palestinians. They write “Palestinians across the occupied West Bank launched a general strike on Saturday, shuttering all businesses and institutions in solidarity with the protesters in Gaza and in mourning of the 16 Palestinian civilians who were killed by Israeli forces in Gaza on Friday.”

Yesterday’s slaughter by Israel was on the “42nd anniversary of Land Day, when six Palestinian protesters were gunned down by Israeli forces in 1976, as they were protesting the Israeli government confiscation of thousands of dunums of Palestinian land.”

The Guardian reports that “Gaza hospitals, running low on blood and overstretched by the huge number of wounded, were reeling after one of the enclave’s bloodiest days outside of open war…”

Yesterday’s protest was  called “The Great March of Return,” hundreds of thousands of refugees peacefully demonstrated in Gaza for the right to return to their original homelands which were stolen from them and is now occupied by Zionists, who call their illegitimate nation Israel. Two million people live in Gaza, 70 percent are refugees who have been forced to leave their homes.

Ma’an reports that The Great March of Return will continue for six weeks until May 15, which marks the 70th anniversary of the Nakba, or catastrophe, when more than 700,000 Palestinians were expelled from their lands. Palestinians “have set up tents near the border and plan to move gradually closer to the border fence and erected dozens of signs in Arabic, Hebrew, and English, saying ‘We are not here to fight; we are here to return to our lands.'”

Human rights organizations are condemning Israel’s slaughter of unarmed, nonviolent protesters. Adalah, the Legal Center for Arab Rights in Israel, called for a criminal investigation. The Al Mezan Center for Human Rights also called for a criminal investigation and said that the Israeli military is violating both international and Israeli law by preventing Gaza emergency search and rescue teams from locating and treating casualties. Both groups also called on all threatening social media posts against Palestinians participating in the protests be removed. The Israeli human rights group B’Tselem issued a statement saying that Gaza is not a “combat zone” and stated shooting at demonstrators is a crime. B’Tselem also criticized Israel for ignoring the humanitarian disaster in Gaza and Israel’s responsibility for it.

The US-based Jewish Voice for Peace issued a statement exclaiming that it is horrified by the Israeli response to the #GreatReturnMarch, in which tens of thousands of Palestinian refugees in Gaza are marching peacefully inside of Gaza. They described it as disproportionate violence against popular protest by Palestinians yearning for a homeland. They also said media calling these  “clashes” at the Gazan border are “an inaccurate and biased description of the Israeli military’s violent response to nonviolent protest.”

United Nations Secretary General Antonio Guterres called yesterday for an independent and transparent investigation into the deaths and injuries along Gaza’s border with Israel.   KZ 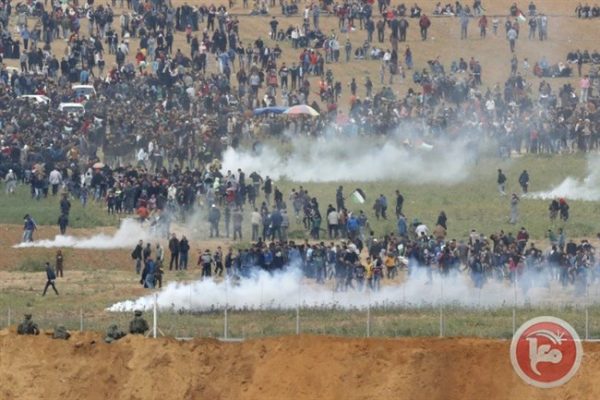 Dozens more wounded in second day of Gaza protests as condemnation over Israeli military’s use of live fire grows.

Israeli Prime Minister Benjamin Netanyahu has praised Israel’s security forces after the killings of 17 Palestinians in the Gaza Strip, just as condemnation over the Israeli army’s use of live ammunition against protesters grows.

In a statement on Saturday, Netanyahu thanked his troops for “guarding the country’s borders” and allowing “Israeli citizens to celebrate the [Passover] holiday peacefully”.

“Well done to our soldiers,” he said.

Several countries and rights groups have denounced the shooting of the Palestinian protesters, who demonstrated in their thousands along Gaza’s eastern border on Friday.

More than 1,500 others were wounded when Israeli forces fired live ammunition at protesters, used tear gas and rubber-coated steel bullets to push them back from the border area, according to the Palestinian health ministry.

On Saturday, 49 more people were wounded in the ongoing demonstrations.

Palestinian rights group Adalah said the Israeli army on Saturday “accidentally” took responsibility for the attacks on Palestinian protesters, before deleting a post from their official Twitter page.

“Yesterday we saw 30,000 people; we arrived prepared and with precise reinforcements. Nothing was carried out uncontrolled; everything was accurate and measured, and we know where every bullet landed,” a screenshot of the post, shared by Adalah, read.

In the aftermath of the protests, leaders in several countries denounced Israel’s actions.

“I strongly condemn the Israeli government over its inhumane attack,” President Recep Tayyip Erdogan said on Saturday during a speech in Turkey’s largest city, Istanbul.

Jeremy Corbyn, the leader of the United Kingdom’s opposition Labour Party, described the Israeli army’s use of force as “appalling”.

“The UK government must make its voice heard on the urgency of a genuine settlement for peace and justice,” he said in a statement on Twitter.

Similar statements were issued from the Jordanian government, which called the attacks a “violation of the Palestinian right to protest peacefully and the use of excessive force against them”.

However, the United States blocked the issuing of UNSC statement that condemned Israel’s use of force.

Walter Miller, US representative to the UN, said “bad actors” were using the “protests as a cover to incite violence” and “endanger innocent lives.”

Miller’s comments echoed the Israeli government’s stance towards Friday’s demonstrations, which blamed Hamas, the movement that governs the Gaza Strip, for the killings, saying they used “violent riots to camouflage terror”.

The mass protests, called the Great March of Return, were organised by civil society groups and supported by all political factions to call for the right of return of Palestinian refugees.

Palestinians in Gaza gathered in five different locations along the border with Israel, originally positioned about 700 metres away from a highly fortified fence.

UN Secretary-General Antonio Guterres has called for an “independent and transparent investigation” and reaffirmed “the readiness” of the world body to revitalise peace efforts.

Federica Mogherini, the European Union’s diplomatic chief, also called for an independent probe into the use of live ammunition by Israel’s military.

“The EU mourns the loss of life. Our thoughts are with the families of the victims,” Mogherini said in a statement on Saturday.

“The use of live ammunition should, in particular, be part of an independent and transparent investigation,” she added.

“Freedom of expression and freedom of assembly are fundamental rights that must be respected.”

Mansour al-Otaibi, Kuwait’s ambassador to the UN, issued a statement criticising the Security Council for failing to take action against Israel.

“People in occupied Palestine are disappointed that the Security Council met, but did not take action yet to stop this massacre and to hold those responsible to account,” the statement read.

Land Day is seen by Palestinians as a continuation of an ethnic cleansing campaign carried out by Zionist armed groups in 1948, when more than 750,000 Palestinians were driven off their lands in an event known to Arabs as the Nakba, or “catastrophe”.

Some 70 percent of Gaza’s two million population are descendants of the 1948 refugees.

Friday marked the beginning of a six-week sit-in demonstration leading up to the commemoration of the Nakba on May 15.

“When I saw the beauty of our stolen lands, the trees and the picturesque nature of it all, I wondered: why are we trapped here in a coop?” the campaign organiser, Ahmad Abu Artema, told Al Jazeera.

The developments come on the heels of months of anger over US President Donald Trump’s decision to recognise Jerusalem as Israel’s capital.

‘We want to return to our lands without bloodshed or bombs’

Video shows Palestinian shot dead with back to Israeli snipers