Above Photo: Belmarsh prison, where Assange is incarcerated.

I set out at dawn. Her Majesty’s Prison Belmarsh is in the flat hinterland of south east London, a ribbon of walls and wire with no horizon. At what is called the visitors centre, I surrendered my passport, wallet, credit cards, medical cards, money, phone, keys, comb, pen, paper.

I need two pairs of glasses. I had to choose which pair stayed behind. I left my reading glasses. From here on, I couldn’t read, just as Julian couldn’t read for the first few weeks of his incarceration. His glasses were sent to him, but inexplicably took months to arrive.

There are large TV screens in the visitors centre. The TV is always on, it seems, and the volume turned up. Game shows, commercials for cars and pizzas and funeral packages, even TED talks, they seem perfect for a prison: like visual valium.

I joined a queue of sad, anxious people, mostly poor women and children, and grandmothers. At the first desk, I was fingerprinted, if that is still the word for biometric testing.

“Both hands, press down!” I was told. A file on me appeared on the screen.

I could now cross to the main gate, which is set in the walls of the prison. The last time I was at Belmarsh to see Julian, it was raining hard. My umbrella wasn’t allowed beyond the visitors centre. I had the choice of getting drenched, or running like hell. Grandmothers have the same choice.

At the second desk, an official behind the wire, said, “What’s that?”

“My watch,” I replied guiltily.

So I ran back through the rain, returning just in time to be biometrically tested again. This was followed by a full body scan and a full body search. Soles of feet; mouth open.

At each stop, our silent, obedient group shuffled into what is known as a sealed space, squeezed behind a yellow line. Pity the claustrophobic; one woman squeezed her eyes shut.

We were then ordered into another holding area, again with iron doors shutting loudly in front of us and behind us.

“Stand behind the yellow line!” said a disembodied voice.

Another electronic door slid partly open; we hesitated wisely. It shuddered and shut and opened again. Another holding area, another desk, another chorus of, “Show your finger!”

Then we were in a long room with squares on the floor where we were told to stand, one at a time. Two men with sniffer dogs arrived and worked us, front and back.

The dogs sniffed our arses and slobbered on my hand. Then more doors opened, with a new order to “hold out your wrist!”

A laser branding was our ticket into a large room, where the prisoners sat waiting in silence, opposite empty chairs. On the far side of the room was Julian, wearing a yellow arm band over his prison clothes.

As a remand prisoner he is entitled to wear his own clothes, but when the thugs dragged him out of the Ecuadorean embassy last April, they prevented him bringing a small bag of belongings. His clothes would follow, they said, but like his reading glasses, they were mysteriously lost.

For 22 hours a day, Julian is confined in “healthcare”. It’s not really a prison hospital, but a place where he can be isolated, medicated and spied on. They spy on him every 30 minutes: eyes through the door. They would call this “suicide watch”.

In the adjoining cells are convicted murderers, and further along is a mentally ill man who screams through the night. “This is my One Flew over the Cuckoo’s Nest,” he said. “Therapy” is an occasional game of Monopoly. His one assured social gathering is the weekly service in the chapel. The priest, a kind man, has become a friend. The other day, a prisoner was attacked in the chapel; a fist smashed his head from behind while hymns were being sung.

When we greet each other, I can feel his ribs. His arm has no muscle. He has lost perhaps 10 to 15 kilos since April. When I first saw him here in May, what was most shocking was how much older he looked. 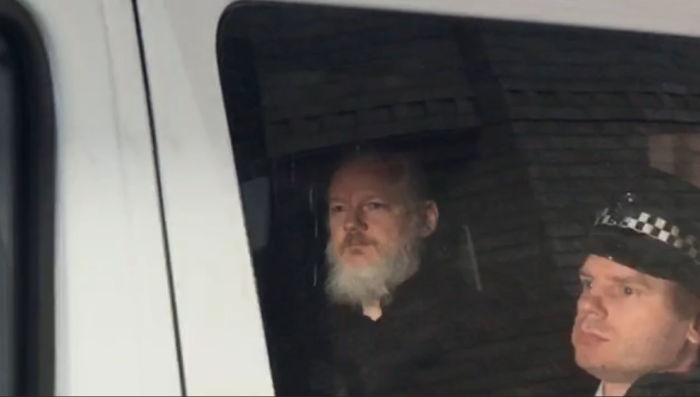 I said to him, “No you’re not. Look how you frighten them, how powerful you are.” Julian’s intellect, resilience and wicked sense of humor – all unknown to the low life who defame him — are, I believe, protecting him.  He is wounded badly, but he is not going out of his mind.

We chat with his hand over his mouth so as not to be overheard. There are cameras above us. In the Ecuadorean embassy, we used to chat by writing notes to each other and shielding them from the cameras above us. Wherever Big Brother is, he is clearly frightened.

On the walls are happy-clappy slogans exhorting the prisoners to “keep on keeping on” and “be happy, be hopeful and laugh often”.

The only exercise he has is on a small bitumen patch, overlooked by high walls with more happy-clappy advice to enjoy ‘the blades of grass beneath your feet’. There is no grass.

He is still denied a laptop and software with which to prepare his case against extradition. He still cannot call his American lawyer, or his family in Australia.

The incessant pettiness of Belmarsh sticks to you like sweat. If you lean too close to the prisoner, a guard tells you to sit back. If you take the lid off your coffee cup, a guard orders you to replace it. You are allowed to bring in £10 to spend at a small café run by volunteers. “I’d like something healthy,” said Julian, who devoured a sandwich.

Across the room, a prisoner and a woman visiting him were having a row: what might be called a ‘domestic’. A guard intervened and the prisoner told him to “fuck off”.

This was the signal for a posse of guards, mostly large, overweight men and women eager to pounce on him and hold him to the floor, then frog march him out.  A sense of violent satisfaction hung in the stale air.

Now the guards shouted at the rest of us that it was time to go. With the women and children and grandmothers, I began the long journey through the maze of sealed areas and yellow lines and biometric stops to the main gate. As I left the visitor’s room, I looked back, as I always do. Julian sat alone, his fist clenched and held high.

This article is based on an address John Pilger gave at a conference on Julian Assange in London on Thursday night after he had visited Assange earlier in the day.