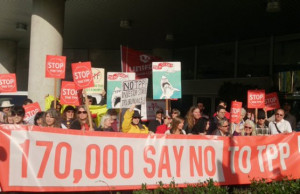 Above Photo: A small protest was held in Richmond on Monday to oppose the Trans Pacific Partnership trade agreement. Photo by @LeadNowCA

The trade agreement between 12 Pacific Rim countries has reopened the debate over free trade deals, pitting proponents of increased trade and fewer tarriffs and regulations against the likes of trade unions, environmentalists and those concerned about national sovereignty.

Touting the agreement as one that will foster more economic growth was B.C.’s Minister of International Trade Teresa Wat, who is also the MLA for Richmond Centre.

Wat said her ministry believes the TPP will result in an additional $538 million annually in exports and services from B.C. and 2,500 jobs.

As tariffs are reduced, she expects to see more port activity, as well.

Opposing the TPP at the meeting was ecological economist Dr. Tom Green, who stated the trade deal is not unlike others in that it fails to recognize environmental consequences of unfettered trade (for instance, manufacturing moves to countries with less environmental protection).

Among the people protesting outside was Open Media representative Meghan Sali, whose Canadian-based organization lobbies for Internet freedom.

“It violates our sovereignty under a cloak of secrecy and (the government) tells us we can have a say only now after the deal is already done,” said Sali.

Sali said the public meeting did little to allevieate concerns that the trade pact was signed after negotiations were shrouded in secrecy for years.

Canada’s Minister of International Trade, Chrystia Freeland noted that although Canada signed the TPP, it has yet to ratify it.

Meanwhile, the 50 or so members of the public who attended the four-hour meeting — hosted by government staff and several Members of Parliament — were met with heavy security and ID sign-in sheets at the doors.

Sali said she found it odd that the meeting was held in Richmond and not Vancouver.

She speculated the reason was so the federal RCMP could handle any protests and the relatively obscure location would prevent more people from attending.

Open Media contends the TPP unjustly extends copyright protection and will result in more notices of takedown on the Internet.

On the other side, major tech and Internet companies, such as Google and Apple, have touted the agreement for balancing copyright laws and the rights of individual creators with an open Internet.

The TPP has made odd bedfellows of U.S. presidential candidates Democrat Bernie Sanders and Republican Donald Trump. “It’s a deal that was designed for China to come in, as they always do, through the back door and totally take advantage of everyone,” said Trump, alluding to the fact China may sign the deal after it’s ratified.

The Canadian Union of Public Employees has echoed such concerns.

“Governments, not corporations, should set our country’s laws and policies.

The TPP stands in the way of immediate and bold action on climate change,” said CUPE National Secretary-Treasurer Charles Fleury.

Nevertheless, Wat contended, “we still have our own jurisdiction for our environmental protection.”

Another concern about the TPP comes from Doctors Without Borders, which has stated the trade pact will broadly extend intellectual property rights, including those for pharmaceuticals.

“The TPP is a bad deal for medicine: it’s bad for humanitarian medical treatment providers such as (Doctors Without Borders), and it’s bad for people who need access to affordable medicines around the world…”

Canadian farmers and automakers have also expressed opposition to the TPP, which is expected to lift tariffs on imported food and cars, bringing those costs down but putting domestic jobs at risk.