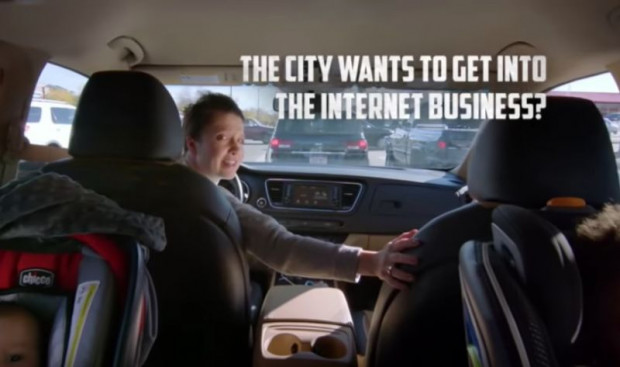 Voters in Fort Collins, Colorado, yesterday approved a ballot question that authorizes the city to build a broadband network, rejecting a cable and telecom industry campaign against the initiative.

Fort Collins voters said “yes” to a ballot question that gives the city council permission “to establish a telecommunications utility to provide broadband services,” The Coloradoan wrote. “Unofficial, partial returns as of 12:42 a.m. showed the measure passing with 57.15 percent of the vote.”

The vote doesn’t require the city to build a broadband network, but it gives the city council the permission it needs to move forward on the plan if it chooses to do so.

Industry groups tried to convince voters to reject the municipal broadband network; the city’s mayor called it a “misinformation” campaign by the broadband incumbents. “I was very encouraged with the passage today, and particularly with the headwinds of incumbents trying to misinform the electorate,” Mayor Wade Troxell said, according to The Coloradoan.

The anti-municipal broadband group, called “Priorities First Fort Collins,” spent $451,000 campaigning against the broadband network ballot question. Priorities First Fort Collins received nearly all of its funding from the Colorado Cable Telecommunications Association and a group run by the city’s chamber of commerce. Comcast is a member of both groups that funded the anti-municipal broadband campaign, while CenturyLink is a member of the chamber.

The pro-municipal broadband group in Fort Collins, the Fort Collins Citizens Broadband Committee, spent less than $10,000 in the campaign.

“This is another David vs. Goliath battle,” Glen Akins, who helped lead the Citizens Broadband Committee, told Ars last week.

We overcame the opponents’ massive, record-setting negative advertising campaign because we had a group of dedicated and passionate volunteers who believed in our cause. Our volunteers’ passion inspired our community and our community once again affirmed their desire for better broadband and denounced the influence of outsized spending campaigns in our local politics. Big money can buy ad spots and air time but it can’t buy votes in Fort Collins. Affordable, symmetric gigabit broadband will make Fort Collins an even more incredible place to live.

The anti-municipal broadband campaign had funded ads warning that a publicly funded network in Fort Collins would take money away from other infrastructure initiatives. The network would be funded by bonds, and supporters say it will be self-sustainable because of subscriber fees.

The Coloradoan editorial board urged voters to approve the ballot question but said that the city council should back out of the project if it turns out to be too expensive. The newspaper’s editorial board later accused the anti-municipal broadband campaign of taking its editorial out of context in a campaign mailer.

Troxell said he was disappointed that the Chamber of Commerce “play[ed] an active role in misinformation.”

Comcast and CenturyLink did not comment when we contacted them about the campaign last week.

Colorado has a state law requiring municipalities to hold referendums before they can provide cable, telecom, or broadband service. Yesterday, voters in Eagle County and Boulder County authorized their local governments to build broadband networks, “bringing the total number of Colorado counties that have rejected the state law to 31—nearly half of the state’s 64 counties,” Motherboard wrote today.

Another 16 municipalities also voted to opt out of that Colorado law yesterday.

Fort Collins already took that step in 2015 with a ballot question that passed with 83 percent of the vote. Yesterday’s vote took the further steps of amending the Fort Collins city charter and authorizing the city to issue securities and other debt to fund a network.

Municipal broadband also played a role in the Seattle, Washington, mayoral race. Comcast Cable and CenturyLink each donated $25,000 to a political group that is run by the Seattle Chamber of Commerce; the chamber group campaigned for mayoral candidate Jenny Durkan, who argues that the city cannot afford to build its own broadband network.

Durkan defeated opponent Cary Moon with 61 percent of the vote, The Seattle Times reported. Moon had vowed to push for a municipal broadband network if she won the race.