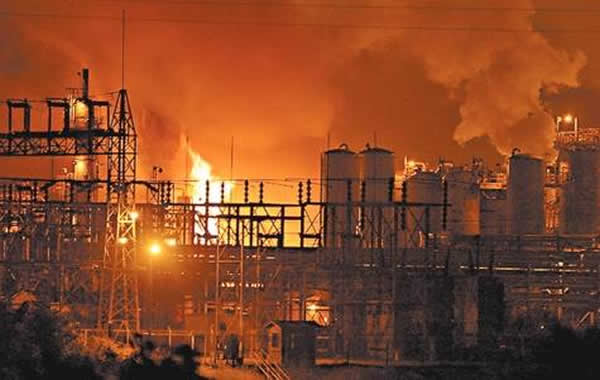 Above photo: Explosion at Bayer Institute in 2008.

Five years after the deadly explosion in the BAYER Institute plant, West Virginia still ignores a plan for tougher chemical oversight which was worked out by the Chemical Safety Board. Meanwhile, 300,000 residents are still without usable water after a chemical spill.

Three years ago this month, a team of federal experts urged the state of West Virginia to help the Kanawha Valleycreate a new program to prevent hazardous chemical accidents.

The U.S. Chemical Safety Board recommended the step after its extensive investigation of the August 2008 explosion and fire that killed two workers at the Bayer CropScience plant in Institute.

Since then, the proposal has gone nowhere. The state Department of Health and Human Resources hasn’t stepped in to provide the legal authority the Kanawha-Charleston Health Department needs to start such a program. And KanawhaCounty officials never funded the plan, and seldom mention that the CSB recommendation was even made.

Now, with more than 300,000 residents across the Kanawha Valley without usable water following a chemical accident at Freedom Industries on the Elk River, some local officials say it’s time for action.

“We’d had their recommendation on the books for several years now,” said Dr. Rahul Gupta, director of the local health department. “This gives us another opportunity to look at what they recommended.”

During a press conference Saturday night, Gov. Earl Ray Tomblin said he would work with the state Department of Environmental Protection to consider tighter regulation of chemical storage facilities in the ongoing legislative session.

“There are certain reporting things that companies have to do,” the governor told reporters. “And I do think we have to look at them to make sure this kind of incident does not happen again.”

But so far, neither the governor’s office nor the DHHR have responded to a specific question from the Gazette about whether they would move to implement the CSB’s recommendation.

The CSB’s proposal for a new “Hazardous Chemical Release Prevention Program,” was the central recommendation in the agency’s lengthy report on the Bayer explosion. Board members repeated the recommendation again in September 2011, when they released a report on a series of accidents that killed one worker at the DuPont Co. plant in Belle.

The recommendation, modeled after a highly successful chemical safety law in Contra Costa County, Calif., would require companies to submit safety plans, require regular government safety audits of plans, and give the public a greater say in monitoring safety performance at local companies. Theoretically, the program would be funded by a fee paid by companies that make, use and store dangerous chemicals.

“Like Contra Costa County, the Kanawha Valley has many facilities that handle large quantities of hazardous materials, some of which are acutely toxic,” the CSB said in its 169-page report on the Bayer explosion. “Furthermore, the valley contains environmentally sensitive areas such as the Kanawha River, which is an important transportation corridor.

“Yet, the local government does not have the authority to directly participate in facility safety planning and oversight even though many community stakeholders have long campaigned for such authority and involvement,” the report said. “The local government could adopt regulations and implement a program similar to Contra Costa County that would likely improve stakeholder awareness and improve emergency planning and accident prevention.”

Under the board’s recommendation, the DHHR would use its existing legal authority for rules governing “occupational and industrial health hazards” to assist the Kanawha-Charleston health agency in setting up the program – not just for theKanawha Valley, but for industry across the state.

After the board’s recommendations, the Kanawha-Charleston Health Department embraced the proposal, but worried other important parties – the state and industry – would oppose it.

“I don’t think it’s going to be very difficult to develop a program,” Gupta said in January 2011. “The real question is, are people going to play.”

A few months later, in June 2011, then-DHHR Secretary Michael Lewis told the CSB that his agency and the state Department of Environmental Protection had decided not to move forward with the CSB recommendation.

“We came to a consensus that we did not, at this time, have the expertise in-house to draft the appropriate legislation that would be needed to develop the type of program suggested in your report,” wrote Lewis.

Lewis said that his agency would approach the governor’s office and see if lawmakers would study the issue.

It was not immediately clear over the weekend what happened to that potential study – but DHHR has not moved forward with a chemical accident prevention plan of any kind,and the CSB lists the recommendation on its website as “open.”

Industry groups, including the American Chemistry Council, had opposed the CSB recommendation, saying it would “create unnecessary redundancies, as well as the imposition of additional economic burdens on local industries, communities and state governments.”

“Given the existing federal agency oversight with mandated industry regulations, we contend the West Virginiaenvironment is better served through effective execution and compliance oversight by the current agencies,” wrote Karen Price, who was then president of the West Virginia Manufacturers Association, in a letter to the CSB.

CSB officials, though, noted that inspections at local chemical plants by federal officials are rare – the U.S. Occupational Safety and Health Administration hadn’t inspected DuPont’s Belle plant for more than five years when the fatal phosgene leak occurred in January 2010, for example.

OSHA had never inspected the Freedom Industries location, and the state DEP hadn’t been there since 1991, when it was a different sort of facility owned by a different company, officials have said.

On Saturday, CSB officials announced — under pressure from Carper and from Sen. Jay Rockefeller, D-W.Va., — that they were deploying a team to Charleston to investigate the Freedom Industries chemical accident.

But in email interviews over the weekend, CSB officials said they were being cautious about drawing too many conclusions yet about connections between their chemical safety recommendations and the latest Kanawha Valleychemical accident.

Daniel Horowitz, the CSB’s managing director, said the focus on the previous recommendation was on what he called “highly hazardous chemicals” such as those involved in the deadly Bayer and DuPont incidents.

“It would have to be determined through further investigation what are [the] hazards of the materials at terminal and storage sites like Freedom Industries, what kinds of regulatory and inspection programs are in place, and what are the opportunities for preventing this sort of serious incident in the future,” Horowitz said.

But, while the CSB recommendation did specify “highly hazardous” chemicals, it also said that once the program was started, local experts and citizens could work together to “define the characteristics of chemical facilities that would be covered.”