Wage Inequality Continued To Increase In 2020

Above Photo: Labor activists hold a rally in support of raising the minimum wage to $15 an hour on the National Mall on May 19, 2021 in Washington, DC. Members of the Service Employee International Union (SEIU) organized the rally in support of striking McDonald’s workers who are demanding a wage increase. Common Dreams / Kevin Dietsch / Getty Images.

Two features of the pandemic economy distorted wage patterns in 2020 and led to faster wage growth, especially at the top. One feature was that inflation grew at a subdued 1.2% rate, boosting the average real wage (but not affecting distribution). A second feature was that, as employment fell (the number of earners fell by 1.7 million, or 1.6%) and unemployment rose (to 8.1%), the composition of the workforce changed. Specifically, job losses were heaviest for lower wage workers so the mix of jobs shifted toward higher paying ones, artificially boosting average wages (see Gould) and generating faster measured wage growth especially in the bottom half.

This continuous growth of wage inequality undercuts wage growth for the bottom 90% and reaffirms the need to place generating robust wage growth for the vast majority and rebuilding worker power at the center of economic policymaking. See Mishel and Bivens (2021) for the evidence that an erosion of worker power due to excessive unemployment, eroded collective bargaining, corporate-driven globalization, weaker labor standards, new employer-mandated agreements (such as noncompetes), and supply-chain dominance explains wage suppression and wage inequality growth.

These are the results of EPI’s updated series on wages by earning group, which is developed from published Social Security Administration (SSA) data and updates the wage series from 1947–2004 originally published by Kopczuk, Saez, and Song (2010). This data, unlike the usual source of our other wage analyses (the Current Population Survey), allow us to estimate wage trends for the top 1.0% and top 0.1% of earners, as well as those for the bottom 90% and other categories among the top 10% of earners. This wage data is not top-coded, meaning the underlying earnings reported are actual earnings and not “capped” or “top-coded” for confidentiality. These SSA wage data are W-2 earnings which include realized stock options and vested stock awards. 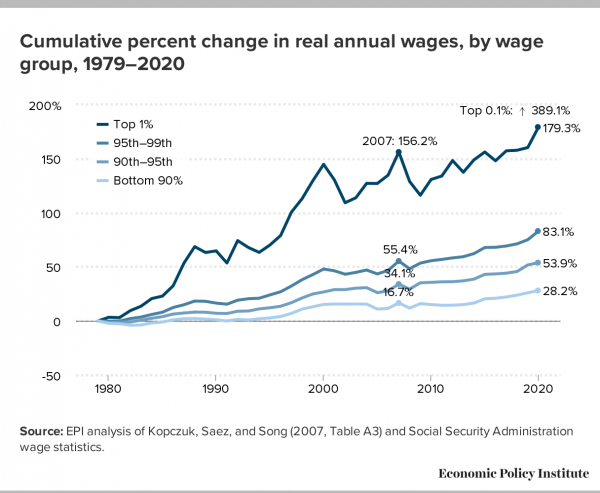 One constant wage dynamic in every period since 1979 has been that the wages for the bottom 90% are continuously redistributed upwards. 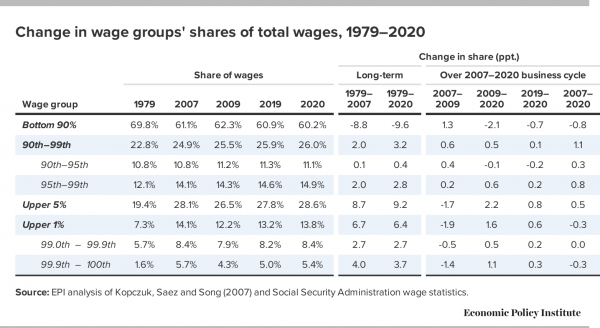