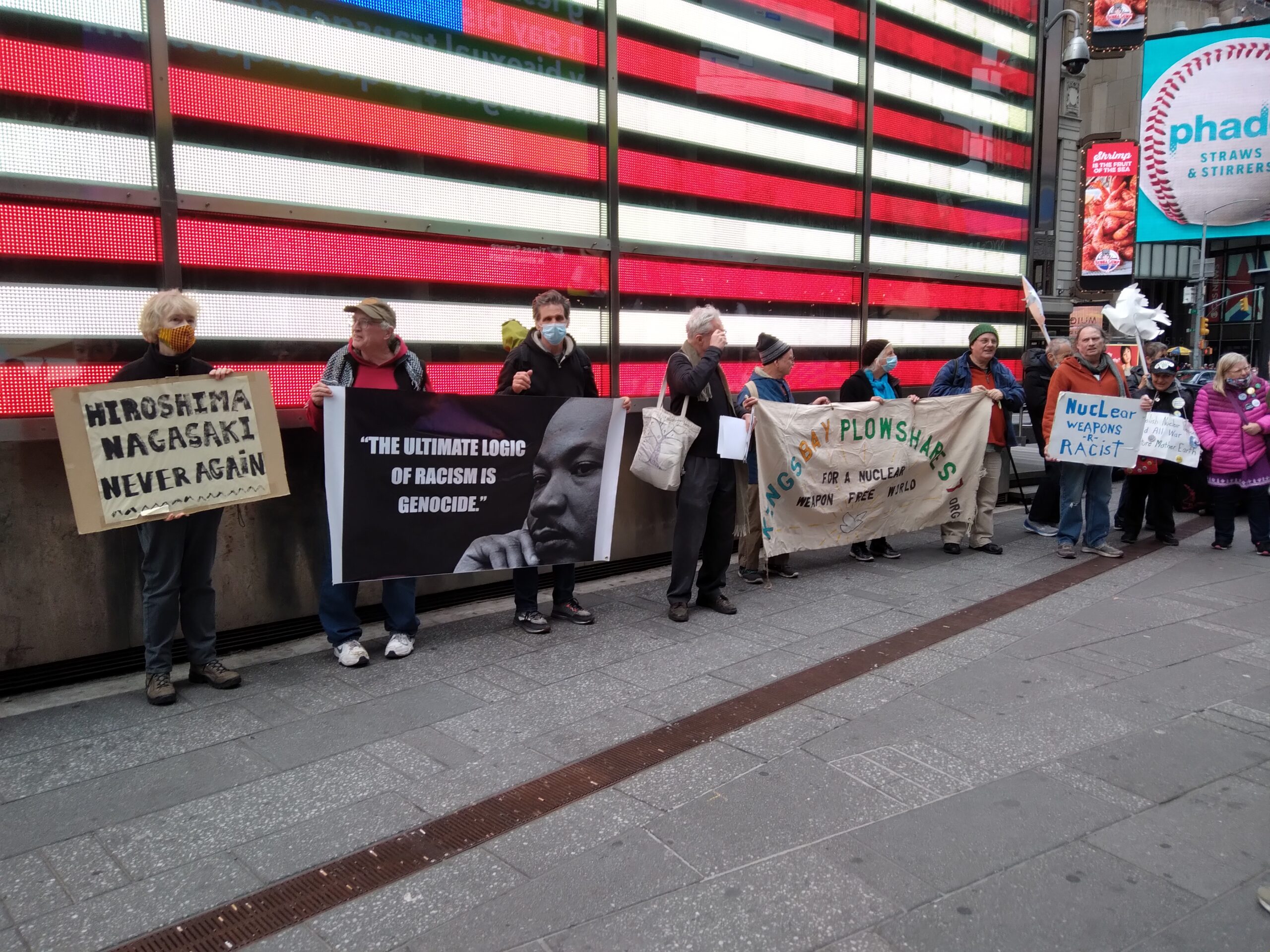 Above Photo: Antiwar activists taking part in the Walk for Peace and Nuclear Abolition on April 4, 2022 in New York City. WNV / C.R. Spicer.

Four years after breaking into the largest nuclear submarine base, members of the Kings Bay Plowshares continue to protest nuclear weapons.

Called to enact the Old Testament prophecies of Isaiah and Micah, Plowshares activists seek to “turn swords into plowshares, spears into pruning hooks and train for war no more.” It was this call to action that led Clare Grady, Martha Hennessy, Liz McAlister, Mark Colville, Carmen Trotta, Steve Kelly and Patrick O’Neill to enter Kings Bay Naval Base in St. Marys, Georgia on April 4-5, 2018.

Once inside, the activists split into three groups. One (composed of Trotta, Kelly and McAlister) went into the fatal force zone, investigating the bunkers housing nuclear weapons. Meanwhile, Grady and Hennessy put up crime tape and carefully poured blood at the entrance to the administrative building as a symbol — according to Grady’s affidavit — of “offering life” and “withdrawing consent.” They then joined Colville and O’Neill at what they called a nuclear weapon shrine. As O’Neill struck the shrine, Colville dismantled an illuminated sign that said “Strategic Nuclear Weapons,” writing messages on it that included “Idol,” “Love your enemies” and “Swords Into Plowshares.”

“Did you have a wrangle with your supervisor to be here?” Colville asked Trotta in the midst of 30 supporters gathered at the corner of the Riverside Church in New York City on April 4. Along with Hennessy and Grady, it seemed none of the four Plowshares had asked permission to attend the day’s Walk for Peace and Nuclear Abolition. The other three Plowshares cheered them on from a distance. While McAlister couldn’t attend and O’Neill only missed out due to an Amtrak cancellation, Kelly remains underground since violating the conditions of his release last Spring.

After Hennessy came up with the idea for the walk, planning was conducted by filmmaker Anthony Donovan. His 2015 documentary “Good Thinking: Those who Tried to Halt Nuclear Weapons”  informed much of the day’s activities.

Ellen Grady (Clare’s sister), said their intention with the walk was to acknowledge both the fourth anniversary of the Kings Bay action and the 55th anniversary of Martin Luther King Jr.’s “Beyond Vietnam” speech. Delivered at Riverside Church in 1967, King called for a “revolution in values,” while identifying society’s triplets of evil: racism, extreme materialism and militarism. King was assassinated exactly one year later.

Before the walk began, Clare Grady introduced indigenous activist Owl, who spoke in the indigenous Lenape language honoring “the one who created us from thought,” and welcoming the crowd to the land where 800 languages are now spoken. Riverside Church Senior Minister Amy Butler addressed walkers with words from bell hook’s “All About Love,” **while also quoting King’s “Beyond Vietnam” speech.

Soon after starting the walk, the group stopped at the nearby childhood apartment of Sister Megan Rice — a member of the Transform Now Plowshares, who passed away last year. “There was no one like her,” said longtime peace and justice activist Paul Magno. The FBI came to his office one day at the Washington Peace Center looking for Rice, who happened to be sitting right beside him. “You mean her?” he said, before advising them to come back when they have a warrant.

The next stop on the walk was Corpus Christi, the church where Catholic monk Thomas Merton had his conversion. “We can talk another time about the influence of his Letter to a Young Activist,” said a supporter from the steps. “And the fact the government probably killed him,” Colville added. “Have you read much of Merton?” Carmen asked him. “Where’s a good place to begin?” Colville suggested Merton’s autobiography, “The Seven Story Mountain” as well as collections of his more personal writings.

Two blocks further, at Columbia University, the group climbed the steps to the entrance of Pupin Hall, home to the country’s first cyclotron (a type of particle accelerator), which gave experimental proof of nuclear chain reactions. Early researchers understood that such reactions could be used to make an explosive. A passing student told us about the K=1 Project, which has brought students to the Marshall Islands for an independent study of the contamination left from the 67 nuclear bombs detonated between 1946 and 1958.

At the nearby Buddhist Church on Riverside near 103rd St., there stands a weathered bronze statue of the sect’s founder that survived the atomic blast in Hiroshima. It was brought to the United States in 1955 as a peace offering. A professor and singer named Dana shared of her walk in Japan and led everyone in a song of peace.

While resting at the Eleanor Roosevelt Memorial on 72nd Street, Colville related a story  about the Kings Bay Plowshares 7 that apparently had not been shared before. According to Colville, the original plan was to hold their action on Martin Luther King’s birthday, Jan. 15.

“We cut in [through the fence], and we’re walking on the base for hours,” he explained. As they tried to find the docks — where the nuclear-armed submarines were housed — they carried hammers made of repurposed machine guns, a copy of Daniel Ellsberg’s “The Doomsday Machine,” crime tape, and an indictment developed by lawyers including former Attorney Gen. Ramsey Clark, as well as their own blood. When the submarines could not be located, some were ready to leave.

“And we got into a big fight,” Hennessy interjected.

After leaving the base undetected at 4:30 in the morning — and not really accomplishing what they had intended — some of the group decided they need to go back. Colville recalled telling his wife, “These people are crazy!”

“We didn’t read the maps right,” Mark said. “The breakthrough came when, during the subsequent visit, we located what we refer to as the ‘missile shrine.’ Once we found that, we knew the bunkers were fairly close. Martha and Clare, their attention was always focused on the administrative building, and it was closer to the shrine than I had anticipated.”

Later in the walk, after some had gone ahead by car or subway, the group met at Times Square, where they read a portion of King’s “Beyond Vietnam” speech. Veterans for Peace member Tarak Kauff then spoke about his upcoming April 26 trial in Ireland, relating to his 2019 arrest for protesting U.S. war planes at Shannon Airport.

During the final leg of the walk, Trotta and Colville held a banner depicting King and his quote “the ultimate logic of racism is omnicide.” As the group rounded the corner to the United Nations, we halted to observe a moment of silence at the memorial to Bayard Rustin, organizer of the 1963 March on Washington for Jobs and Freedom. After five hours of walking, the group posed for photos on the steps at the Isaiah Wall and gave thanks for the reception in the streets of New York. In a closing ritual, Clare Grady modeled a consensual blessing and hug, noting the powerful role of community in ending the threat of nuclear war.

The global movement for disarmament is winning a reckoning. The U.S. obligations under the Non-Proliferation Treaty may be ignored by the White House, but not by Kings Bay Plowshares defendants. Knowing that judicial review sometimes favors activists, they have filed an appeal to the Supreme Court of the United States, seeking to have their charges dismissed under the Religious Freedom Restoration Act. Such a dismissal would vacate their probations and fines — and be in keeping with the district court judge’s opinion that the Kings Bay Plowshares “engaged in symbolic, prophetic, sacramental de-nuclearization.” The anniversary of Dr. King’s “Beyond Vietnam” speech has inspired many activists to make clear — as the Kings Bay Plowshares 7 have done — that threat-based “peace” has become the insane norm and must be stopped.