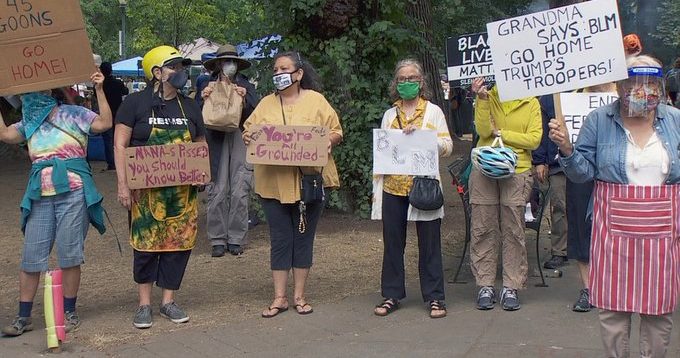 Portland, Ore. — The protests have drawn people from all walks of life, and on Friday night, veterans from all over showed up downtown to create a “Wall of Vets” to protect protesters.

And they showed up in white shirts to support the Black Lives Matter movement.

The 'Wall of Vets PDX' (@VetsWall) have arrived, standing at the position of parade rest in front of the federal courthouse. They are a veteran activist group here to support #BLM. #PortlandProtest #PDXprotests #Blacklivesmatter pic.twitter.com/BpHEHwSuc7

“It’s something I believe in. The other vets here — this is the first time they’ve come down; they don’t like crowds either; we believe in something; it’s time to stand,” said Jonathan Fisher, a veteran of the U.S. Coast Guard.

Veterans responded after the Navy veteran, Chris David, seen on video being beaten by federal officers, called for them to join.

Meanwhile, a group of grandparents also held a rally Friday.

They met outside the federal courthouse wearing aprons and holding signs.

They also formed their own Wall of Grandparents.

“We can turn on our television and keep watching people getting killed in cold blood, and we’re just supposed to sit back and not feel any kinda way about it,” said one protester. “I have grandchildren, and I want a different world – period –for all of us.”

Another group — similar but not quite the same — also made their voices heard downtown Friday.

A group of women in their golden years calling themselves the “Raging Grannies” staged a demonstration earlier too.

One of the grannies said she’s fed up with the federal presence in Portland.

The protests have also drawn The Wall of Moms and a nude woman dubbed the “Naked Athena.”

But protesting is nothing new to the grannies. They’ve been together since 2012.