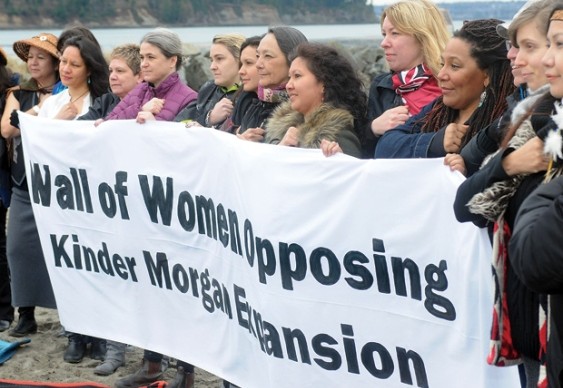 Kinder Morgan now has to get past a “Wall of Women”, in addition to other obstacles to its pipeline expansion plans.

Cardinal, who starred in Dances with Wolves (1990), Legends of the Fall(1994) and Black Robe (1991), grew up drinking water from the rivers and lakes near Fort McMurray and the changes that have taken place since Canada’s bitumen boom, make her crazy, she said. This is what inspired her to travel from Toronto to oppose the Kinder Morgan pipeline expansion in Vancouver.

“It was a pain in my being for many years. I felt hopeless and desolate because nobody believed me,” she said, of the environmental destruction she warned was happening in Alberta’s tar sands.

“Nobody wanted to hear about it. People were making money and living the life. I was a wild-eyed actress who had no sense of reality. Going back, it was all poison, I couldn’t see myself living there. It was filled with all these people from all around the world, their eyes were on fire with all the money they were making.”

Cardinal and the other activists stood on the beach Ambleside Park on a cold, rainy Saturday morning, preparing to up the ante on their fight to stop the American pipeline company from bringing more tar sands bitumen from Alberta through to the coastal waters of Vancouver.

To Cardinal, the real issue is water.

“Water is the central core issue,”  Cardinal said, her back to English Bay.

As for Kinder Morgan, “they’re just part of the ball of energy that has been destructive from the very beginning.”

“It’s the same energy as Harper and his new finance minister, Joe Oliver… Oh, my God,you know?” Cardinal shook her head, her dark brown eyes filled with a look of consternation.

“They really see themselves as manifest destiny, the lords of the earth — and that’s insane.”

“They might be considered all powerful and come out with their guns but we as human beings, it’s our responsibility to stand in protection of that life force that’s water. Part of that club.  I haven’t heard anything that makes it sound like Joe Oliver understands the sacredness of water.  Not from him.

“As far as I’m concerned, they have no right.”