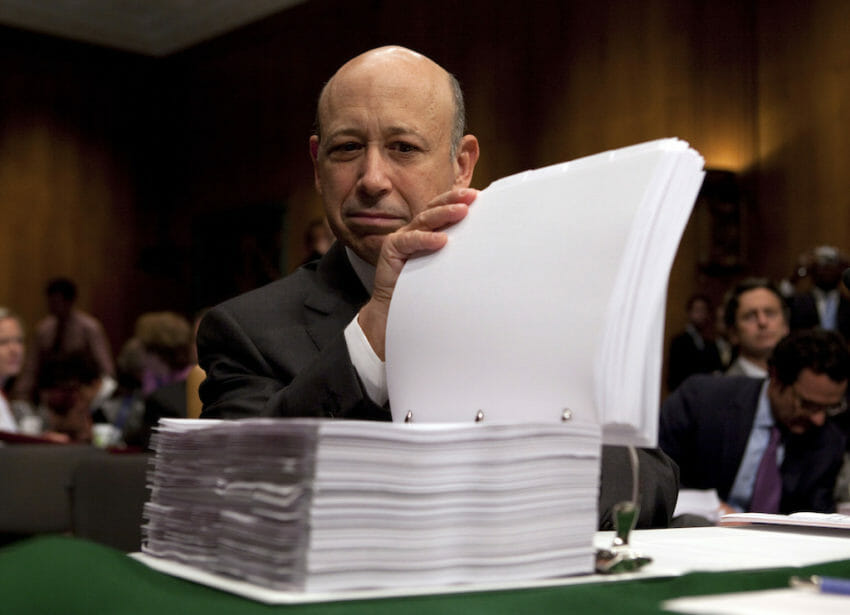 Above Photo: Goldman Sachs Chairman and CEO Lloyd Blankfein examines a report on his company by the Senate Permanent Subcommittee on Investigations before a 2010 hearing on Wall Street investment banks and the financial crisis. (AP)

Goldman Sachs has outdone itself this time. That’s saying a lot for an investment firm that both helped cause and then exploited a global economic meltdown, increasing its own wealth and power while helping to boot millions of Americans out of their homes.

But now Goldman Sachs is openly saying in financial reports that curing people of terrible diseases is not good for business.

I wish this were a joke. It sounds like a joke. In fact, I’ll show you later that it used to be one of my favorite jokes. But first, the facts.

In a recent report, a Goldman analyst asked clients: “Is curing patients a sustainable business model?” Salveen Richter wrote: “The potential to deliver ‘one-shot cures’ is one of the most attractive aspects of gene therapy. … However, such treatments offer a very different outlook with regard to recurring revenue versus chronic therapies. … While this proposition carries tremendous value for patients and society, it could represent a challenge for genome medicine developers looking for sustained cash flow.”

Yes, a Goldman analyst has said outright that curing people will hurt their cash flow. And he said that in a note designed to steer clients away from investing in cures. Can “human progress” have a bottom? Because if so, this is the bottom of so-called human progress—down where the mud eels mate with the cephalopods. (Or at least that’s how I picture the bottom.)

This analyst note is one of the best outright examples I’ve ever seen of how brutal our market economy is. In the past, this truth would not have been spoken. It would’ve lived deep within a banker’s soul and nowhere else. It would’ve been viewed as too repulsive for the wealthy elite to say, “We don’t want to cure diseases because that will be bad for our wallet. We want people to suffer for as long as possible. Every suffering human enriches us a little bit more.”

We’re circling the drain in the toilet bowl, and as you know, the contents speed up as they near the end, the event horizon. We are beginning to see more and more how disgusting a profit-above-all-else economy really is. When Donald Trump bombed Syria, the stocks of weapons contractors shot up. That spike in stocks is a spike in the gravity of capitalism, pulling people toward death and destruction. Profit has power. And its power is exerted on the society as a whole.

Furthermore, there is no debate about this on your mainstream outlets. There is no discussion as to whether war profiteering is what we really want out of our society. None. You tell me: How many perfectly coiffed CNN or Fox News hosts stated: “Weapons contractors benefited from our bombing. Isn’t that revolting? Doesn’t that just make you gag in your soup? Doesn’t that mean we’ve created an upside-down system that rewards barbaric bullshit?”

You will not hear that discussion. You’re more likely to hear them discuss the best blind pingpong player to ever star in a short film about self-harm. Hard news topics do not see the light of day on our suffocated corporate airwaves.

And believe it or not, the Goldman note gets even worse. The analyst says, “In the case of infectious diseases such as hepatitis C, curing existing patients also decreases the number of carriers able to transmit the virus to new patients. …”

Decreases the number of carriers? Goldman Sachs … is in a financial partnership … with fucking infectious diseases.

Let that sink in. Sit with that and decide whether you want to keep your seat on spaceship earth. I’ll wait.

When I first read about this—after I stopped choking on my tongue—I realized it made more sense than I first thought. I’ve always felt Lloyd Blankfein had a striking resemblance to Hepatitis C. But it turns out he just works with Hepatitis C. They’re just really close friends and business partners. (But I heard Ebola is the godfather to his kids.)

Our aggressive strain of unfettered capitalism has blasted beyond satire in many ways. In one of my favorite Chris Rock specials, “Bigger & Blacker,” which I first saw when I was a teenager, he had a joke that blew my mind. He said something like, “They ain’t never gonna cure AIDS. They ain’t nevergonna cure AIDS. There’s too much money in it. The money’s not in the cure. The money’s in the comeback! The money’s in the comeback.”

And I found that bit hilarious. I loved it. Because I thought it was a joke. Now, I see—it ain’t no joke. He’s goddamn right. They aren’t even trying to cure infectious diseases that make them piles of cash. Instead, the moneyed interests are complaining to their clients that they need to avoid curing these diseases. Because not only do they lose money on the patient who no longer needs meds, they also lose money because that patient won’t pass the disease onto others.I swear these drug companies are roughly two weeks away from just going, “Hey, what if we send Bruce—that guy in the copy room—out to stab people in the back of the neck with infected needles? Is that over the line? Because that would increase our cash flow. And not only do we make money from the newly infected person, but they’re likely to pass it on to other people. How great is that?”

A profit-driven world creates a disgusting reality with a contorted value system. A world where oil companies view oil spills that destroy whole coastal communities as the price of doing business. In fact, they even declared it’s good for the local economy. A world where millions of animals abused for their entire lives is just the price of doing brunch. A world where massive hurricane destruction is a business opportunity rather than a tragedy. “Honey, check the weather report. Are there any 155-mile-per-hour business opportunities ripping through any Caribbean islands?”

And now corporations no longer fret over government interference—because they own the government. For them to worry about that would be like you worrying that your carpet might stop you from going out to a movie this evening. I think we’ve established what the carpet does. It lays there. Corporations now spew forth their true goals and motivations without much concern for the backlash. They can do things like use attack dogs on protesters at Standing Rock and not worry about the consequences. Who cares? The worst that could happen to them is they pay a fine—a “sorry we bit you with vicious man-eating dogs” fine.

We have a value systems disorder. A large percentage of our society now views this Goldman Sachs-style thinking as acceptable. It should be viewed as equally grotesque as beating someone over the head and then selling them bandages. Now imagine that’s your company’s business model. And you get investors to help you achieve it. Next to a glowing PowerPoint presentation you say, “You guys help me pay for the baseball bat. I’ll beat people over the head with that bat. My bat-swinging skills are well documented. I then sell the bloodied victims our top-shelf bandages. And with little effort on your part, you get a cut of the profits. It’s a rock-solid investment.”

That’s how we need to view what Goldman Sachs is saying in this analyst note.

The only way a system ends up at this point—with our values this far upside down—is with endless advertising in a profit-driven society. This is a system built on the exploitation of others for gain. There was no time when that was not true. And that’s why we need a revolution of the mind.