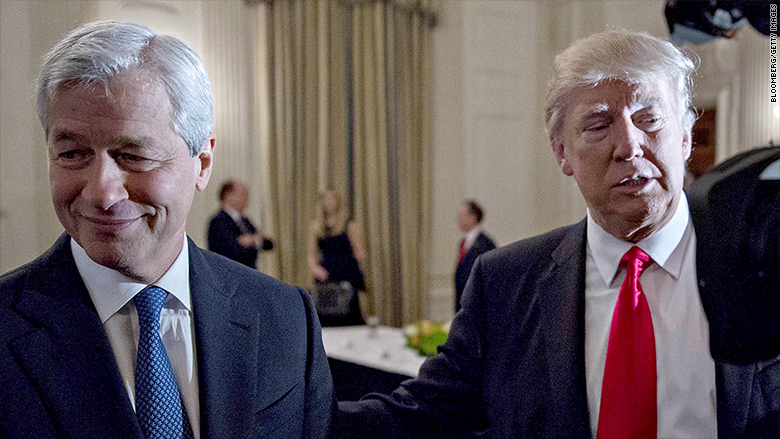 Wall Street Moving To Make A Mint Off The Mail, JPMorgan Postal Bank

Above photo: JPMorgan CEO Jamie Dimon (left) is greeted by President Trump during a meeting of CEOs advising the White House on economic policy.

Imagine if activists and elected officials were clamoring for emergency provision of food and McDonald’s offered to place a drive-thru window in every post office. Calling it #postalfood. That makes as much sense as JPMorgan’s Chase recent attempt to place its own ATMs in every post office and call it #postalbanking. According to recent reports, Chase  — the largest bank in the United States, with $3.2 trillion of assets — has offered to lease space from USPS in exchange for the “exclusive right” to solicit postal banking customers.

First off, let’s be clear: this is not “postal banking.” As Mehrsa Baradaran told Fast Company right after the news broke, “having a private middleman defeats the entire purpose of postal banking, which is a public bank competing against banks like JPMorgan Chase.” Although some advocates have discussed ways private sector entities might facilitate postal banking —  aiding in the provision of savings and checking accounts, electronic money transfers, cash and coin conversion, bill payment services, etc. —  most proposals envision USPS, in conjunction with the Federal Reserve or the Treasury Department, taking the lead and retaining control.

That’s because postal banking is about building on the core fact that USPS is legally required to serve everyone at uniform price and quality, without centering the profit motive…like Chase does. Even if Chase were to successfully place an ATM in every post office branch, people without the appropriate accounts would still be unable to use them. And people without Chase accounts wouldn’t be able to use the ATM without paying higher fees. Although many advocates envision postal branches housing ATMs, the plan would entail free usage, at least for people using Treasury Direct Express cards and other government payment services. From a financial inclusion standpoint, Chase’s proposal accomplishes nothing — except for giving an already large and powerful bank an unfair advantage.

Secondly, the involvement of a multinational bank complicates the privacy and security dimensions of postal banking. As a general rule, unlike private businesses, USPS only collects information necessary to satisfy a statute or executive order. Legal firewalls prevent USPS from sharing information with other government agencies, to say nothing of third party corporations. But if Chase has access to the data, these protections collapse.

Finally, as TOWS members at the Action Center for Race and the Economy (ACRE) have pointed out, Chase has a particularly troubling history when it comes to racial discrimination. The bank has historically refused to provide proper branch services in immigrant and low-income neighborhoods of color in major cities. It has been the fossil fuel industry’s biggest backer. The trade associations that represent Chase and other big banks have donated tens of thousands of dollars to the campaigns of white supremacist Congressional candidates.

Private-sector partnerships might save the USPS some money. They might not. But revenue generation is not the primary point of postal banking.  The point is the people. Wall Street has consistently opposed the return of postal banking since its destruction in the 1960s. Chase and other nefarious actors are attempting to prevent competition before it even forms. The 2020 Democratic Party Platform and Biden-Sanders Unity Task Force recommendations both call for postal banking. But they also call on policymakers to separate retail banking institutions from more risky investments and protect consumers from high rates, onerous fees, inequitable credit reporting, and other harms. Allowing a multinational megabank like Chase to hawk its own products within public infrastructure only undermines these goals.