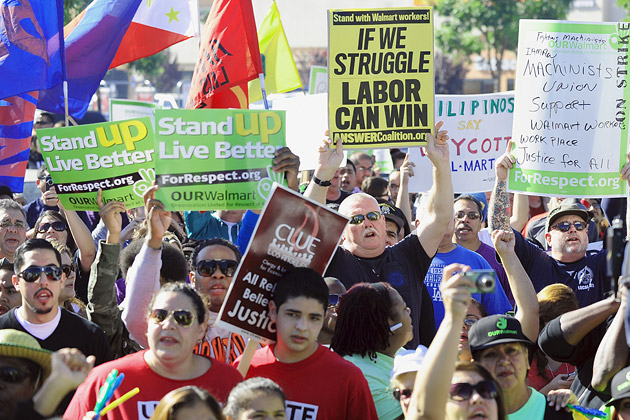 Earlier this year, Janet Sparks was called in to meet her bosses at the Walmart in Baker, La., where she works as a non-salaried supervisor in the customer service department.

Sparks, 53, had approached the managers earlier to complain about the treatment of some of her co-workers. Now, her bosses accused her of “creating a hostile work environment,” Sparks recalled. “They were not going to allow this.”

But Sparks had already become involved with a nascent labor movement seeking to organize people inside the world’s largest retailer, and she was cognizant that she had rights. She presented her managers with a government document that laid out the rights of non-union workers to organize. By the end of the meeting, she said, the bosses had agreed not to discipline her or her co-workers.

“Before I joined the movement, I knew I had rights, but I didn’t know where to look for them,” she said. “We’re standing together as a group. I’m not alone anymore.”

This week, OUR Walmart, the union-backed association that Sparks joined, has been holding demonstrations in Bentonville, Ark. — Walmart’s headquarters — leading up to the annual shareholders’ meeting on Friday. Sparks’ experience offers testament to the tenuous and hard-to-measure, yet nonetheless palpable, changes the movement says it has already achieved since first gaining consumer attention last year.

“On the store level, people have won all kinds of victories,” said Dan Schlademan, a campaign director for the United Food and Commercial Workers, one of the main union backers of the movement, rattling off a list: “getting writeups taken away, terminations undone, wages fixed.”

More broadly, he added, the movement is educating people that they have rights.

“There’s a transformation happening among Walmart workers that’s at the foundation of this,” Schlademan said. “Walmart will never be the same again.”

Walmart asserts that it has always respected its employees and sincerely addressed their complaints, making the labor movement both marginal and unnecessary.

“We listen to our associates every day,” said Walmart spokesman Kory Lundberg. “Every associate in every store has an open door to talk to management in the store, in the region, in the company. If they have a concern, we want to know about it.”

The OUR Walmart campaign is at the heart of a broader union-driven effort to improve the lot of those who work for low wages in the fast-food, retail, and warehouse industries, in part by educating them about their rights under state and federal labor laws.

Many of Walmart’s 1.5 million workers earn close to minimum wage, placing them among the fast-growing cohort of American workers who earn so little that they officially live in poverty. Those who earn more often lack the hours they need to make ends meet.

“Working for Walmart has become too costly,” said Sparks, who said she relies on credit cards to eat and buy gas.

Like many workers, Sparks traces the roots of the movement to a shift that took place around 2005, when Susan Chambers, then Walmart’s executive vice president for benefits, sent a highly publicized memo encouraging the company to save money by hiring more part-time workers, reducing workers’ hours and cutting spending on health care and other benefits.

Chambers has since been promoted to the head of the Global People Division at Walmart, where she’s in charge of managing the retailer’s gigantic workforce. The company moved forward with the new policies in 2006, transitioning to a cheaper workforce by capping wages, utilizing more part-time workers and scheduling more employees on nights and weekends.

Around the same time, the UFCW, a 34-year-old union that previously fought a failed battle on behalf of Walmart meat-cutters, began looking for new ways to respond to the thousands of letters, faxes, emails and phone calls pouring in from disgruntled Walmart workers around the country.

Three years ago, Schlademan began meeting with workers from Laurel, Md., to plot action, eventually settling on a novel and untested strategy.

Since then, the group has gathered workers from around the country to share stories about their experiences, educated workers about their rights, and organized a series of strikes and protests, including last year’s widely publicized demonstration on Black Friday. They’ve also argued that the retailer’s disappointing sales in recent years can be attributed to its decision to cut labor costs.

Other experts say the movement may also be altering the way consumers perceive Walmart, which could ultimately affect the retailer’s bottom line.

According to data from YouGov BrandIndex, which measures brand perception among the public, the controversies over the past couple years — the Mexico bribery scandal, the deadly fire at the Tazreen factory in Bangladesh and the Black Friday strikes — have affected how consumers think of Walmart.

“When a brand is in the news because people are striking, it’s generally not a good thing,” said Ted Marzilli, CEO and Global Manager of YouGov BrandIndex. “Typically that will register for consumers.”

However, this doesn’t necessarily mean that the specific incidents will influence consumers’ decisions on whether or not to shop at that particular store, said Marzilli. Consumers are generally forgiving of brands, unless companies make repeated mistakes or react to bad news in a superficial or dishonest way, he added.

Burt Flickinger, the managing director of Strategic Resource Group, a retail and consumer goods consulting firm, said Walmart refuses to concede that the strikes are causing palpable tremors among consumers.

“There is a consumer backlash, and Walmart won’t admit it,” said Flickinger. “Shoppers know their history, and they’ve got a conscience for their workers.”

The problem goes beyond reputation, according to Flickinger. Walmart’s policies regarding its workers are hurting the once-invincible retail giant’s business, he said, pointing to relatively stagnant sales numbers at Walmart over the past three years.

According to a report from The New York Times, Walmart has cut its staffing, on average, from over 338 workers per store to 281 workers per store since 2007. Several reports from Bloomberg News documented the impact of the cuts, citing Walmart customers and store workers who complained about disorganization in stores, leading to longer lines at cash registers, lack of adequate customer service and empty shelves throughout stores.

Walmart challenges those portrayals, which Lundberg dubbed as “mistruth.”

According to Lundberg, Walmart has not cut the total number of hours worked in its stores. By having less workers, it allows the existing associates to work more hours, Lundberg said. This is what Walmart associates wanted, so the company moved forward and made the appropriate changes, he said.

“We’re still staffing those hours,” said Lundberg. “We’re just staffing them with fewer people because that’s what they’ve asked for.”

He said Walmart has brought about initiatives to provide its workers with the additional hours they’ve demanded, such as a pilot program that allows workers to request vacant shifts in other sections of their stores. Walmart plans to roll out the program across the country by the end of October.

According to Schlademan, however, the program was only introduced after workers at a Maryland store successfully pressured their manager to introduce those practices. “There were petitions and demonstrations and delegations to the manager,” he said.

Despite its various struggles in recent years, Walmart continues to reap big profits, which it will celebrate throughout weekend, staging an elaborate series of concerts and parties for thousands of shareholders and Walmart workers from around the world.

Sparks said she’s looking forward to the opportunity to talk to those workers about the movement’s accomplishments.

“Changes come slowly and little by little,” she said. “But we’re picking up steam and growing in size. That’s what I’m seeing at my store, and eventually all of Walmart will be either part of the avalanche or engulfed by it.”