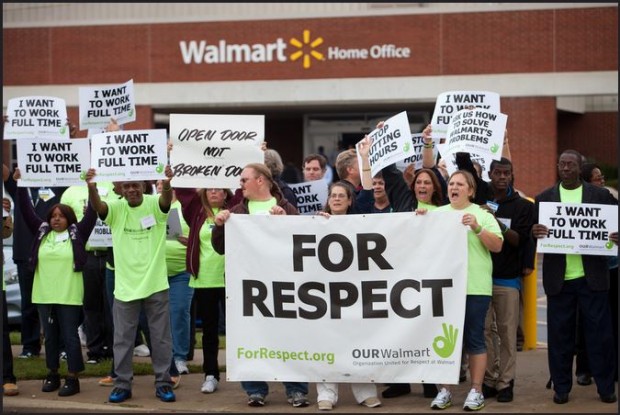 Our Walmart urges action, you can do this today or tomorrow.

Walmart workers are on strike!
Call your local Walmart and tell the manager that you support the strikers!

Make no mistake; Walmart is paying attention this Black Friday. Calling the company will show them that the public supports workers as they stand against Walmart denying them their right to speak out for $15/hr and full time.

When you call, ask to speak with a manager. Here is sample language for your call:

“I’m calling to say that I support the Walmart workers striking around the country today. Walmart needs to stop threatening and intimidating workers who speak out for better pay and respect at work.”

Black Friday is best known as the day when big-box retailers rake in money, but it has also become a time for some of their employees to demand a share of the proceeds. At Walmart, this year’s Black Friday protests will be the widest-reaching ever, organizers say, with pickets and strikes planned at 1600 stores in 49 states to remind shoppers that the people serving them often can’t afford to feed themselves.

“I have to depend on the government mostly,” says Fatmata Jabbie, a 21-year-old single mother of two who earns $8.40 an hour working at a Walmart in Alexandria, Virginia. She makes ends meet with food stamps, subsidized housing, and Medicaid. “Walmart should pay us $15 an hour and let us work full-time hours,” she says. “That would change our lives. That would change our whole path. I wouldn’t be dependent on government too much. I could buy clothes for my kids to wear.”

The nation’s largest employer, Walmart employs 1.4 million people, or 10 percent of all retail workers, and pulls in $16 billion in annual profits. Its largest stockholders—Christy, Jim, Alice, and S. Robson Walton—are the nation’s wealthiest family,collectively worth $145 billion. Yet the company is notorious for paying poverty wages and using part-time schedules to avoid offering workers benefits. Last year, a report commissioned by Congressional Democrats found that each Walmart store  costs taxpayers between 900,000 and $1.75 million per year because so many employees are forced to turn to government aid.

In its first full holiday season with stores open in the nation’s capital, Wal-Mart drew three straight days of labor protests that culminated Friday with hundreds chanting ‘shut it down’ outside a new store in the view of the U.S. Capitol.

The protests over wages and benefits were part of a wave of labor actions that organizers said targeted 1,600 stores nationwide at the traditional kick-off to the Christmas shopping season.

In Sacramento, where 35 workers and protesters were cited for civil disobedience, the Sacramento Bee reports:

Sacramento resident Shannon Henderson, 29, works at a Walmart on Florin Road as a customer service associate, the term Walmart calls its employees. She said she earns $9.60 an hour at the 30-hour-a-week position and relies on public assistance to fill the gap.

Henderson said she attended the protest to help send a message to the retailer and other U.S. corporations.

“I feel like Walmart sets the stands for other corporations. What Walmart does, the others follow suit. With more money and hours, people can support families,” Henderson said. “You shouldn’t have to rely on assistance when you work for the largest company in the world.”

Some Walmart shoppers looking for door-buster deals on Back Friday were met by protesters speaking out against the retailer’s treatment of workers.

In what is being touted as the biggest organized protest of Walmart in the company’s history, more than 1,600 demonstrations were organized by the Organization United for Respect at Walmart (OUR Walmart).

Supporters on Friday called on Walmart and its owners to raise the pay to a minimum of $15 an hour while providing more consistent full-time work.

Dirk Rasmussen had Friday off and could have slept in if he wanted to. Instead, the Maryland resident and Teamster rose early and drove to downtown Washington, eager to join a post-Thanksgiving protest against Walmart.

“Our local [union] president encouraged us to take part,” said Rasmussen, 58, who works in a lumber and building-supply warehouse. “I raised eight children on a Teamsters benefit package and Teamsters wage. I’m a firm believer in collective bargaining, and I’m very concerned about the security of this next generation.”

Black Friday may be most famous for doorbuster shopping deals, but among progressives it’s becoming a regular holiday for labor demonstrations. Friday marked the third consecutive year of scattered but highly visible protests against Walmart. Demonstrators, along with an unknown number of Walmart strikers, are calling for better pay and scheduling practices from the world’s largest retailer.

Corpus Christi AFT supports our brothers and sisters in the battle for #15andFullTime! #WalmartStrikers pic.twitter.com/7bjha1fEBZ

These amazing people brought rice and beans to feed the #WalmartStrikers in #NOLA! @Show_Me15 pic.twitter.com/XlDxPm3kkf

RT @other98: #WalmartStrikers outside DC @Walmart calling for $15/hr and FT hours pic.twitter.com/zGTu8vB5cX

Thanks for your bravery! RT @ForRespect: #walmartstrikers in Sacramento take street and refuse to leave pic.twitter.com/4ETChCGsC8

So much support for #WalmartStrikers today! Here’s some from Sacramento pic.twitter.com/TE0Y6Ue39z

Woo! So many supporters & #WalmartStrikers today! Here’s a great shot from this morning in DC. Workers want RESPECT! pic.twitter.com/7cp5Bn5YSu

Even if you don’t shop there, you still give #Walmart money every year if you pay taxes. #WalmartStrikers pic.twitter.com/mBXrEpgG4a

1 of 1,600 actions today at Walmart wrapping up in DC, chanting “we`ll be back” and leaving our mark #WalmartStrikers pic.twitter.com/hI8D5LRWdh

“I am here because I am afraid of the retaliation I will receive from Walmart.” #WalmartStrikers pic.twitter.com/ELGXgErWQz

So cool seeing how widespread support 4 #WalmartStrikers is! Here’s a great shot from an action in Klamath Falls, OR pic.twitter.com/zkE6NkegwQ

#WalmartStrikers leave a little something something outside Alice Walton’s Park Avenue condo: pic.twitter.com/oBHHMxkfFK via @other98.