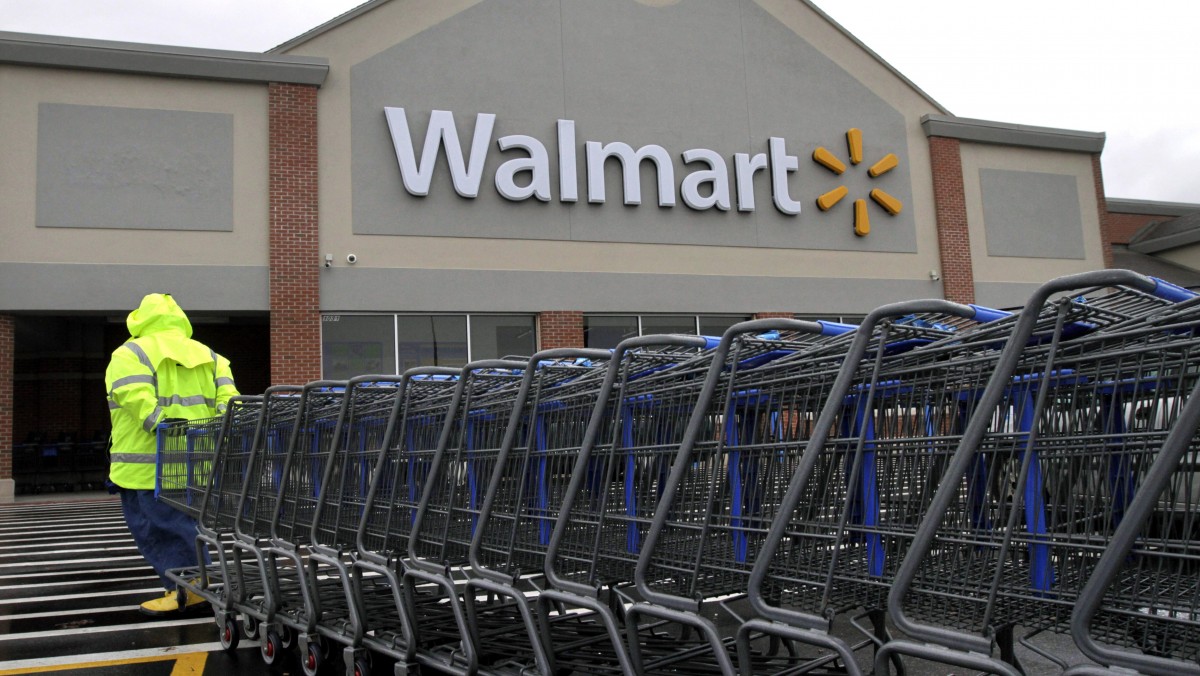 Above Photo: In this Tuesday, Nov. 13, 2012 photo a worker pulls a line of shopping carts toward a Walmart store in North Kingstown, R.I. (AP Photo/Steven Senne)

Walmart’s move is just the latest in the rolling-out of surveillance technology across workplaces in the United States, which merges the use of technology for generating metrics with spying technology that further creeps into the lives of already hard-pressed, cash-strapped workers.

Big-box retailing behemoth Walmart, which employs one of the United States’ largest workforces, has never been known for being a friendly corporation to employees. With its anti-worker environment, hard-nosed opposition to unions, and reputation for destroying small business in markets it grows to dominate, the company has become synonymous with the heartless, calculating reputation of corporate culture and its total disregard for people’s dignity.

Faced with stiff competition from “everything store” and online retailer Amazon, however, the company is being driven to maintain its profit margins while simultaneously keeping close tabs on workers who could possibly organize. Enter its new audio sensor technology, known as “listening to the frontend.”

According to BuzzFeed, a patent has just been awarded to the retailer that will be capable of tracking audio to detect how many bags are being used and the “efficiency” of bagging items; how long lines are; and – most ominously – the content of conversations between customers and employees or between workers themselves.

While still, for the time being, only a patent, the move is just the latest in the rolling-out of surveillance technology across workplaces in the United States, which merges the use of technology for generating metrics with spying technology that further creeps into the lives of already hard-pressed, cash-strapped workers.

“Walmart’s patented surveillance system would use a series of sensors in the cashier area to collect audio data — everything from “beeps” to “rustling noises” to “conversations between guests and an employee stationed at the terminal.””

In call centers, for example. employees’ interaction with customers are normally reviewed and rated by management or consultants, while every minute is accounted for through systems that crunch out analytics tracking speech patterns and call length.

In the same manner, “listening to the frontend” could be used to automatically evaluate the performance of checkstand workers. As BuzzFeed writes:

Earlier this year, reports emerged that Amazon was also awarded a pair of patents for a system that allows management overseers to track workers’ activities through the use of bracelets that emit ultrasonic pulses or radio transmissions to determine whether a worker is performing proper tasks in relation to warehouse inventory.

Walmart has, predictably, shied away from discussing the surveillance potential of the sensors but has defended its use of the technology as a means to improve “guest satisfaction.” In a statement sent to BuzzFeed, the company said:

We’re always thinking about new concepts and ways that will help us further enhance how we serve customers, but we don’t have any further details to share on these patents at this time.”

There’s sometimes a misconception that the consent of employees is required for surveillance, but frankly, as long as the employer can make an argument for why the surveillance is necessary for a business purpose as opposed to a discriminatory purpose, there’s no law that says consent is required.”

Workers across industries are often faced with the introduction of labor-saving innovations meant to maximize profits by squeezing workers harder, especially if workers are demanding higher wages.

The sound recording is helpful for determining if the line is too long, let’s automatically open a new cashier. But then there’s potential for mission creep where it’s more like, ‘as a cashier you’re too friendly, you’re talking too much, and therefore not moving people along, so let’s penalize you.’ Even though the technology is presented as interested in one thing, the fact that it has the potential for both things to be captured is of concern. There’s a lot of potential for misuse.”

Yet, without any sort of union contract, Walmart workers lack recourse and are unable to address the system or demand to be given notice or granted a requirement for consent.

And the company’s labor-saving measures could well backfire and adversely impact the psychology of Walmart’s workforce, as Ajunwa noted, leading “to this opposition feeling, where employees view the employer not as benevolent, but as dictators. And it can impact that attitude toward the higher-up and can lead to resistance.”