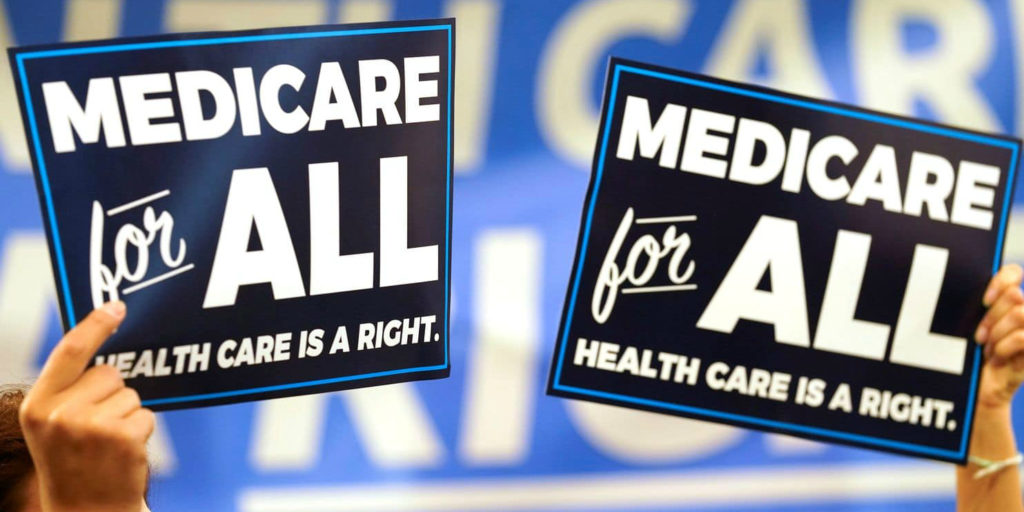 Healthcare consistently ranks as one of the top issues for Democratic voters, so helping those voters understand Democratic presidential candidates’ positions on healthcare ought to be a key job for journalists. Right? A recent survey of those voters shows that they are woefully confused and misinformed, and a recent Washington Post story on the issue perfectly illustrated why that’s the case.

The Kaiser Family Foundation, a health policy think tank, polled people on their knowledge and opinions about Medicare for All and other healthcare reform ideas, and found all sorts of mistaken beliefs—most notably, that under Medicare for All, people would still pay deductibles, co-pays and premiums, and that they would be able to keep private insurance plans they currently have.

On the other hand, Democratic voters are clear in the Kaiser survey that they want to hear from the candidates about decreasing healthcare costs, increasing access, protecting the ACA and implementing Medicare for All.

The Post’s Amy Goldstein quoted a Democratic voter named Ron Jungling (whose wife happens to work as an insurance broker) who thinks Medicare for All won’t “keep costs down,” to illustrate the article’s contention that there is a “misalignment in candidates’ focus and, in some cases, their level of attention.”Reporting on the Kaiser survey among others, the Washington Post(6/21/19) framed the story as a “disconnect” between Democratic candidates with “bold ideas to achieve the party’s long-held dream of ushering in health coverage for every American” and “many voters [who] are not focused on such lofty goals. They want something simpler — to pay less for their own healthcare.”

There’s definitely a misalignment here, but it’s not the one the Post describes—it’s the one between the reality of Medicare for All and the distorted caricature of it that healthcare industry-friendly and right-wing groups are actively trying to promote. As Medicare for All supporters routinely point out, universal access means affordable access; the cost of care and the availability of care are intertwined. And even candidates who aren’t pushing for full Medicare for All are talking about both access and costs. But the Post tried to spin the story into a false competition between the two.

According to the Post‘s expert sources:

The debate is not going to be 2008 or ’16 over again. It’s going to be about the price of insulin, hospital charges and insurance premiums, with, “What are you going to do about them for me?”

Another source argued that “prescription drug prices” are a “hot issue” with voters that’s not being talked about enough, because candidates are “playing to the values of Democratic primary voters, who tend to lean further left than others in the party.”

They’re arguments that could only seem logical if you manage to overlook Bernie Sanders’ campaign—and those of the seven candidates who have signed on to his Medicare for All Act in the Senate or the companion bill in the House. Sanders, who has put Medicare for All front and center since the last election, has spokenout repeatedly on insulin prices. As previously noted (and as Sanders’ campaign frequently points out), hospital charges and insurance premiums would be eliminated under Medicare for All. The first link on his website’s “Issues” page is “Healthcare for All“; on that page, the second sentence is about unaffordable healthcare costs for those with insurance, and the four-paragraph page devotes an entire paragraph to prescription drug prices. If voters don’t hear candidates talking about these things—and if they’re completely confused about what Medicare for All even means—it’s because journalists aren’t doing their job in covering them.

In the Post article, for example, when Goldstein finally gets around to talking about Sanders, it’s only about overall costs:

When Sanders talks of Medicare for All, still near the core of his campaign’s rationale, he contends that a single-payer system would be more efficient and would lower the nation’s health-care spending. But reducing overall costs is not a priority with the public, recent polls show.

Medicare for All would almost certainly reduce most people’s healthcare costs, but it’s a complicated plan with lots of possible pathways to funding and implementation that make it irreducible to simple soundbites. That’s where journalism comes in; helping voters understand the options would be the way to ensure a healthy debate on the subject. Instead, reports like the Post‘s only perpetuate the misinformation, boosting the industry-friendly line that Democrats’ ideas are too “lofty” and “bold” for voters.