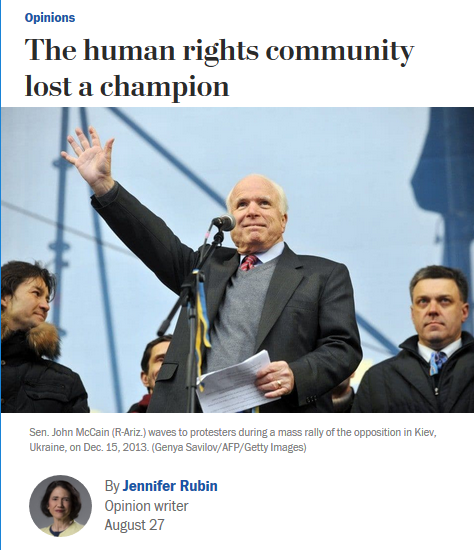 Rubin waxed poetic on the ostensible “lost champion” of human rights, who “model[ed] for others the behavior of a free society.” She declared, quite paradoxically, “With the possible exception of the US military…no group was more indebted to Sen. John McCain (R-Ariz.) than the human rights community.”

There was an, er, optical problem, however: For the header image on this column, the Washington Post used a photo of McCain speaking next to the notorious Ukrainian neo-Nazi leader Oleh Tyahnybok.

Tyahnybok, a longtime fascist, has called for a war on the so-called “Muscovite-Jewish mafia” (BBC, 12/26/12). The far-right leader has attacked the role of “Jews-Bolsheviks” in his country’s history, and claims that there is still today a cabal of “Jewish oligarchs who control Ukraine” (JTA, 3/25/09).

John McCain met with Tyahnybok and stood next to him as the senator gave a speech in Ukraine in late 2013, as Business Insider (12/16/13) reported at the time. The Washington Post indicated in the caption on its header image that McCain was “wav[ing] to protesters during a mass rally of the opposition in Kiev, Ukraine, on December 15, 2013.” But it failed to identify the man standing next to the Arizona senator—or his extremist politics, which are the antithesis of human rights.

McCain was in the Eastern European nation—along with Democratic Senator Chris Murphy — to cheer on the ongoing right-wing protest movement. In February 2014, this movement was successful: Ukraine’s democratically elected, pro-Russian government was overthrown in a coup, in which fascist forces played a significant role (FAIR.org, 3/7/14).

This about sums it up: @JRubinBlogger‘s @washingtonpost paean to “human rights champion” John McCain literally pictures him alongside Oleh Tyahnybok, leader of the anti-Semitic Ukrainian ultra-nationalist, neo-Nazi Svoboda party. pic.twitter.com/6O8OKr247w

Tyahnybok is far from a minor player in Ukraine. And since the US-backed coup, he has become increasingly influential.

Tyahnybok has been the leader of the fascist, ultra-nationalist Ukrainian political party Svoboda since its founding in 2004. Svoboda has its origins in the explicitly neo-Nazi Social-National Party of Ukraine, which proclaimed, “We are the last hope of the white race, of humankind as such.”

Tyahnybok represented this neo-Nazi party in Ukraine’s parliament, the Verkhovna Rada. While in the Rada, the far-right extremist sought to honor Ukrainian fascists who had collaborated with Nazi Germany during World War II. He also campaigned to outlaw Communism in Ukraine (which the country’s right-wing post-coup government has since done).

In 2004, the Social-National Party of Ukraine rebranded. In an attempt to moderate its image, it abandoned the neo-Nazi Wolfsangel symbol it had long used, and adopted a pro–European Union stance.

Tyahnybok became the leader of the newly created Svoboda. But that same year, he was also expelled from the president’s electoral alliance for issuing a call to arms against the so-called “Muscovite-Jewish mafia.” In 2005, he went on to demand that the government cease the supposed “criminal activities” of “organized Jewry.”

This is all in reference to an extreme neoconservative hawk who cheer-led the illegal US invasion of Iraq, proudly referred to the Vietnamese people with racial slurs, and lobbied for military intervention in well over a dozen countries. He never apologized for the mass killing of Southeast Asian civilians he took part in during the Vietnam War, instead arguing that the United States should have bombed more intensely and indiscriminately (Salon, 7/4/08).

This is a map from 2013 of the many countries where unrepentant warmonger John McCain had called for US military intervention:
– Syria
– Iraq
– Afghanistan
– Libya
– Kosovo
– Nigeria
– Bosnia
– North Korea
– Iran
– Russia
– Sudan
– Mali
– China https://t.co/TWcX2RSNYu pic.twitter.com/RsCXLDrV5Y

And it was not just corporate media. Leading human rights organizations such as Human Rights Watch and Human Rights First likewise praised the conservative warmonger — a testament to the fact that the “human rights” discourse and Beltway community are largely a fig leaf for advancing US foreign policy interests.

“Senator McCain…was never shy about his commitment to basic rights & frequently confronted global leaders directly about their repression and abuse.”

Official @hrw statement on the passing of Senator McCain: https://t.co/8M15VIxA3N

In fact, the hard-line conservative lawmaker’s ties to fascists go even deeper, beyond the Washington Post‘s ill-chosen photo.

In 2017, John McCain welcomed another Ukrainian neo-Nazi into his office, as I reported with Max Blumenthal at AlterNet (6/23/17).

McCain tweeted out a photo of his meeting with Andriy Parubiy, the founder of the Social-National Party of Ukraine, who today serves as the chair of Ukraine’s parliament.

Despite his explicitly fascist politics, Parubiy enjoys support from politicians not only in the United States, but also in the United Kingdom.

But that’s not all. Journalist Chip Berlet detailed in the Huffington Post in 2008how John McCain served on the advisory board of the United States Council for World Freedom, the US affiliate of the pro-fascist group the World Anti-Communist League.

McCain’s undying support for far-right Salafi-jihadist rebels in Syria likewise followed this pattern. Just a few months before speaking in Ukraine, McCain traveled to Syria, where he met with a rebel leader who helped kidnap a dozen Lebanese Shia pilgrims.

That so many corporate media outlets can uniformly whitewash a right-wing war hawk with links to fascists as a “human rights champion” and “defender of democracy” is a testament to just how beholden corporate media are to US government interests.

One can draw the same conclusion when a major newspaper illustrates a eulogy to a human rights “champion” with a photo of him giving a speech alongside a Nazi.