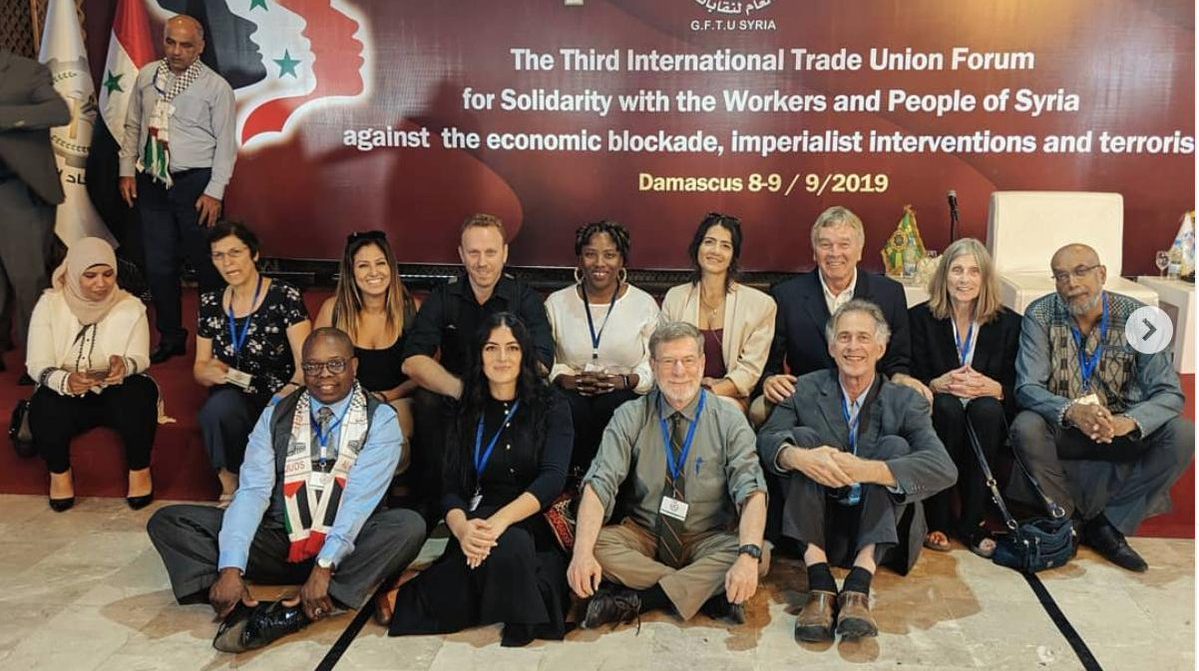 War And Militarism Are Class Issues

Third International Trade Union Forum in Solidarity with Workers and People to Break the Economic Sanctions and in Rejection of Imperialist Intervention, held on September 7 through 9, in Damascus, Syria: Presentation by Ajamu Baraka

Thank you, and I bring you greetings from the struggling working-class peoples of the United States, but particularly from the anti-imperialist and revolutionary Black working class and our still imprisoned comrades from the Black Liberation Movement, many of whom have been imprisoned for over 40 years representing the longest-held political prisoners on the planet!

My Name is Ajamu Baraka, and I am here in my capacities as a member of the leadership bodies of the U.S. Peace Council, The United National Anti-war Coalition and especially the Black Alliance for Peace (BAP), a multi-tendency, Black Internationalist, anti-imperialist, working class-oriented formation that is an integral part of the historic struggle for Black and working-class liberation in the United States.

As a Black working-class oriented alliance residing in the center of empire and committed to peace and abolishing war, repression and imperialism, we are quite clear about how we see the world and our responsibilities.

We say that there can be no working-class justice, no working-class rights in a world where powerful elite social forces are prepared and are using extreme violence in the form of political and economic destabilization and war.

We are clear that war is a class issue. That it is always the rural and urban working classes that are required to fight the wars against other working classes and oppressed peoples and nations.

That is why we in BAP say clearly and without equivocation “Not one drop of blood from the poor and working-class to defend the capitalist dictatorship in the U.S. and oppressor classes and peoples’ world-wide.”

Let me share very briefly how the interests of the rulers’ clash with that of the working class in the U.S.

In the U.S.  Neoliberalism, state austerity and theft of public resources has had a devastating impact on workers.

It has been estimated that the U.S. state has spent 6 trillion dollars on U.S. wars over the last 18 years. The military budget for next two years will amount to over 730 billion a year!  The state has already committed 1.7 trillion over next ten years to upgrade U.S. nuclear arsenal.

What impact has that had on workers in the U.S. who make up majority of the population?

The UN’s special rapporteur on extreme poverty and human rights points out that : the US is one of the world’s wealthiest countries. It spends more on national defense than China, Russia, The United Kingdom, France, Japan, Saudi Arabia and India combined.

* US infant mortality rates in 2013 were the highest in the developed world.

* Americans can expect to live shorter and sicker lives, compared to people living in any other rich democracy, and the “health gap” between the US and its peer countries continues to grow.

* US inequality levels are far higher than those in most European countries.

* The youth poverty rate in the United States is the highest across the OECD with one-quarter of youth living in poverty compared to less than 14% across the OECD.

The theft of public resources for the military and militarism domestically and abroad represent a one-sided class war waged on the working class in the U.S. The 6 trillion dollars spent on U.S. wars since 2003 are resources that could have been directed to address the increasingly desperate plight of workers and poor people in the U.S.

Today, as a result of the neoliberal policies supported by both parties over the last forty years and the diversion of the people’s resources into war and militarism:

* 34 million workers are still without health insurance (Austerity and militarism both kill, AB).

* More than half of those over 55 years old have no retirement funds other than Social Security, which means that these seniors retire straight into poverty.

War and militarism are class issues that impact workers in various ways depending on the national context. In Syria, workers and the people have suffered enormously as result of the criminal aggressions by a collection of rogue states with no regard for human life, human rights or established morality.

For workers and the people of Syria, women workers in a Bangladesh garment factory, for African workers extracting precious materials for the world market in the Democratic Republic of the Congo, teacher unions in the U.S., sanitation workers in China, and for the thousands of workers and campesinos in Central America displaced by U.S. and European capital and repressive governments, there can be no workers’ rights without peace and social justice.

This requires a recognition that reciprocal solidarity, anti-imperialism, anti-racism, gender equality and opposition to patriarchy, and respect and support for the sovereignty of nations and peoples’ must be guiding principles of worker-centered internationalism.

BAP stands in fraternal solidarity with the people and working class of Syria and the world in the desire for a world in which the people can experience peace, people(s)-centered human rights and a sustainable future. We are confident that this gathering will move us closer toward realizing this common vision.

Ajamu Baraka is the national organizer of the Black Alliance for Peace and was the 2016 candidate for vice president on the Green Party ticket. Baraka serves on the Executive Committee of the U.S. Peace Council and leadership body of the United National Anti-War Coalition (UNAC). He is an editor and contributing columnist for the Black Agenda Report and contributing columnist for Counterpunch. He was recently awarded the Serena Shirm award for uncompromised integrity in journalism.