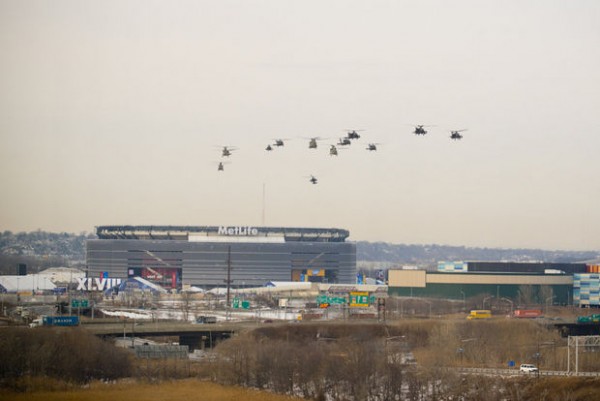 Staff note: It permeates all areas of our lives, this war culture. It has become so endemic that most Americans don’t notice it. This article from the Department of Defense describes the value of using military assets for the Superbowl because of opportunities for recruitment and to “connect our military to America.” How about some peace culture instead? It’s better for the planet and all living beings.

The Armed Forces Color Guard featuring two percussionists, a local military chorus accompanying National Anthem singer Renée Fleming, the renowned soprano, a U.S. Army rotary-wing aircraft flyover, and deployed service member greetings, will appear during the game, which is expected to be watched by more than 100 million people around the world.

“We’re … providing military assets to the Super Bowl as part of the department’s community relations efforts,” Warren said. “It has potential recruiting benefits and it helps connect our military to America.”

Security for the open-air, 82,566-seat stadium will be robust, Warren noted.

The North American Aerospace Defense Command and National Guard personnel have been on duty since earlier this week providing security and logistical assistance, Warren said.

Warren also reported that NORAD, at the request of the Department of Homeland Security, will conduct Operation Noble Eagle air patrols in the airspace around MetLife stadium to enforce the Federal Aviation Administration’s temporary flight restrictions there.

And, approximately 400 National Guard personnel will be on state active duty or on standby to assist state and federal officials with security augmentation and civil support teams, Warren said.

Kickoff is set for 6:30 p.m. EST and the game will be broadcast on FOX.