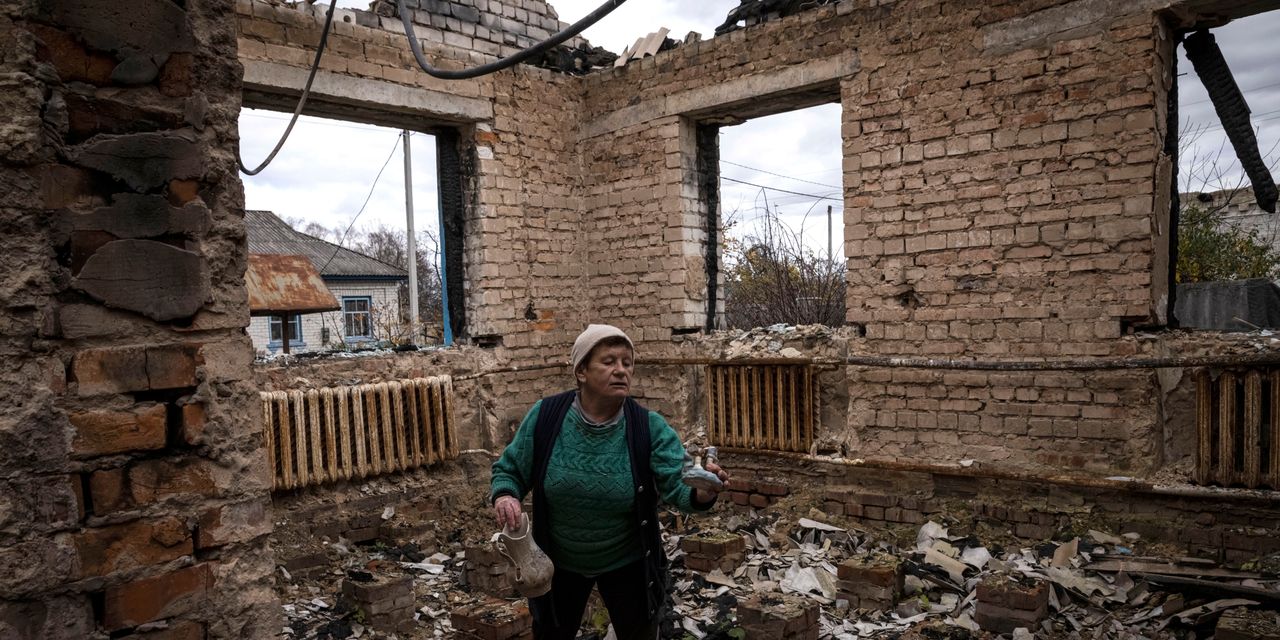 War In Ukraine – US Creeping Towards Ever Deeper Involvement

Above Photo: A woman walking through her destroyed home in a village near Chernihiv, Ukraine. Ed Ram / Getty Images.

The number of Republican voters who are against the war in Ukraine has steadily increased. In March only 6% said that the U.S. is doing ‘too much’ for Ukraine. That number is now 48%. The Republicans in Congress have been pressing the Biden administration to better safeguard the enormous amount of weapon and money it is sending to Kiev:

Following concerns in Congress and accusations by Russia about weapons smuggling, the Biden administration released its blueprint on Thursday for ensuring that the $17 billion in arms it has so far sent to Ukraine were making it to the battlefield — and not the black market.

On October 27, nine months after the U.S. sponsored war started and after $17 billions in weapons and ammo have been sent, the U.S. State department published a:

The plan will be a whole-of-government effort implemented broadly across three phases:  now through Fiscal Year (FY) 2023, FY 2024, and beyond FY 2024. It will focus on three lines of effort:

End-use monitoring (EUM) measures, as traditionally conducted by State, DoD, and Commerce, while different in their scopes and methodologies, are generally designed to mitigate the risk of illicit diversion in peacetime or low-intensity conflict environments, as they normally rely on in-country presence of U.S. government personnel. Conducting EUM in an active war zone such as Ukraine requires different approaches, as the conflict makes it impractical to request the return of equipment from the front lines to depots or other locations where U.S. government personnel can inspect them in a safer environment.

So the U.S. can not really account for the weapons it delivers to Ukraine, says the State Department, but it can teach the Ukrainians how to count and guard them.

Good luck with that.

Three days later the Pentagon claimed that it had started to do what the State Department had called ‘impractical’.

A small number of U.S. military forces inside Ukraine have recently begun doing onsite inspections to ensure that Ukrainian troops are properly accounting for the Western-provided weapons they receive, a senior U.S. defense official told Pentagon reporters Monday.The official, who spoke on condition of anonymity to provide a military update, would not say where the inspections are taking place or how close to the battlefronts the U.S. troops are getting. The official said U.S. personnel can’t do inspections “close to the front lines,” but said they are going where security conditions allow.

The official said there have been several inspections, and they are being done by the U.S. Defense attache and the U.S. Office of Defense Cooperation team that is in Kyiv. So far, the official said, Ukrainian officials have been transparent about the weapons’ distribution and are supporting the inspections.

But a day later we are told that in reality nearly zero inspections get done.

U.S. races to track American arms in heat of Ukraine war – WaPo / MSN
U.S. monitors have conducted in-person inspections for only about 10 percent of the 22,000 U.S.-provided weapons sent to Ukraine that require special oversight.

Since late February’s invasion, which prompted the closing of the U.S. Embassy in Kyiv for several months, U.S. officials have been able to conduct just two in-person inspections of items requiring enhanced oversight at weapons depots where U.S. arms had been brought in from Poland.“The conflict creates an imperfect condition for us to have to adjust quickly,” a senior State Department official said. “We want to put some of those resources to working with our allies and partners to mitigate risk however, wherever we can.”

The scramble to adapt oversight rules designed for peacetime has taken on greater importance as the volume of American assistance reaches dizzying levels and congressional scrutiny intensifies.
…
The Biden administration is trying to highlight a new oversight push to account for any potential leakage from the large flow of U.S. weapons — particularly as congressional Republicans voice growing concerns about aid accountability and the overall volume of assistance to Ukraine.

U.S. personnel based at the embassy in Kyiv have for months inspected weapons deliveries at unspecified locations in Ukraine, the Pentagon said Thursday, at sites described as “not near the front lines.” The inspections were standard accountability measures, and there is no evidence of widespread weapons diversion, Air Force Brig. Gen. Pat Ryder, the Pentagon spokesman, said in a statement. It is unclear whether the United States has detailed its activity to Russia, which has said it would view any U.S. military activity within Ukraine as a provocation.

What is it? Inspections have been done ‘for months’ but only ‘two in-person inspections’ were made?

Most likely this is all hogwash. The U.S. is obviously not really interested in monitoring where the weapons it delivers end up. But it now admits that it has boots on the ground in Ukraine though allegedly for a good purpose. But the soldiers sent there to count weapons, which they really don’t do, are most likely just a cover for the real forces the U.S. is deploying there:

Very innocuously, the Biden Administration has ‘sensitised’ the world opinion that American troops are indeed present on Ukrainian soil in Russia’s immediate neighbourhood. Washington made a “soft landing” with an unnamed senior Pentagon official making the disclosure to the Associated Press and the Washington Post.The official gave an ingenious explanation that the US troops “have recently begun doing onsite inspections to ensure” that Ukraine is “properly accounting” for the Western weapons it received. He claimed that this was part of a broader US campaign, announced last week by the State Department, “meant to make sure that weapons provided to Ukraine don’t end up in the hands of Russian troops, their proxies or other extremist groups.”

In effect, though, President Biden is eating his own word not to have ‘boots on the ground’ in Ukraine under any circumstances.

The U.S. is increasing the temperature that will – in the end – boil the proverbial frog. The frog here being the Russian leadership as well as the U.S. public. It has increased, slowly slowly, the quality and number of weapon systems it delivers to Ukraine. It had also silently pushed more and more of its own soldiers into the country. It now started to do so openly.

The Biden administration is creeping towards a full fledged war with Russia:

Plainly put, wittingly or unwittingly, the US is going up the escalation ladder. So far, the US intervention involved deployment of military advisors to the Ukrainian military command, supply of intelligence in real time, planning and execution of operations against Russian forces and allowing American mercenaries to do the fighting, apart from steady supply of tens of billions of dollars worth weaponry.The qualitative difference now is that the proxy war may turn into a hot war between the NATO and Russia. The Russian Defence Minister Sergey Shoigu said today at a joint board meeting of the Russian and Belarusian defence ministries that the number of NATO forces in Eastern and Central Europe had risen by two and a half times since February and might increase further in the near future.

Colonel Douglas Macgregor, who still has his connections inside the Pentagon, is warning of this creep towards war :

Today, the Biden White House appears to be considering the use of a multinational force aimed at Russia. The NATO alliance is unable to reach a unanimous decision to intervene militarily in support of Ukraine in its war with Russia. But as signaled recently by David Petraeus, the president and his generals are evaluating their own “coalition of the willing.” The coalition would allegedly consist of primarily, but not exclusively, Polish and Romanian forces, with the U.S. Army at its core, for employment in Ukraine.
…
Jens Stoltenberg, the Secretary General of NATO insists that Ukraine’s failure to prevail in its war with Russia would be interpreted as a defeat for NATO. Would heavy losses inflicted on U.S. ground forces in a confrontation with Russian military power not also signal Washington’s defeat? How rapidly could U.S. and allied forces replace their losses? Would severe U.S. losses raise the specter of a U.S. nuclear response? When does support for Ukraine put NATO’s security and survival at risk?
…
In his fight with Russia, Bonaparte not only badly misjudged his opponent, but he also grossly misjudged his allies. President Biden and his generals should not make the same mistakes in Ukraine.

As the U.S. involves itself more and more into the war so do the Brits. They plotted how to blow up the Kerch bridge, helped with the destruction of the Nord Stream pipelines and have been constructing a secret terror army in Ukraine. How many of its SAS troops have been deployed in Ukraine is not publicly known. But we can be sure that some are, likely for ‘training’ purpose.

This creeping towards more involvement can easily lead to a catastrophic war between superpowers. The best Russia can do to prevent that is to speed up its operations in Ukraine. A fast and decisive defeat of Ukraine’s army is the only way to prevent a deeper U.S. involvement.