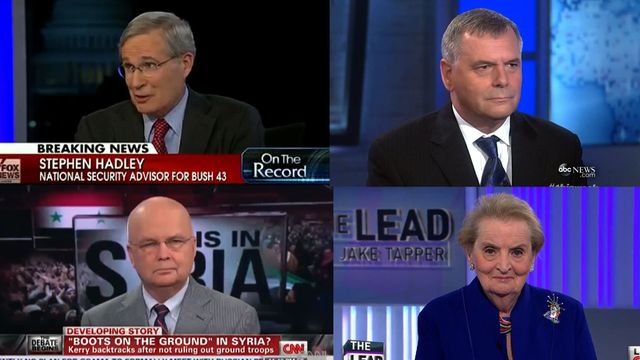 Want to know what corporate media look like when they’re reporting for duty?

On the most recent CBS‘sFace the Nation(9/28/14), host Bob Schieffer previewed the guests who would be appearing on the show:

We will get the latest on the mission and what it entails from Deputy National Security Adviser Anthony Blinken, retired General Carter Ham, former Pentagon official Michele Flournoy and former Deputy Director of the CIA Mike Morell.

So that’s a current government official, a retired general, and retired Pentagon and CIA officials. Now that‘s a diverse line-up.

On ABC‘s This Week (9/28/14), Martha Raddatz was reporting from Bahrain to give viewers a close look at a US aircraft carrier. The segment couldn’t have appeared more like an infomercial for the US Navy:

These sailors understand their jobs are critical. We watched these men and women assemble bombs, putting together a 500-pound precision-guided weapon capable of leveling a building, and above them, the bombs were loaded onto aircraft bound for the war zone.

Raddatz also told viewers that “the deck of an aircraft carrier is an incredibly dynamic place,” and that

throughout this deployment there has not been a single serious mishap, and well over 250 missiles and bombs have been dropped on Iraq and Syria.

RADDATZ: And we are now back on land, and joining us now is Vice Admiral John Miller, who is the commander of US naval forces for Central Command and the commander of Fifth Fleet here in Bahrain. Admiral Miller, let’s start with what you really have accomplished with those air strikes.

When government officials launch an ill-defined war based on dubious claims about a threat to the “homeland,” you might hope that would be the time for reporters to aggressively examine and question government claims. But corporate media see things differently; war time is when TV screens are full of former generals and hawkish politicians, and reporters are busy transmitting official claims. As CBS Evening News reporter Bob Orr (9/24/14) told viewers last week:

Pentagon officials said, in fact, the bombs and missiles hit every intended target.

When have they ever said any different?