Warehouse Workers ‘March On The Boss’ Of Verizon In Memphis 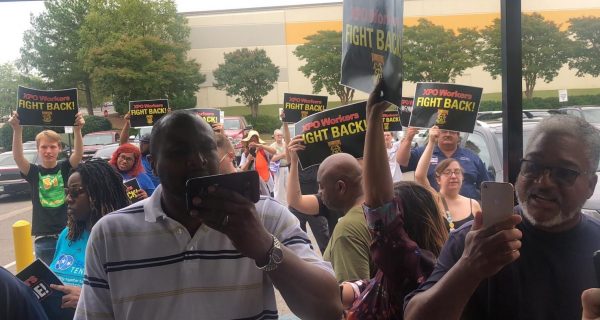 Memphis, Tenn. – Warehouse workers at XPO Logistics’ Verizon facility “marched on the boss” on October 1 in a marked escalation following months of worker complaints and legal filings over abuse, joined by community groups and elected leaders including Rep. Steve Cohen. They delivered a letter to management from Memphis NAACP and community groups, putting XPO on notice for health and safety issues, misconduct, discrimination and sexual harassment. The letter also demanded transparency into the independent investigation of those issues and the death of an employee and called for a joint meeting with the company and its supply chain customers.

After the march on the boss, workers joined a Memphis NAACP-led press conference outside the warehouse and hand-billed all 10 of XPO’s warehouse facilities – which employ over 3,000 full and part-time employees – with the letter detailing the company’s troubling record. At the press conference, workers and allied organizations called out serious abuses at XPO warehouses, including ones which led to the tragic death of XPO worker Linda Neal in the Verizon facility in October 2017.

“My friend and co-worker lost her life on the job because of the inexcusable inactions of XPO,” said Lakeisha Nelson, a warehouse worker at XPO’s Verizon facility, “Every day XPO workers like me endure unfair, inhumane treatment and are exposed to threats to our physical and mental health. We’re standing up in the warehouses because we are human beings with value and worth and we’ve had enough.”

… As community leaders and women’s rights advocates engaged in legal and policy work to fight against sexual harassment and active in the Times Up and Me Too movements, we are deeply concerned and troubled with the behavior of XPO Logistics. Therefore, we are calling for a joint meeting with Jacobs, the executive board and XPO’s customers in the supply chain (like Verizon, Cummins, Nike Golf and Disney) to discuss the company’s inexcusable actions and what steps each will take to stop the abuse and mistreatment of its workers.”

“Department of Labor has rules and regulations to see to it that there are safe working conditions and it has been alleged that there are not safe working conditions out here,” said Representative Steve Cohen. “… I was very disappointed they [XPO management] wouldn’t accept the letter, which is an easy way to deal with this issue. I was disappointed they wouldn’t allow me to go in and talk to them and give them that letter. It shows a disrespect for public officials, for you as my constituents but also as workers. And, it also shows an inability to understand public relations and the fact that they work within a framework that includes the Department of Labor and the United States Government, that they should have an interest in working with — the State of Tennessee as well as their State Representatives here. It’s been a disturbing scene to me, I don’t feel good about XPO Logistics. I didn’t feel good when I came out here and now I feel that the allegations that have been made have been confirmed to me in my mind, in the callous way they’ve treated us and treated me.”

“Our vision for black lives revolves around just and equitable treatment and access in all areas of our lives,” said Shahidah Jones, Coordinating Committee Member with the Black Lives Memphis chapter. “We more than deserve fair wages, safe and humane working conditions and dignity. That is why we sign and stand in solidarity with XPO workers.”

“When it comes to economic justice we will always show up,” said Antonio Blair with the Fight for $15. “We are here to fight with the Teamsters for the workers and their rights.”

“The Teamsters are proud to stand with XPO workers against inhumane, abusive workplace conditions in the warehouses,” said James P. Hoffa, General President of the International Brotherhood of Teamsters. “No worker should face triple-digit temperatures, 14-hour long shifts without real breaks, and the denial of critical medical attention. We’re demanding XPO change its tune, show workers the respect they are owed and take real action to solve abuse in its facilities—starting with a joint meeting with us and its big brand customers.”

XPO Logistics is a $15 billion company that packages and distributes products for major retailers across the globe. The death of XPO warehouse worker Linda Neal isn’t the only time the company has been in the news for dangerous and life-threatening workplace conditions. Earlier this month, workers filed a complaint with the Tennessee Occupational Safety and Health Administration (TOSHA) detailing dangerously high temperatures that have led to fainting and ER visits. In June, the Occupational Safety and Health Administration opened an investigation after two workers were crushed to death at an XPO Logistics warehouse in Lockport, New York.

XPO’s Memphis warehouses also have notoriously widespread issues with sexual harassment and discrimination and the Disney, Cummins and Verizon warehouses have seen waves of worker complaints. Over the spring and early summer, current and former female employees at XPO warehouses across Tennessee filed a total of 11 charges with the Equal Employment Opportunity Commission (EEOC). Workers reported sexual harassment including unwanted pushing, shoving, grabbing and kissing by supervisors. Workers also reported that they faced retaliation for reporting harassment.

In early May, leading groups in the #TimesUp and #MeToo movements delivered a letter calling on Verizon CEO Lowell C. McAdam and the company’s board of directors to meet with them and discuss next steps to end pervasive sexual harassment and misconduct in Verizon-contracted warehouses. After receiving the group’s letter, Verizon stated that it would investigate the complaints. At XPO’s annual shareholder meeting later that month, these groups joined the company’s employees to call on CEO Brad Jacobs and the board of directors to end pervasive sexual harassment and misconduct by supervisors.