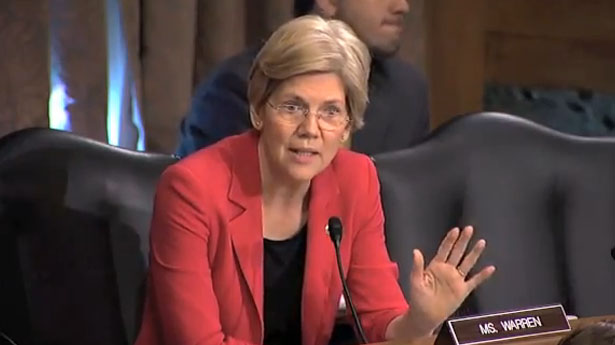 Warren Tells Obama To Put Up Or Shut Up

Note: President Obama has pushed the TPP and other corporate rigged trade agreements through by keeping them secret and then his administration lies about them. The public only knows about what is in the agreement thanks to leaks. He picked a fight with Senator Elizabeth Warren, comparing her to Sarah Palin talking about death panels. and she responded to his attack with the aid of Senator Sherrod Brown. Warren and Brown are right on the facts and their challenge for Obama to release the text is proof of his refusal to provide people with the facts they need to evaluate the issues. We recently reported on his desperate response to Warren: “The Administration’s Dishonest Response to Elizabeth Warren’s Attack on Secret Investor Arbitration Panels in Trade Deals.”

Previously we pointed out the dishonesty of the Obama administration on trade in an article describing a false blog about support in the environmental community, “White House Reveals Desperate Lack of Support for TPP”, support which is non-existent. The article described how this was a pattern of dishonesty writing:”

“This is not the first time the White House has been caught attempting to mislead on an important fast-track or TPP issue. Indeed, dishonesty seems to have become a tactic:

Congress should insist on the contents of the agreements and the US negotiating positions being made public before fast track is considered. President Obama should stop accusing Sen. Warren of dishonesty when everything she says is supported by the facts and it is President Obama and his administration that is not being transparent or honest.

WASHINGTON — Progressive Democrats have been hoping to see a showdown between Elizabeth Warren and Hillary Clinton for years. Instead, they’re getting a public feud between the senator from Massachusetts and President Barack Obama.

Obama accused Warren and congressional Democrats on Friday of being “dishonest” and spreading “misinformation” about the Trans-Pacific Partnership — a trade pact the administration is negotiating among 12 nations. The overwhelming majority of Democrats in Congress oppose TPP, while Republican leaders support it.

It was an unusually aggressive attack for the president — accusing members of his own party not of having misplaced priorities, but of actively working to deceive the public. Obama is rarely so severe even with his Republican opponents. Obama said that the Democratic criticism that “gets on [his] nerves the most” is the notion that his TPP pact is “secret,” and went on to insist that the terms of TPP will help American workers.

On Saturday, Warren and Sen. Sherrod Brown (D-Ohio) responded with a letter essentially telling Obama to put up or shut up. If the deal is so great, Warren and Brown wrote, the administration should make the full negotiation texts public before Congress votes on a “fast track” bill that would strip the legislative branch of its authority to amend it.

“Members of Congress should be able to discuss the agreement with our constituents and to participate in a robust public debate, instead of being muzzled by classification rules,” Warren and Brown wrote in the letter obtained by The Huffington Post.

Democrats and some Republican critics have been particularly frustrated by Obama’s decision to treat the TPP documents as classified information, which prevents them from responding to Obama’s claims about the pact in detail.

“Your Administration has deemed the draft text of the agreement classified and kept it hidden from public view, thereby making it a secret deal,” the letter reads. “It is currently illegal for the press, experts, advocates, or the general public to review the text of this agreement. And while you noted that Members of Congress may ‘walk over … and read the text of the agreement’ — as we have done — you neglected to mention that we are prohibited by law from discussing the specifics of that text in public.”

Warren and Brown appeared particularly miffed at being accused of lying.

“We respectfully suggest that characterizing the assessments of labor unions, journalists, Members of Congress, and others who disagree with your approach to transparency on trade issues as ‘dishonest’ is both untrue and unlikely to serve the best interests of the American people,” the letter reads.

The White House was not immediately available to comment.

Some of Obama’s claims about TPP on Friday took some creative license with the truth. He said that he wanted a trade deal that would allow American automakers to sell more cars overseas, without mentioning that Ford and autoworker unions do not support the pact. He also said that he had not included any language barring currency manipulation — a key tactic by which Japan and China undercut American production — because it might hamper the Federal Reserve’s monetary policy operations. That scenario would only be possible if the pact defined “currency manipulation” in a particularly bizarre manner.

The Warren-Brown letter also includes a subtly vicious Democrat-on-Democrat dig, suggesting that Obama’s trade transparency record is worse than that of former President George W. Bush. They note that Bush published the full negotiation texts of a major free trade deal with Latin America several months before Congress had to vote on giving the deal fast track benefits. The Obama administration has resisted calls to follow suit with TPP.

“What was true then remains true now,” the letter reads. “The American people should be allowed to weigh in on the facts of the TPP before Members of Congress are asked to voluntarily reduce our ability to amend, shape, or block any trade deal.”

The Obama administration has been negotiating the TPP deal since the early days of his presidency. Democrats and a bloc of House Republicans lead by Rep. Walter Jones (N.C.) are concerned that the pact — which has not been finalized — will exacerbate income inequality and undermine U.S. authority to write its own regulations, while Obama and Republican leaders say the deal will help all Americans by boosting economic growth. The U.S. Chamber of Commerce and other top corporate lobbying groups support the deal, while environmentalists, organized labor and many Tea Party organizations are opposed. Warren and Brown said that corporate support for the deal shouldn’t be surprising.

“Executives of the country’s biggest corporations and their lobbyists already have had significant opportunities not only to read [the TPP text], but to shape its terms,” the letter reads. “The Administration’s 28 trade advisory committees on different aspects of the TPP have a combined 566 members, and 480 of those members, or 85%, are senior corporate executives or industry lobbyists. Many of the advisory committees — including those on chemicals and pharmaceuticals, textiles and clothing, and services and finance — are made up entirely of industry representatives.”

By focusing his attacks on Warren, Obama has elevated a quiet political quest to win over congressional Democrats into a prominent public debate with one of the most popular figures in his party, one widely seen as its standard-bearer on economic policy. Brown is one of the top Democratic experts on trade policy. His 2006 book detailing problems with the North American Free Trade Agreement and other trade pacts is celebrated by progressives.

Democrats have been wringing their hands about the potential damage the dispute on Capitol Hill could do to the party, particularly as the 2016 elections get into gear — a concern that is only compounded by the vitriol now being exchanged between two of its most prominent figures. Democratic presidential front-runner Hillary Clinton haslargely avoided addressing TPP in the early stages of her campaign.