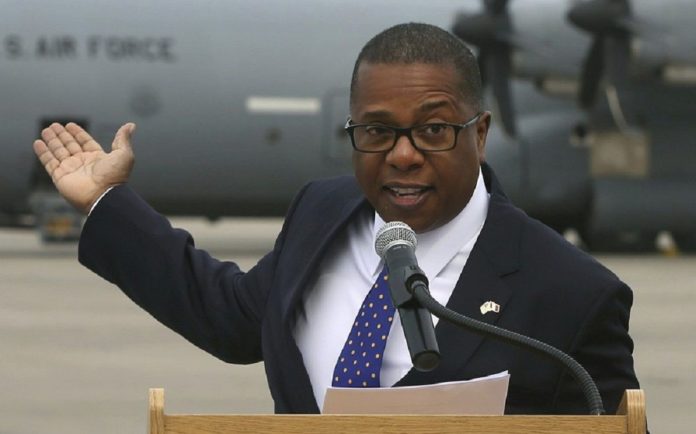 Above Photo: Brian A. Nichols, shown here in a file photo from 2017, was recently confirmed as Assistant Secretary of State for the Western Hemisphere. (Martin Mejia/AP).

The government of the United States ratified its seditious policy against Venezuela by continuing to recognize former deputy Juan Guaidó as the interim president of Venezuela.

On Tuesday, November 16, the Undersecretary of State for the Western Hemisphere, Brian Nichols, confirmed that the US still recognizes former deputy Juan Guaidó “and his government.”

The statement was made during Nichols’ appearance before the Foreign Subcommittee of the Chamber of Deputies, in which Nichols was asked whether the US administration plans to recognize the President of Venezuela, Nicolás Maduro.

“We recognize the interim president Juan Guaidó and his government,” Nichols replied. “We continue to work closely with them.”

Likewise, Nichols ruled out any recognition of the real Venezuelan government, noting that he does not see any change in the administration’s position.

It seems that the conspiratorial agenda strengthened by disgraced former president Donald Trump is being maintained, given that current president Joe Biden does not plan to withdraw his support for the former deputy used by the US in its failed “regime”-change operation against President Maduro.

The support of the US continues despite the fact that several countries long ago withdrew their recognition of Juan Guaidó, in addition to politicians within Venezuela who worked with him and were part of his alleged government who have jumped ship.

Nevertheless, it seems that the interventionist policy of the US will continue in order to destabilize Venezuela and to continue increasing Guaidó’s salary, which during 2021 was $2.6 million according to data from right-wing news outlets.

Many analysts see the Biden administration’s continuation of the status quo as a necessary stance due to all the mistaken decisions of the US’s policy of attempting to oust Maduro’s government. A reversal of course would imply several contradictory and embarrassing implications.

The US’s ongoing interventionist aims were made quite clear this Tuesday, when the US State Department tried to disparage the process that is being carried out for Venezuela’s regional and municipal elections to be held this Sunday. The continued diplomatic assault, according to analysts, is not based in political or strategical calculations but on economic ones, connected with the robbery of Monómeros, CITGO, and Venezuela’s gold held in the Bank of England, among many other Venezuelan assets and financial resources.

Some reports from right-wing media outlets alleged that the US State Department declared that the elections to be held in Venezuela this Sunday “will be manipulated,” another indication that the US maintains its strategy of ignoring the popular will, as it has done recently with Nicaragua’s election.

“Even Washington, in its magnanimous arrogance, knows that the Guaidó project is not working anymore, and the White House might be examining the crazy house of cards they have build around Guaidó to determine witch card to withdraw in order to avoid its total collapse,” an international affairs expert told Orinoco Tribune.