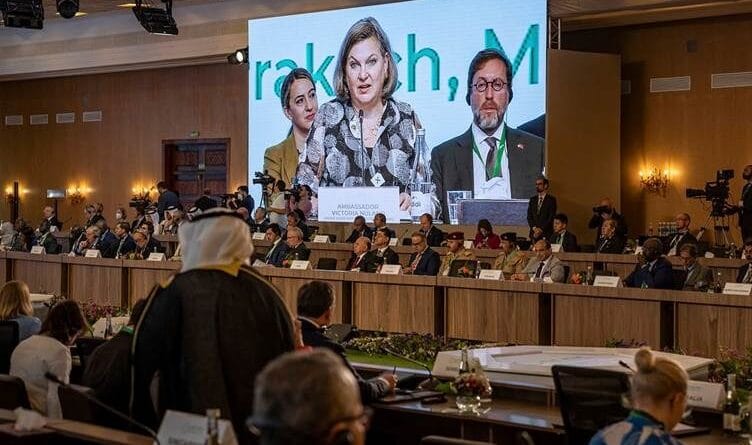 Above Photo: A screen shows a projection of US State Department’s Under Secretary of State for Political Affairs Victoria Nuland speaking in Marrakech on May 11, 2022. Fadel Senna / AFP.

Under cover of media focus on the NATO proxy war in Ukraine and the Zionist assassination of Al Jazeera senior correspondent Shireen AbuAkleh, Washington is making moves to annex Syrian territory.

On May 11th during the meeting of the “global coalition against Islamic State” in Marrakech, Morocco the U.S acting assistant Secretary of State, , made an extraordinary move that has largely gone under the radar of even independent media. Everyone is distracted by events in Ukraine and the Palestinian Occupied Territories.

Nuland who famously exclaimed “Fuck the EU” during recorded conversations that exposed the US State Department involvement in the 2014 coup in Ukraine and the subsequent massacre in Odessa by the Washington’s Nazi Contras is now turning her attention to Syria’s north-eastern territory.

Nuland has announced that the US will allow foreign investment in north-east Syria under the control of the Kurdish Separatists, another US Coalition proxy in Syria. These investments will not be affected by the unprecedented sanctions that are effectively blockading Syria.

The most savage of these economic measures were introduced under the Trump administration – the Caesar sanctions that are designed to inhibit any external assistance for Syria from within the Syrian alliance, including Russia and Iran.

The Caesar Syrian Civilian Protection Act is also fraudulent by claiming to “protect civilians”. In reality, it is punishes and hurts the vast majority of 17 million persons living in Syria. It will result in thousands of civilians suffering and dying needlessly. – Rick Sterling

Needless to say that the de-facto unilateral sanctions being applied as a collective punishment for the entire Syrian population living in areas protected by the Syrian government are illegal. To extend those sanctions to sovereign nations providing assistance to rebuild Syrian infrastructure is barbaric and a deliberate attempt by the US to ensure that Syria cannot recover from the eleven year war waged against it.

The  coercion in Syria was made clear by previous Secretary of State, Mike Pompeo’s point-man on Syria, Ambassador James Jeffrey, who not only described Al Qaeda as a “US asset” in Syria but also bragged openly about the misery that sanctions had brought to the Syrian people:

Journalist Rick Sterling also pointed out the illegality and brutality of the Caesar sanctions:

The US has multiple goals. One goal is to prevent Syria from recovering. Another goal is to prolong the conflict and damage those countries who have assisted Syria. With consummate cynicism and amorality, the US Envoy for Syria James Jeffrey described his task: “My job is to make it a quagmire for the Russians.”

The United States intends in the next few days to issue a general license to facilitate private economic investment activity in non-regime held areas liberated from ISIS in Syria.

The irony here of course is that ISIS is in reality another proxy of the US Coalition that had benefitted from the oil resource revenue prior to the occupation of the oil fields by the Kurdish Contras. There is also a degree of collaboration mired in corruption between the Kurdish Separatists and ISIS both focused on the ethnic cleansing of the north-east to make way for an “autonomous region” effectively controlled by Washington, London and Israel. As Syrian researcher, Ibrahim Wahdi, wrote back in February 2022:

We can clearly see that the largest organized smuggling and mass transfer of ISIS militants towards the Syrian Badia connected with the Iraqi border north of Al-Tanf region, which coincided with the Ukraine crisis and the negotiations of the Iranian nuclear deal, aims to trigger chaos by CIA and Israeli intelligence through reviving ISIS to keep it as a pretext for the US occupation of Syrian lands.

Nuland’s claims that investment in areas “previously held” by ISIS are “needed to prevent a resurgence of Islamic State by allowing it to recruit and exploit local grievances” is hypocrisy of the highest order. Washington and London are recruiting, arming and equipping ISIS terrorists and embedding their fighters in areas of the Badia desert (East of Homs) where they can do the most damage to Syrian Arab Army installations and convoys – this includes the disruption of the meagre oil supply to Damascus from the north-east. As Wahdi pointed out:

The danger of the ISIS card lies in the large numbers distributed among 9 prisons in the US-backed SDF-controlled areas, which are potential targets for similar attacks [to release ISIS terrorists], especially the “Kamba Al-Bulgar” prison, east of Al-Shaddadi city in the southern countryside of Hasaka, which includes 5,000 ISIS militants.

In addition to Al-Sina’a prisons, Al-Shaddadiyah, Derek/ Al-Malikiyah, Al-Kasra, Al-Raqqa Central Prison, Rmelan and Nafker in the Qamishli city, from which 60 ISIS militants were transferred to a prison in Al-Hasakah last September.

Both ISIS and the Kurdish Contras are responsible for the theft of oil from Syria. Al Qaeda has the monopoly of the processing of the stolen oil via its WATAD organisation. The US Coalition has a vested interest in bringing the Syrian population to its knees and to stir up dissent against the Syrian government that has trashed the Coalition military plans for regime change.

The war against Russia in Ukraine is also revenge for Russia’s role in genuinely fighting ISIS in Syria and forcing the terrorist entity to withdraw to the north-east and Iraq where it is equally responsible for the destruction of civilian infrastructure in particular electrical installations to further punish any Iraqi resistance to US occupation.

Not only will these sanction-free licenses apply to the Kurdish Contras but the Turkish backed militia occupying the northern border zones of Syria will also be included in the deal. This means that Syrian territory will be de-facto annexed by these NATO-member-state proxies including Al Qaeda (Turkey) and affiliates.

According to a diplomat who has discussed the issue extensively with U.S officials, the license will apply to agriculture and reconstruction work but not to oil. I guess there is no need to include oil as that is already considered a U.S benefit of the war they started in 2011. After all Trump  “we’re keeping the oil – I’ve always said that — keep the oil. We want to keep the oil, $45 million a month. Keep the oil. We’ve secured the oil.”

If the license will apply to reconstruction and agriculture, this will legitimize the building of settlements and the continued theft (by the Kurds) of Syrian agricultural produce in the region, the occupation of the wheat storage centers and the reduction in supply to Damascus of these essential resources. Essentially doubling down on the siege of the Syrian people who are already suffering severe food insecurity, poverty, fuel and energy deprivation on a terrible scale.

The act of withholding means of sustaining life to innocent civilians in order to coerce an entire nation into submission to foreign agendas in the region must surely qualify as economic terrorism. The destruction of essential civilian infrastructure is a war crime, the withholding of essential resources or occupation of those resources is also a war crime. One could argue that the US Coalition is responsible for genocide in Syria under Genocide Convention article II (e) – deliberately inflicting on the group, conditions of life calculated to bring about its physical destruction in whole or in part”.

When Washington talks about “stabilization” activities in the areas its “allies” took from Islamic State they are lying. Its “allies” are being led to believe they will benefit from cooperation with the U.S. In reality they are useful tools to facilitate the U.S and Israeli agenda in the region – to balkanise Syria and above all to secure the illegal US Al Tanf military base in the south-east (bordering Jordan) to prevent the linking of the Resistance Axis from Iran to Lebanon and ultimately Palestine. To protect “Israeli security” in the region.

The organized smuggling and transfer of ISIS terrorists towards the Syrian Badia connected with the Iraqi border north of Al Tanf is to maintain the CIA/MI6/Israeli chaos strategy in Syria and to justify US occupation of Syrian territory under the faux ISIS pretext.

What Nuland is proposing is a step forward for Washington in the annexation of Syria’s most resource rich territory. It is annexation by proxy. Turkey will also benefit from these license schemes and will further embed its Al Qaeda-led militia in the northern border areas thus ensuring permanent insecurity for Syria to the north.

Arabs, Assyrians and Armenian will necessarily be ethnically cleansed from these zones to make way for these US-sanctioned settlements and it is common knowledge that the Kurdish Contras have been preparing for this for some time – banning the Syrian curriculum in schools and razing Arab houses in the area while forcing conscription onto local communities, running campaigns of kidnapping and detention.

Nuland informed coalition members in Marrakech that “Washington wanted to raise $ 350 million for these alleged “stabilization” activities in north-east Syria during 2022. Iraq is also the target of the same “stabilization” campaign. What Nuland really means is that Washington under cover of Ukraine will move to secure permanent violation of Syria’s territorial integrity while feigning outrage that Russia is violating the sovereignty of Ukraine already occupied by NATO and little more than Washington’s satellite vassal state on the border with its arch enemy Russia.