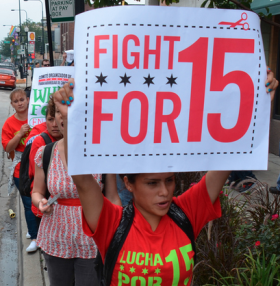 Washington Supreme Court Rules For $15 An Hour At SeaTac

Above: Fight for 15 demonstration from Steve Rhodes on Flickr

Workers at Seattle-Tacoma International Airport must be paid a minimum wage of $15/hour in accordance with the City of SeaTac’s Good Jobs law (Proposition #1, enacted by voters in 2013) the Washington State Supreme Court ruled today.

In a 5-4 decision authored by Justice Susan Owens, the Court held the airport is not exempt from the law, even though it is administered by the Port of Seattle.

The case, No. 89723-9, involves four different parties. The respondents and cross-appellants are several businesses: Filo Foods LLC, BF Foods, LLC, Alaska Airlines, Inc. and the Washington Restaurant Association. As Filo Foods is the lead respondent, its name appears throughout the text of the Court’s opinion.

“Second, Filo Foods contends that under state law, Proposition 1 may not be applied at the Seattle-Tacoma International Airport.”

“We conclude that Proposition 1 can be applied at the airport because there is no indication that it will interfere with airport operations.

“Thus, we find Proposition 1 valid in its entirety.”

The Court’s decision – a remarkable dismissal of all the issues raised by the business groups opposed to the law – is a significant victory for Washington State’s labor movement and will result in many more workers receiving badly needed wage increase and additional protections while on the job.

Up until now, the SeaTac Good Jobs initiative has only been enforced in the City of SeaTac outside of the airport, due to lower courts having ruled that the City did not have the authority to set wages inside the airport.

Now that the Supreme Court has found otherwise, the Good Jobs initiative can take full effect and work the way that it was supposed to.

Attorney General Bob Ferguson released a statement praising the ruling and noting his office’s involvement in the case, which reads in part:

In holding that the City’s ordinance protects airport workers, the Court relied in part on the AG’s argument about how to interpret the state minimum wage law:  “This argument regarding the Washington Minimum Wage Act was first advanced by the Washington State Attorney General.” (Filo Foods, LLC v. City of SeaTac, page 19.)

“I’m pleased the Court adopted my office’s proposed approach as a key part of its 5-4 decision,” Ferguson said.

“This important ruling helps protect the rights of workers at SeaTac Airport and recognizes the broad authority state and local governments have to support their hard-working residents.”

Unlike cities, which are granted “the broadest powers of local self-government,” RCW 35A.01.010, a port district is a special purpose district, which “is limited in its powers to those necessarily or fairly implied in or incident to the powers expressly granted, and also those essential to the declared objects and purposes of the corporation.”

She goes on to note:

The legislature expressly instructed that the purpose of the statutory scheme is to ensure uniformity in the laws regarding aeronautics. RCW 14.08.340. Additionally, the law detailing the specific powers of municipalities operating airports, RCW 14.08.120(1), provides that a municipality may establish a board responsible for “the construction, enlargement, improvement, maintenance, equipment, operation, and regulation [of the airport or other air navigation facility].”

These aspects of the statutory scheme lead us to conclude that the legislature intended to vest authority for the operation of the airport exclusively with the Port of Seattle, but not to prohibit a local municipality like the city of SeaTac from regulating for the general welfare in a manner unrelated to airport operations.

Four of Owens’ colleagues took issue with this rationale and signed a dissenting opinion holding that the state’s Revised Airports Act does prevent the City from being able to enforce the Good Jobs Initiative at the airport. (The dissenting opinion is concerned with this issue alone; the justices were all in agreement that federal labor law does not preempt the SeaTac Good Jobs initiative).

“I disagree with the majority’s conclusion that Proposition 1 may be applied at the Seattle-Tacoma International Airport consistent with the Revised Airports Act, RCW14.08.330,” Justice Debra Stephens writes, beginning her dissent.

She goes on to say: “In my view, the majority’s result offends the statute’s plain language, which provides that ‘[e]very airport’ shall be under ‘the exclusive jurisdiction and control’ of the ‘municipality…  controlling and operating it.’”

“Here, it is undisputed that the Port of Seattle controls and operates the Seattle-Tacoma International Airport. Its jurisdiction is therefore exclusive. Further, the statute provides ‘[n]o other municipality in which the airport… is located shall have any police jurisdiction of the [airport].’”

Stephens goes on to argue:

The majority’s distinction, between the airport as a geographic area and as a set of functional activities (“airport operations or the subject of aeronautics,” id.), is nowhere to be found in the statute. The subject of the statute is simply “[e]very airport.” RCW 14.08.330.

The statute does not slice and dice an “airport” to reveal some sort of “core airport function” judicial test. Instead the statute concerns, as its language says it does, the airport.

The statute then has one exception to that rule. The exception provides “However, … a municipality in which an airport… is located may be responsible for the administration and enforcement of the uniform fire code… on that portion of any airport… located with its jurisdictional boundaries,” so long as it does this “by agreement with the municipality operating and controlling the airport,” (the Port of Seattle). Id. Thus, a fire code is the single circumstance in which the city of SeaTac can enforce its laws within the airport.

The majority opinion contains a response to this argument:

The dissent asserts that the provision of RCW 14.08.330 related to the administration and enforcement of local fire codes “disproves” our interpretation of the statute. Dissent at 6.

The house committee in support of the bill testified, “Seattle has been enforcing its uniform fire code on the portion of the King County airport located within its boundaries, but their attorney feels they may not have this authority… This bill clarifies an ambiguity in current law.” H.B. REPORT ON H.B. 139, 49th Leg., Reg. Sess. (Wash. 1985).

That language shows that the legislature added the fire code language because it recognized that the statute’s ambiguous language called into question Seattle’s ability to enforce the uniform fire code.

By adding in the language, it “clarifie[d] an ambiguity.” 5 Id. Rather than disproving our interpretation, the house bill reinforces our conclusion that the statute’s language is ambiguous.

The dissenting justices feel that the Court’s holding in this case sets an unwelcome precedent and will result in confusion going forward. They assert:

The legislature did not intend to foster a cottage industry of litigation over airport operations, where the courts arrive at case-by-case conclusory determinations under an imprecise test. It chose to draw a clear line. It enacted a statute that gives exclusive jurisdiction and control to the operating municipality. RCW 14.08.330.

And it specifically said that “[n]o other municipality in which the airport … is located shall have any police jurisdiction of the [airport].” Id.

The legislature understood that because airports are unique, complex operations, they should be governed by one and only one local government—the one that specializes in controlling and operating them. This desire to have legal clarity at airports is especially understandable considering that airports can straddle multiple municipal, county, or state lines.

Given that a majority of our Supreme Court thinks the existing statute is ambiguous, the Legislature may wish to amend the Revised Airports Act to more clearly define where a city’s authority ends and a port’s begins.

In the meantime, because the City of SeaTac’s interpretation of the state laws governing ports has prevailed, workers earning the lower minimum wage set by the Port of Seattle will see their pay go up. That’s a victory to be celebrated.