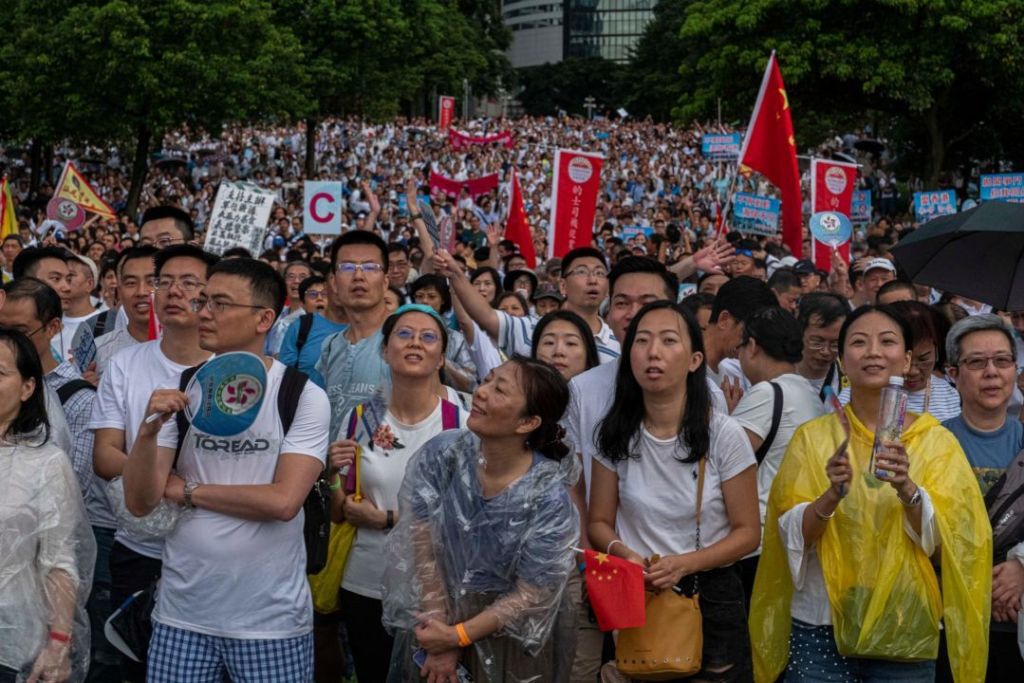 Above Photo: Tens of thousands in Hong Kong demonstrate in support of the Chinese mainland. Photo: New York Times, Aug. 23

It is impossible to separate the counterrevolutionary colonialist demonstrations in Hong Kong from Washington’s new cold war against the People’s Republic of China (PRC). (See article “The New Cold War Against China,” lowwagecapitalism.com.}

The over two-month-long campaign of demonstrations–which are really for independence from the mainland and aimed at detaching the city from China–are sustained and guided by superpower resources from Washington and London, with an assist from Taiwan’s separatist forces.

The CIA-run National Endowment for Democracy (NED) and other U.S.-run nongovernmental organizations (NGOs) are in the thick of the demonstrations. U.S. diplomats have met with so-called student leaders as an offer of support. (See the article in Fight Back News, Aug. 19, 2019.)

There are millions of poor workers in Hong Kong. Most of them are in low-paying jobs, including retail, food and drink, estate management, security, cleaning, elder care and courier services, among others.

They live in costly housing because the real estate industry has been dominant under Hong Kong capitalism, as have finance, tourism and other high-paid services. But you don’t see these workers on the streets demanding separation from mainland China.

Another thing you won’t see is the thousands of demonstrators who came out to defend the Hong Kong police and the Chinese mainland on Aug. 26 and denounce the protesters. “A rally organized by the Great Alliance to Protect Hong Kong, a new umbrella organization, drew tens of thousands of people to a park near the headquarters of China’s military garrison earlier this month.” (New York Times picture caption, Aug. 27, 2019)

In fact, the South China Morning Post reported on Aug. 23, 2019, that several thousand accountants joined the march for “democracy” in Hong Kong recently. The four largest accounting firms in the world, known as the “Big Four” are in Hong Kong. The four firms and their 2018 revenue in U.S. dollars are as follows:

What you see instead are thousands of middle class anti-China demonstrators who are demanding autonomy for one of the largest financial centers in Asia. Hong Kong became a financial and commercial center under British colonial rule. London ruled Hong Kong for 156 years until it was forced to turn over sovereignty to the mainland in 1997.

According to Wikipedia’s list of banks in Hong Kong, 70 of the100 largest banks in the world are in this tiny city. This includes the largest U.S. and British banks. The largest insurance companies, hotel chains and tourist agencies are there as well.

It is hardly surprising that the imperialist NGOs and think tanks are able to mobilize thousands of professionals to take to the streets to separate from the mainland. And they carry out their protests violently, while the capitalist media complain about the Hong Kong police, who are under siege from the demonstrators. (Struggle-La Lucha, Behind the anti-China Protests in Hong Kong, Aug. 19, 2019)

In the meantime, “Australia has emerged as an ideal destination for Hong Kong millionaires who are looking to emigrate from the Chinese semi-autonomous territory reeling from political turmoil.

“A notable rise in applications for the Significant Investor Visa (SIV) program, which grants direct residency to applicants, has been filed with the New South Wales state migration department over the past months, reported Reuters. Interested individuals have to invest at least A$5 million (US$3.4 million) to be eligible for the program.” (Taiwan News, Aug. 23, 2019)

U.S. imperialism, the CIA, the Pentagon and the State Department want to use the Hong Kong demonstrations to vilify the PRC and socialism. The demonstrators are being as provocative as possible in order to try to draw the People’s Liberation Army (PLA) into the battle. Many demonstrations have gone right up to the PLA garrison in Hong Kong with provocative acts and slogans.

Washington’s goal is to be able to create a new version of Tiananmen Square and raise a worldwide hue and cry against China, the way they did in 1989. National Security Adviser John Bolton, Secretary of State Mike Pompeo, the CIA and the military want a rerun as they drum up war fever against China.

Describing a recent demonstration, the Wall Street Journal of Aug. 24 wrote, “Tear gas engulfed the industrial neighborhood of Kwun Tong as protesters were more aggressive, blocking roads, surrounding the local police station and sawing down at least one video-surveillance pole, which protesters said could be used to spy on people.

“Demonstrators with poles fought face to face with the charging police, knocking some to the ground and sending others scrambling back. Some threw rocks at the police. A small fire bomb exploded amid the melee.“

This attack on the police, who held up signs warning the demonstrators to stop, came shortly after the Hong Kong chief executive, Carrie Lam, offered to enter into dialogue with the protesters. Lam said she “would be open to talking to the community.” In a post on her official Instagram account on Saturday—ahead of the latest violence—she said everyone was tired after months of protests and asked if “we can sit down and talk about it” after a calmer week. (WSJ, Aug. 24, 2019)

In other words, the reactionary forces tried to break up any move by the Hong Kong leadership to calm the situation.

On the day before the attack on the police, there was a demonstration in which the protesters held hands in the streets of Hong Kong.

“Hong Kong residents on Friday night formed human chains across large parts of the city in … a display that recalled a major anti-Soviet demonstration from 30 years ago. The message was clear today just as it was at the time of the USSR: get free of mainland China.” The demonstration was called the “Hong Kong Way.” (New York TImes, Aug. 23, 2019)

The Hong Kong Way demonstration, the attack on the police station the following day, the provocations against the PLA garrison in Hong Kong, the ransacking of the legislature, all these are signs of a Washington-London strategy of trying to provoke some type of Chinese intervention which can then be used to vastly escalate political tensions against the PRC. The Chinese Communist Party has reacted with great restraint in the face of these vicious provocations. Instead they have supported the pro-China forces in Hong Kong who don’t want to sell their country to imperialism.