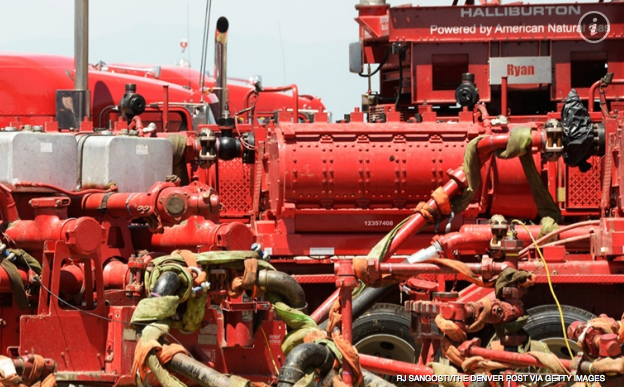 Note: At Popular Resistance we do not see a worthy debate here. Taking money from fracking-related corporations and then coming out in favor of fracking should be assumed to be corruption. The damage fracking does to water, climate, increased toxicity, earthquakes and other ecological effects is significant. It is impossible to compromise with the fracking industry, i.e. there is no safe fracking.

In 2012, when Ohio’s Senate passed a controversial hydraulic fracturing bill that was supported by the oil and gas industry, environmental groups lined up against it, saying it would endanger public health. But during hearings on the bill, it gained one seemingly unlikely supporter: the Environmental Defense Fund (EDF), one of the nation’s largest green groups.

The bill supported renewable energy development but it also contained several items other environmental groups said were giveaways to the industry: It allowed fracking companies to keep private the chemicals they used in fracking, changed the required distance for contamination testing around a well from 300 feet to 1,500 feet, and prevented doctors from sharing information that might be considered trade secrets, even if it was in the interest of public health.

Matt Watson, one of EDF’s policy analysts, said at the hearing, “We would like to commend the General Assembly and the governor for the thoughtful approach that has been put forward.”

The group’s support for the bill highlighted a growing divide in the environmental movement, especially when it comes to natural gas. As fracking has expanded to dozens of states across the country, environmentalists have essentially been split into two camps: those who believe the process must be stopped at all costs, and those who believe drilling is inevitable, and so it’s better to work with industry on making it safer for the environment.  But a new report critical of that latter group suggests that at least in some cases, environmental organizations’ work with the industry may cross ethical lines, and at worst become tacit support of industry-backed positions.

The new report, released by Buffalo-based non-profit Public Accountability Initiative, focuses on one group called the Center for Sustainable Shale Development, which is a partnership between gas drilling companies, environmental groups and other nonprofits.

CSSD’s mission is to promote safe drilling of shale — the kind of rock that fracking breaks up — in the Appalachian Basin. The group doesn’t try to hide its industry connections, and the names of the environmental groups that support it are clearly listed on the center’s website.

But PAI’s report posits that the group is less a way for environmentalists to influence the oil and gas industry than it is a way for the industry to promote its agenda with the stamp of approval of green groups like EDF.

Among the report’s findings: the group’s executive director, Susan Packard LeGros, is a former oil industry lawyer who worked with oil, gas and chemical companies. One of the group’s board members, Jared Cohon, also worked at a similar group called the Center for Indoor Air Research, which was found to have strong ties to tobacco companies. And one of the group’s new supporters, the Claude Worthington Benedum Foundation, was started by a titan of the oil and gas industry.

“[Environmental groups] are pouring money into calming fears and calming objections,” said Vera Scroggins, a prominent anti-fracking activist in Pennsylvania. “They’re basically promoting something that’s been created by the industry.”

The new report comes a year after PAI originally looked into CSSD. That report found similar evidence of other CSSD members and supporters being linked to the oil and gas industry in ways not disclosed by CSSD.

Since that report, three non-profits dropped out of CSSD, including the Heinz Endowments, the William Penn Foundation, and the Citizens for Pennsylvania’s Future.

“We disagree with the position suggested by the organization’s name that fracking can be made environmentally ‘sustainable,’ and given the pace of shale development we do not believe that the goals of protecting environmental and public health are best served at this point by standards that are voluntary and unenforceable,” Heinz Endowments said in a statement.

Several groups, including EDF, the Clean Air Task Force, the Group Against Smog and Pollution, and the Pennsylvania Environmental Council are still participating in CSSD.

Supporters of the groups say it’s important to not let perfection become the enemy of progress.

“If unconventional shale gas development is going to proceed, it needs to be done with strong and enforceable regulation and it needs to adapt so it can get better and better,” said Davitt Woodwell, the president of the Pennsylvania Environmental Council. “For us, the only way to do that is to understand what the industry is doing and how they operate so you can put forward strong proposals.”

Woodwell says whether you support fracking or don’t, it’s important to face reality and work to make an already-existing process better. But PAI’s executive director Kevin Connor says the working-in-tandem approach does more harm for the environmental movement than good.

“They put a friendly face on the dirty work that these industries do,” Connor said.

Regardless of whether collaboration is beneficial or detrimental, some say it’s inevitable.

Michael Yaziji, a professor at Switzerland-based business school IMD, and co-author of a book about the partnerships and conflicts between non-profits and corporations, says in a world where green groups are competing for resources and volunteers, it makes sense that they use different tactics to stand out: Some promise to make progress by working with an industry, while others build their credibility among donors and supporters by taking a strong stance against it.

“The NGOs are almost like an industry,” Yaziji said. “They serve their stakeholders — their funders and their constituents. So they have to ask, ‘what differentiates us from the competition?’”

Yaziji says the dynamic is nothing new: Cement giant LaFarge collaborated with the World Wildlife Fund on CO2 reduction initiatives for 13 years, until 2013. Oil and gas giant Shell has partnered with several organizations, including the International Union for Conservation of Nature.

But with fracking so prominent in today’s news, and expanding so rapidly across the U.S., it seems the collaborations are being met with more anger and passion than ever before.

“The whole premise of [this kind of collaboration] is that we can just nicely ask these companies to not pollute us, and that’s never going to work,” said Alison Auciello, an organizer for Food and Water Watch in Ohio. “They’re kind of standing directly in the way of what we’re doing.”