Above: Photo from Guardians of Taos Water website, https://www.taoswaterprotectors.org/.

Water Protector Buck Johnston of Taos, New Mexico pulled off a daring 4-day direct action at the top of a multistory well drilling rig this week. On March 14th, accompanied by a small action support team, he scaled the equipment and hooked into the top of the multi-story tower with a climbing harness. He brought food, water, sleeping bag, and a plan to remain in place for four days. 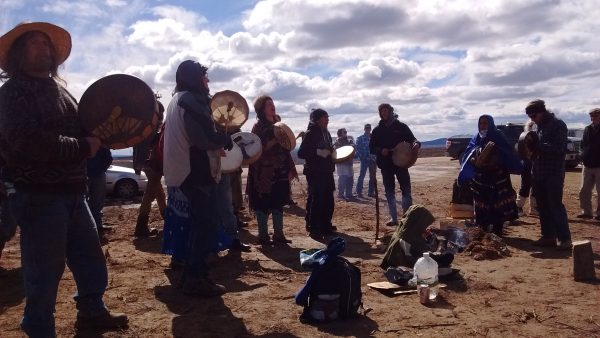 On the ground, a group of citizens called Guardians of Taos Water (GOT Water) lit a ceremonial fire at the gate near the highway, lifted song and drum, and began a peaceful prayer action in support of his direct action. Buck Johnston’s livestream video from the top of the tower swiftly circulated through the small community and alerted the public to the action. An encampment sprang up with continuous prayers, a community-driven food station, tents, and teepee.

On Sunday morning (March 17), with Indigenous song and drums prayers and a crowd of 250+ witness, he safely descended, received a ceremonial cleansing at the foot of the rig from friends and family, and surrendered peacefully to arrest. He has been released and faces two minor charges (at the time of this writing).

This Indigenous-led action is protesting part of a controversial water agreement that plans to drill 16-plus deep aquifer wells in order to extract large quantities of water from previously untapped deep aquifers beneath the Taos Valley Watershed. GOT Water is concerned about the impacts of these wells whose potential risks include collapsing the complex watershed ecosystem by overdrawing the lower aquifer.

“GOT Water wishes to bring (the issue of the deep well drilling) front and center to the community, and we are calling for a halt to all drilling until the community has been properly informed and a comprehensive and cumulative Environmental Impact Study has been conducted examining the cultural and environmental impacts of all 16-plus deep aquifer wells.” 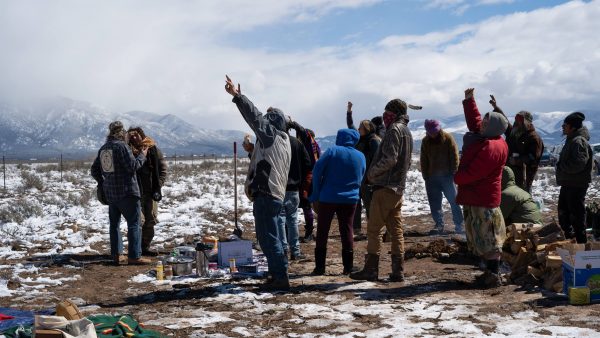 GOT Protest Image by Antony Page

Multiple law enforcement agencies are on the scene. Negotiators rode the fire department’s bucket lift up into the air and spoke with Johnston for several hours. On the ground, the situation remained peaceful and calm. Local citizens honked as they drove past. Others pulled over and delivered food, warm beverages, and supportive words. Children and elders participated in the prayers. Drumming and traditional songs rose up to support Buck Johnston in his bold action.

“I know he’s prepared and he has all our support. It’s all for the water and the land,” Maria Jim, a water protector, and Johnston’s wife, said to the Taos News. The settlement “is not for us locals. It’s for people who want to exploit and suck life out of the earth,” she added.

Water is a big deal in this high mountain desert community. It’s a complex issue. The controversial agreement that triggered the deep well drilling involves over 70 political bodies, including the town, county, state, federal agencies, Taos Pueblo, and over 60 Acequia Associations that democratically manage historic irrigation systems in the area.

Many water protectors feel it’s a watershed moment – both literally and metaphorically – for the small desert town. As climate change intensifies drought conditions and the community runs up against the limits of their surface and shallow well system, the residents must make important decisions about how to supply their water needs . . . and how those “needs” are defined. GOT Water is drawing connections between a proposed 400-dwelling development and the push for drilling into a non-replenishing aquifer. (For perspective, Taos is the largest town in the area at 5,700 residents.) Many feel that these deep wells are largely intended to enable development rather than meeting existing water needs. 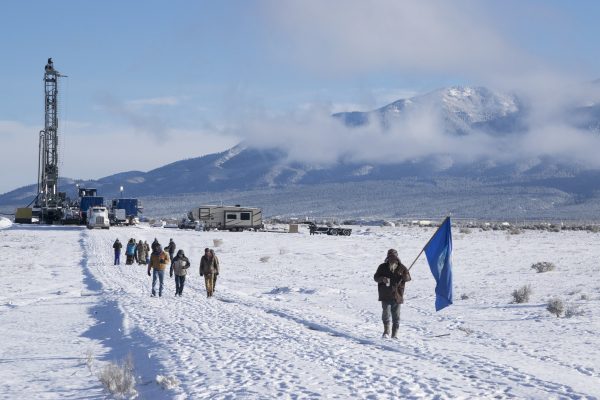 At the heart of the peaceful prayer action is the belief that drilling into the ancient aquifer takes the community in the wrong direction. GOT Water is urging for broader community participation in addressing the underlying water issues. Meanwhile, some community members are raising up alternative approaches, looking to conservation measures, rainwater catchment, better forest and field water management, and other creative solutions that form a holistic, sustainable approach to water resources.

Buck Johnston’s action has already achieved one of its important goals: breaking the silence in the community around the deep well drilling.  GOT Water is committed to involving the community in the democratic process around these issues. Many of the group members were at Standing Rock, serving in the front line and support roles. Others organized as part of the solidarity caravans that traveled back and forth from Taos to Standing Rock for months. Now, they’ve returned to their community with resistance skills and a fierce passion for protecting the water.

“GOT Water is dedicated to the practice of non-violence and our mission is: To protect and preserve the natural systems in the Taos Valley on which all life depends. GOT Water recognizes we are part of a long legacy of humble earth guardians and dedicated water protectors, and we are here to emphasize regenerative solutions that honor our roots and the next Seven Generations of earth stewards and water guardians to come.”