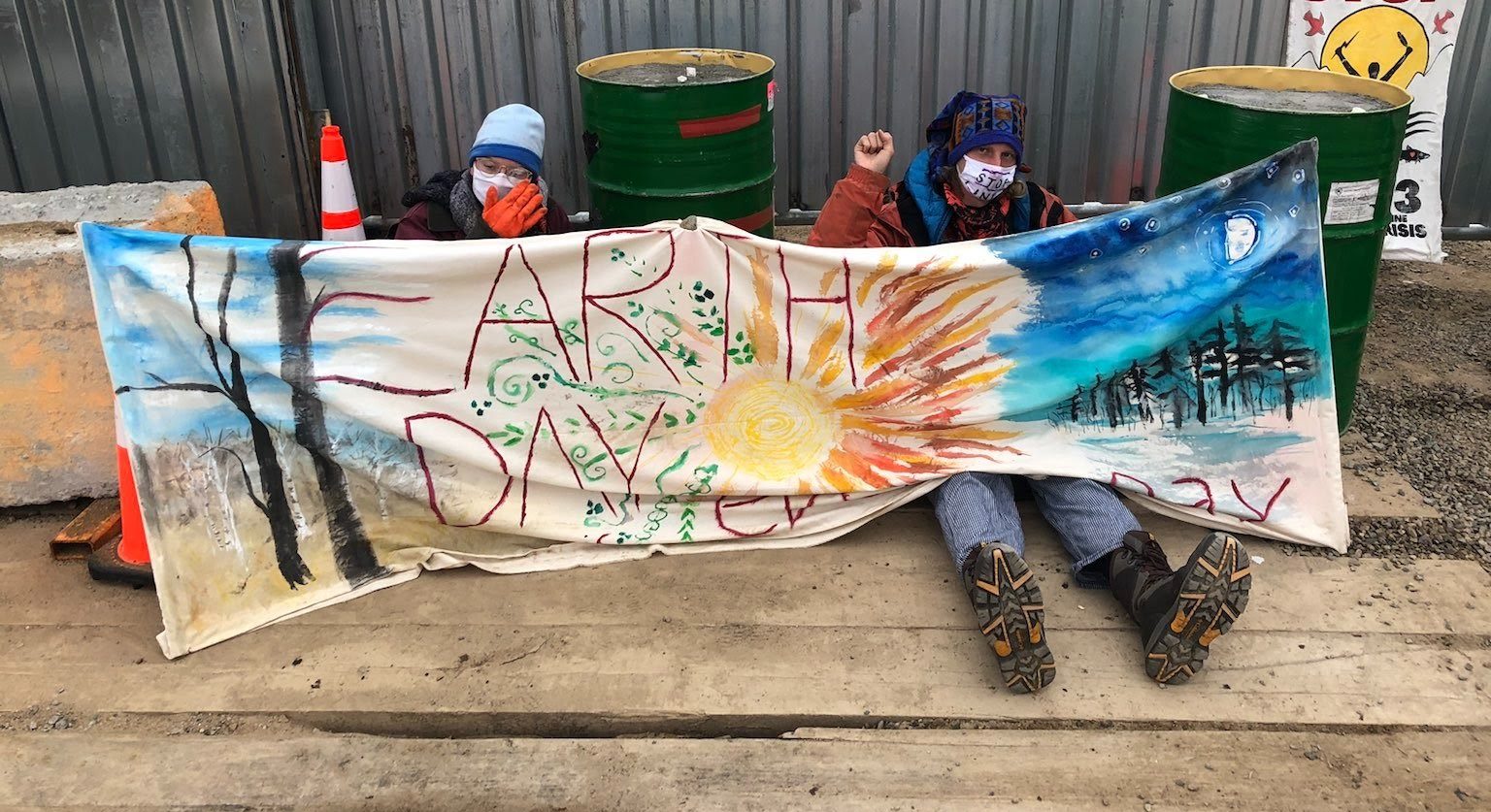 NOTE: Listen to this interview with Dawn Goodwin of the RISE Coalition on Clearing the FOG to learn more about the struggle to stop the Line 3 tar sands pipeline and how you can support it.   – MF

Hill City, MN – Early Friday morning, five water protectors locked themselves into concrete barrels at the entrance of Swatara oil pump station, halting construction of the Line 3 Replacement project. This action was taken with Camp Migizi in recognition of Earth Day, coming a day ahead of “Stop Line 3 x Earth Day”, a march that will be taking place in Duluth, Minnesota. Two of the protestors sat behind a hand painted banner reading “Earth Day Every Day”, while other banners in front of the pump station gate read “No Pipelines on Stolen Land,” “Land Back,” and “Protect the Water.”

Construction faces active and growing resistance led by Indigenous groups who see the project and the risk of a spill as a violation of treaty rights, as the project endangers wild rice lakes in treaty territories where the Anishinaabe have the right to hunt, fish, and gather. There have been over 250 arrests made since construction began in December 2020, making this the largest pipeline protest since Standing Rock.

One of the water protectors present at the action decried the construction of Line 3 for breaking treaties and desecrating the land. In their words, “What Enbridge is doing is perpetuating that colonial cycle of violence and disregard, until we are at a point where our waters do not flow, and our grasses wilt and die, and all we have in common are fires, floods, state surveillance, and the thin, decimated ozone hanging low above our heads.”

Groups resisting Line 3 in honor of Earth Day cite the ecological destruction that is being caused by the pipeline, particularly the project’s contribution to climate change. Oil from the tar sands is the world’s most carbon-intensive fuel, and the expanded Line 3 would release as much carbon as 50 new coal-fired power plants. Enbridge calls this construction a “replacement project”, omitting the fact that the new Line 3 pipeline would nearly double its capacity to carry oil, all but guaranteeing that our state would not meet its emissions reduction targets. The new route also goes through hundreds of acres of wetlands and over 200 bodies of water untouched by infrastructure projects.

This action was taken in recognition of the colonial violence and ecological destruction that is being caused by the construction of Line 3, and in honor of Earth Day. As one of the Water Protectors present said, “We take this stand today, to celebrate creation in the face of tyranny.”