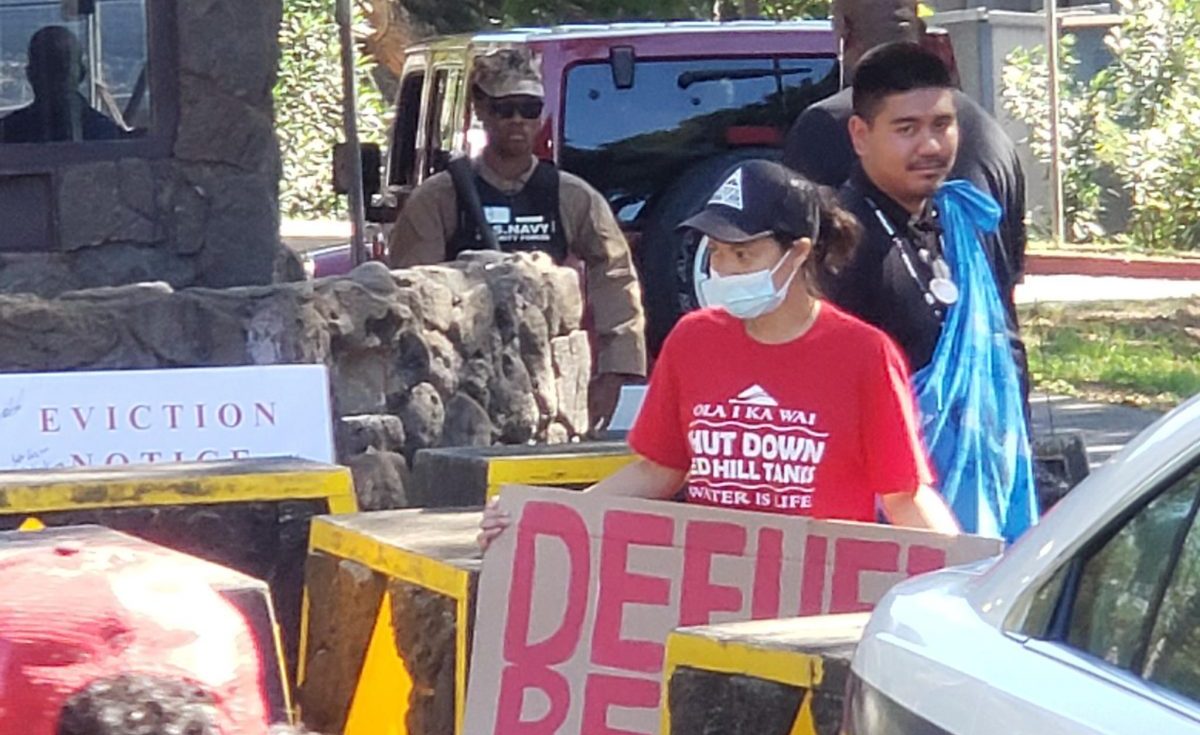 With no meaningful response to their demands for accountability and emergency action by the U.S. Navy one full year after a fuel spill poisoned Oʻahu’s aquifer and thousands of people, the community has had enough.

Puʻuloa, Hawaiʻi – On the anniversary of the 19,000 gallon fuel spill that led to the poisoning of Oʻahu’s sole source aquifer and thousands of families, water protectors from across the island presented an “eviction notice” to Navy leaders for numerous Navy and Department of Defense actions that have continually threatened and harmed the lands, waters, and people of of Hawaiʻi – including the Navy’s ongoing refusal to properly address the existential threat posed by the Red Hill Bulk Fuel Storage Facility.

“We aren’t dumb. We aren’t sheep. We know when we are just being fed lines by military officials in the hopes of keeping us quiet. We let them do that to us for too long, and look at what we’ve got. Those days are over, maybe forever,” stated Kainoa Azama, of the Oʻahu Water Protectors.

Prior to their presentation of the notice, water protectors gave out hundreds of ice pops and informational brochures to families shopping at the Navy Exchange. “First, people on the Navy’s water system need to be informed that there are still reports of ongoing health and contamination issues. They need to know that if they are experiencing health symptoms or observing issues with their tapwater, there are resources and networks out there who may be able to help,” said Wayne Tanaka, Sierra Club of Hawai‘i executive director. “Second, we want these families to understand – we are all connected. We all need water, we all want to protect what we love, and we all need to take care of each other as well as these islands we are blessed to live on, to call home. That is what today and the events this weekend are all about.” 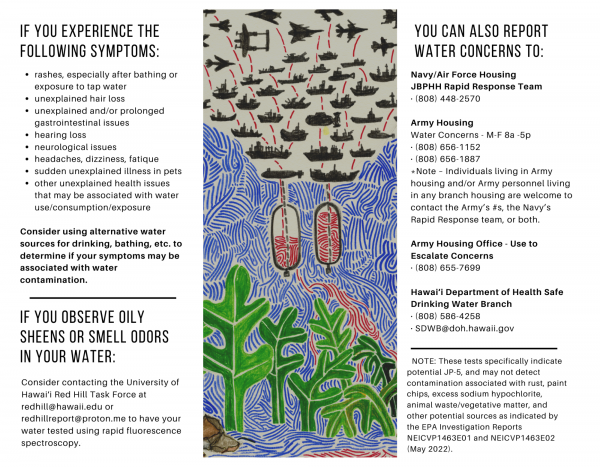 The eviction notice presented by the water protectors, representing numerous organizations in the Shut Down Red Hill Coalition, cited the following grounds for eviction:
● Navy officials’ lying under oath in legal proceedings concerning the Red Hill Facility;
● Prioritizing military and hypothetical war time objectives over the safety and security of ʻāina and people;
● Desecrating sites sacred to Kānaka Maoli; and
● The poisoning of wai and ʻāina, stolen from the Hawaiian Kingdom with the assistance of the U.S. Navy.

While the group had called upon INDOPACOM Admiral John Aquilino and Joint Task Force Commander Rear Admiral Wade to meet them at the Makalapa Gate entrance, neither official came forward.

“The buck stops at the top, and Rear Admiral Wade and Admiral Aquilino have done nothing to answer the call to meet with the people whose island, whose lives, and whose future remain in jeopardy,” reflected Janice Toma Shiira, of the Shimanchu Wai Protectors. “Why are they afraid of meeting us, face to face? Are they afraid that they can’t answer our questions? Or is there something else they are hiding?”

Participants then “served” the eviction notice to the gate guards at Pacific Fleet Command Headquarters.

Participants demonstrated that the concern for the health and future of the wai (water) under Kapūkakī (Red Hill) has not subsided. Sunday’s eviction action made it abundantly clear that community organizations, Kānaka Maoli leaders, and water drinkers across Hawaiʻi are far from backing down.