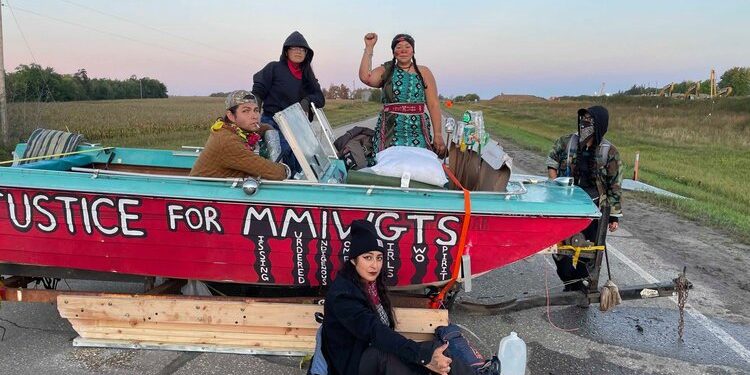 Clearbrook, MN – This morning, Water Protectors erected multiple blockades at a major U.S.-Canadian tar sands terminal in Clearbrook, Minnesota in direct opposition to Enbridge’s Line 3. From grandmothers to young people, Water Protectors of all walks of life continue to stand up for the sacred.

On one end of the mile-long blockade, grandmothers led beautiful solidarity with Anishinaabe treaty territory and Mother Earth, in front of a boat painted with MMIWG2S messages.

“We, elder women, stand in loving solidarity with our Indigenous relatives and all Water Protectors. 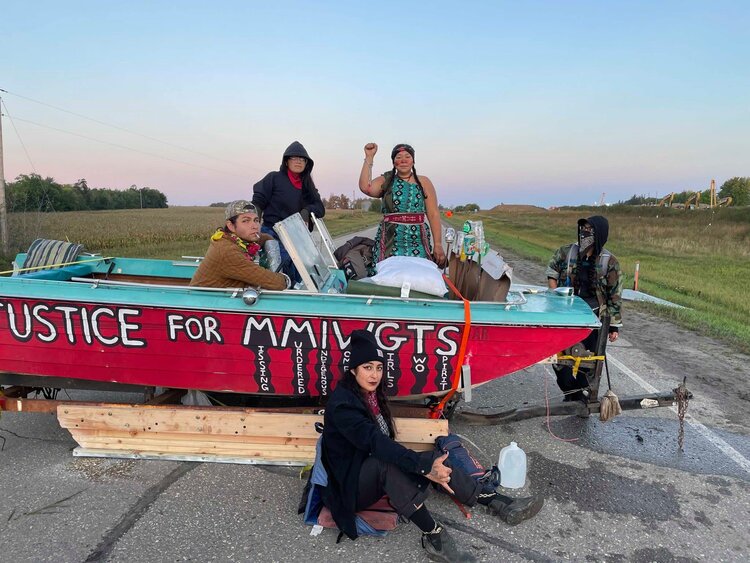 We say to the Enbridge corporation, its stockholders, all their workers and to President Biden: STOP THE LINE 3 PIPELINE NOW!

We are here out of love for future generations and all life on our beautiful MOTHER EARTH!” – Ridgley Fuller, Trish Gallagher, Ellen Graves, Rema Loeb, Priscilla Lynch, Paki Wieland

Second and third blockades of an overturned vehicle, concrete barrels, and a tripod held off the other access points to the tar sands terminal. The action follows a blockade of a Line 3 mancamp last week, which included an all-BIPOC, mostly Indigenous femme and two-spirit team of land defenders.

While the Biden and Walz administrations remain silent to police brutalization of Water Protectors, the multiple sex trafficking rings of Enbridge workers, and the huge impact of Line 3 on climate crisis, the people’s resistance continues.

Steven, an Indigenous Water Protector, said, “My ancestors fought and died for me to be here, so of course I’m going to continue that legacy.”

Wild ricing is underway in lakes that are nearly dry in many places, some Native people are turning to snow shoes to get into the beds and harvest the traditional food that has sustained the Anishinaabe for generations. Enbridge received permission from Minnesota to “dewater” 5 billion gallons of water to build Line 3, paying a $150 application fee.

Said Tara Houska for Giniw Collective, “We fight for the land and for those to come, as our ancestors did.”