Greenbrier County, WV — Early this morning, 3 water protectors locked themselves to 3 separate excavators at a Mountain Valley Pipeline site outside of Rainelle, WV. These 3 individuals prevented work at the site for over 3 hours, before being extracted and arrested just after 9 am. 1 additional supporter was arrested near the site while walking on a public road. Banners at the site read, “VIOLENCE AGAINST MOTHER EARTH IS VIOLENCE AGAINST OUR SISTERS” and “AIN’T SCARED. STILL FIGHTIN.” The 4 arrested individuals were charged with misdemeanors; bail was set between $500 – $2,500 for each person. All 4 have been released.

Cherri Foytlin, afro-Indigenous mother of 6 with Extinction Rebellion, explained: “A little under a year ago, while I was fighting to keep the Bayou Bridge Pipeline from crossing our land, I was attacked by someone who thought their threats and acts of violence would quiet my sensible demand for clean water for generations yet to come. I am here today to say: I will not fear cowardly men when it comes to protecting Unci Maka (our Grandmother Earth). As our planet boils, our children are caged, and our women are disappeared, we must accept that violence against the Earth is the same as violence used against our women and children. Therefore, in the name of all that is good, we have a moral obligation to halt the harm. This is why we cannot, and will not, stand down. Stop MVP!” 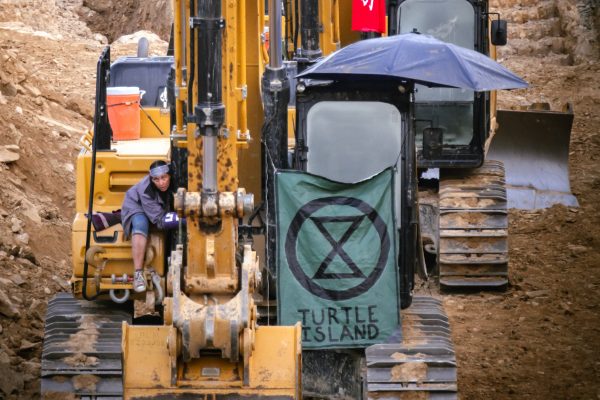 Mama Julz, Ogala Lakota, land defender, water protector, and founder of Mothers Against Meth Alliance, stated: “Today I’m here to bring awareness to the issues of man camps and their connection with the drugs and sex trafficking that leads to missing and murdered Indigenous women. These issues are really important to me because I fight meth, not only in my territory but in a lot of Indigenous territories across Turtle Island. Any time you desecrate Mother Earth, raping Mother Earth, it’s raping our sisters, too. It’s all one big connection, and that’s why we have this rise in our missing and murdered Indigenous relatives.”

“Man camps,” to which Mama Julz is referring, are housing complexes that provide accommodations for hundreds (often thousands) of temporary workers, commonly associated with the fossil fuel industry. They’re frequently seen in remote locations along pipeline construction routes and near oil and gas fields. In any small or rural community, a massive influx of transient men is a recipe for disaster. Man camps have a devastating impact on Indigenous communities in particular, where they contribute to a surge of substance abuse, sexual assault and other violent crimes, leading to a rise in the number of missing and murdered Indigenous women — a continuation of the lethal violence and abuse that European colonizers have imposed on Native women for hundreds of years.

Jim Steitz, a concerned citizen defending the future of our world, was the 3rd person locked down today.

Edith McKinley of Greenbrier County stated the following in support of today’s action: “I support the actions of those blocking the pipeline from further damaging our beloved mountains. I believe that the short term profits from said pipeline will benefit the few, while the permanent long term damage to the water supply will negatively affect many. The shoddy planning and execution of existing pipelines, with massive erosion and rupturing causing spills and contamination, is reason enough to stop further building.” 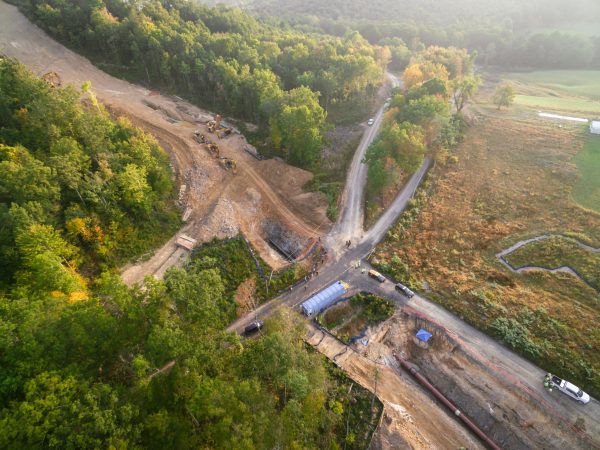 The Mountain Valley Pipeline is a 42-inch diameter, 300-plus mile, fracked gas pipeline that runs from northern West Virginia to southern Virginia, with a proposed 70-mile extension into North Carolina. The Mountain Valley Pipeline contributes to climate change, increases demand for natural gas (and as a result, fracking), and is entrenched in corrupt political processes. It endangers water, ecosystems, and communities along its route. Last month, 1 person died and several others were injured after an explosion of a 30-inch natural gas pipeline owned by Enbridge in rural Kentucky. The Mountain Valley Pipeline poses similar threats to those along its route, in addition to the risks posed by the construction process itself. From flipped excavators, to sinkholes opening up, to landslides, MVP continues to risk the lives of protesters, residents along the route, and even its own workers.

Meanwhile, the ongoing tree sit blockade near Elliston, VA — the Yellow Finch blockade — is currently in its 371st day of blocking MVP’s path.