Above Protester from the Makwa Initiative attaches himself to pipeline equipment. By Rob Wilson Photography 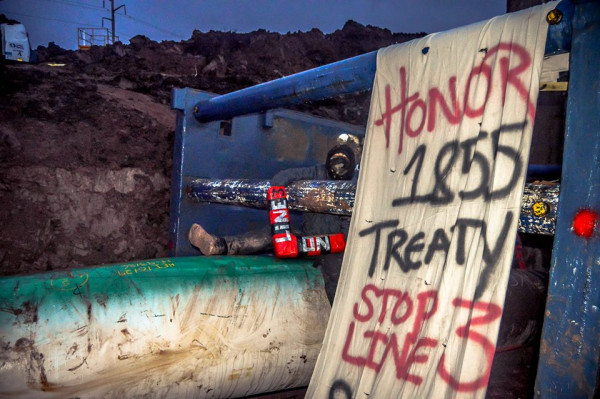 The project is estimated to carry almost one million barrels of tar sands oil from Alberta, Canada to Superior, Wisconsin; Enbridge has received approval in Wisconsin, but has not received approval in Minnesota, which would be the largest segment of the proposed project. The non-violent direct action came after evidentiary hearings in Minnesota, where Enbridge revealed that it had already paid for 100% of the pipe for the project, and has built several pipe storage yards across the state.

A water protector stated, “We have attended public hearings, marches, and rallies. At this point we feel like the only way we can make are voices heard is by locking our bodies to the equipment. The state has recorded our comments, catalogued them, and say they factor them into their decision on whether or not to permit the project. We want them to stop expanding tar sands infrastructure. We need to be thinking about our children’s futures.” 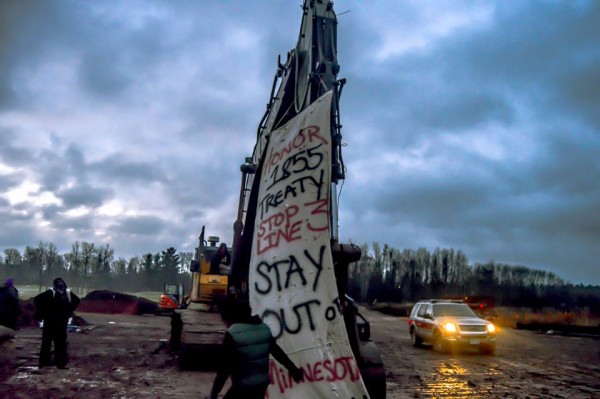 Makwa Initiative Banner: Honor the Treaty, Stay Out of Minnesota, at shut down by Robert Wilson Photography