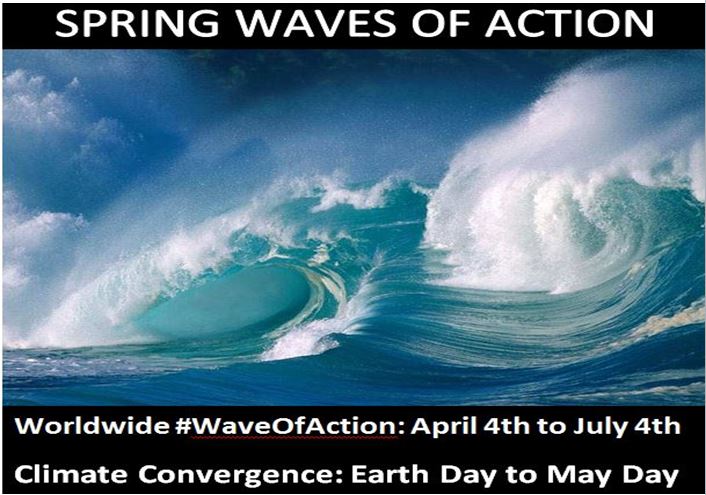 Every wave on the ocean that has ever risen up and refused to lay back down has been dashed on the shore, but it is the very purpose of a wave to rise up, because once it rises up above the horizon it finally has the perspective to see that it’s not just a wave, that it’s a part of a mighty ocean. And the sharpest rock on the wildest shore can never break that ocean apart; they can never wear that ocean down, because it’s the ocean that shapes the shore.

-Tim DeChristopher, March 3, 2011 after being convicted of falsely bidding on oil and gas leases to fight climate change. Video here.

A wave is an apt metaphor for a popular movement as movements do not grow in a consistent upward line, but grow and recede in waves of action. We certainly saw this with the current social movement that has roots which run more than a decade deep and had a nationwide “Take Off” with the wave of occupy encampments that rose up, coast-to-coast together.

Of course, like all waves, the encampment wave receded but that did not signal the end of the popular movement, it signaled another stage.  Since the encampment stage we have seen a wide array of movement actions. Some like Occupy Sandy took the occupy name in their mutual aid for victims of the massive storm Sandy as well as for their efforts in building a new economy in the affected communities. Others like Strike Debt, which came directly out of Occupy, took another name but continued to fight for the same values, challenging the debt-based economy. Some, like Fight For 15 and Our Walmart/ForRespect, arose after Occupy but fight for the same values of an equitable economy where workers can live in dignity, not in poverty and many involved in Occupy joined in.  And, the movement against extreme energy extraction and climate justice rose up, as seen in the campaigns against hydro-fracking, tar sands, mountain top removal, uranium mining and off-shore oil. These are a few examples of many of the waves of resistance that continue.

Popular Resistance grew out of many conversations and meetings with people in the Occupy movement from across the country as well as people involved in other social justice campaigns. We seek to provide the movement for social, economic and environmental justice with daily news and resources, as well as to help us see that we are a movement of movements. We support decentralized, bottom-up approaches to movement development as we see in the #WaveOfAction and the Global Climate Convergence.

At the beginning of the year we wrote the article “The Tasks of the Movement for 2014.” In the current stage of the movement our tasks are to deepen our political education and develop national consensus. Whether or not they rise to the level of the Occupy “Take-Off” stage, it is also important to continue to organize visible actions that express dissent.

From its first announcement we have supported the #WaveOfAction and encouraged participation. The #WaveOfAction extends from the day Rev. Dr. Martin Luther King, Jr. was assassinated to Independence Day.  The campaign will begin with candlelight vigils around the world at the time of MLK’s assassination, which was 7:05 pm EST on April 4th.

The #WaveOfAction is composed of local actions united by a common theme and a common strategy.  It is an opportunity for each of us to reach out to workers, students, local businesses and others to let them know what the movement stands for and why we are doing what we are doing. It is an opportunity for us to fly the flag of the popular movement that is growing so the public can see people taking action and can get involved.

And, the decentralized format allows for people across the country and around the world to develop actions that are most effective for their communities.  Throughout the three month campaign people will be sharing their actions and their experiences so it will be an opportunity for us to learn from each other and emulate what has been most effective.

It is also an opportunity to show the range of issues of concern, from climate justice to worker justice to ending mass incarceration and creating a fair economy. While each of these sub-movements is important in itself, the reality is we are all challenged by the same ‘rule of money’ that prevents the systemic and transformative change that is needed.

If you have been following #WaveOfAction online you can see there is a lot of activity in social media. All sorts of graphics and memes as well as videos have been produced to promote the campaign. Its Facebook page is located here.

One of the beautiful things about this decentralized, non-hierarchical effort is that it is impossible for anyone to predict what will happen. While there is a list of actions on the #WaveOfAction website to get people started, the hope is that once this gets going, it develops an unpredictable life of its own.  As stated on the homepage of the website: “This crowdsourced campaign will become what you, the people, make of it, self-organizing and organically evolving, a new culture will emerge. What are you most passionate about?”

By expanding our ongoing protests, resistance and creation of the world we want to see during this time period and acting under a common banner of the #WaveOfAction people will see that rather than shrinking, as the media would like people to believe, the popular movement for social, economic and environmental justice is actually growing.

The Convergence: Earth Day to May Day

In the midst of #WaveOfAction is the Global Climate Convergence for People, Planet and Peace over Profit, an education and direct action campaign beginning this spring with “10 days to change course.” This campaign also seeks to connect issues and urges people to take actions throughout the country and world at a local level, in their own ways.

The Global Climate Convergence seeks to redefine Earth Day from the sanitized version that leads people to believe that we can plant trees to solve our environmental crisis to the more realistic version which shows that the problem is more deeply rooted in an economic system that exploits people and the planet. It also seeks to raise the level of concern about the urgency of the climate crisis and show that it is related to all of the issues of concern such as health, food and water, jobs, housing, immigration, war and poverty. The Convergence encourages “coordinated action and collaboration across fronts of struggle and national borders.”

Yeb Saño, the Phillipines’ delegate to international climate negotiations is holding a climate fast during the Earth Day to May Day 2014. North Carolina Climate Action is joining the fast and others are invited to join. Whether you are able to sign up to fast for ten days, three days or even one day, please join in this global action. As Mr. Saño says: “Fasting for the climate is one such fast that we embark on to confront the planetary crisis, to correct the injustices and inequities of history.”

The climate disaster is a central organizing focal point of the Global Climate Convergence. Recent reports have becoming increasingly alarming about the impact that climate change will have on the planet. The dysfunction of government, corrupted by oil, coal, gas and nuclear energy interests, makes it urgent for the people to take collaborative and unified action.

The slogan “People, Planet, and Peace over Profit” summarizes the call for social, economic, and environmental justice.  A key point that the Global Climate Convergence seeks to make is that “these goals should be prioritized over the narrow corporate interests that have come to dominate our public policy, economy and society.”

What Historic Moments Lie Ahead?

These are exciting times in the popular movement for social, economic and environmental justice.  Events in southern Europe are once again heating up with mass protests and there are protests in multiple countries.  Just as Occupy in the US followed the Arab Spring and European Indignado movement, once again the US may be following the world with an escalation of protest here.

And, the fragility of the US economy is evident with multiple economists and investors seeing a likely crash of the stock market.  This would not be surprising since the market is inflated way beyond the strength of the underlying economy. It has been inflated by the Federal Reserve’s Qualitative Easing program which has given hundreds of billions to banks which they have used for investment; that program is now shrinking.  At the same time the other big source of cash in the international economy, China is beginning to invest more inside its borders rather than outside. As the social movement is building over the next few months, it could coincide with major new problems in the US economy.

A key environmental issue, the KXL pipeline, is also reaching a breaking point at the same time that the US is seeing more oil spills from pipeline bursts, train crashes and off-shore accidents. And, the impact of Fukushima is hitting US shores with contaminated water while the Japanese energy company continues the high-risk activities that could expand the environmental crisis at any moment.  Environmental justice activists see the need for an escalation of their protests against extreme energy extraction. Our demand is crystallizing – end extreme energy extraction and the ‘all of the above’ energy strategy and demand the United States become carbon-free and nuclear-free by 2030.

The exaggerated rhetoric in the US media and by propagandistic politicians around the Ukraine, Venezuela and China show a heating up of US Empire. During the next few months there are serious hot spots that could burst into flames.

This is the reality of our times: the world is facing multiple crises at the same time. As the popular movement intentionally escalates its actions, we will be in position to highlight these crises and to quickly escalate further if events occur that create an opportunity for rapid growth. These are times that demand each of us to step up and do more. The opportunities for rapid growth of the social movement created by the dysfunction of the rule- by-money-government  are increasing in ways we can only imagine.

Sign up for the daily news digest of Popular Resistance, here.

Kevin Zeese, JD and Margaret Flowers, MD are participants in PopularResistance.org; they co-direct It’s Our Economy and co-host Clearing the FOG. Their twitters are @KBZeese and MFlowers8.