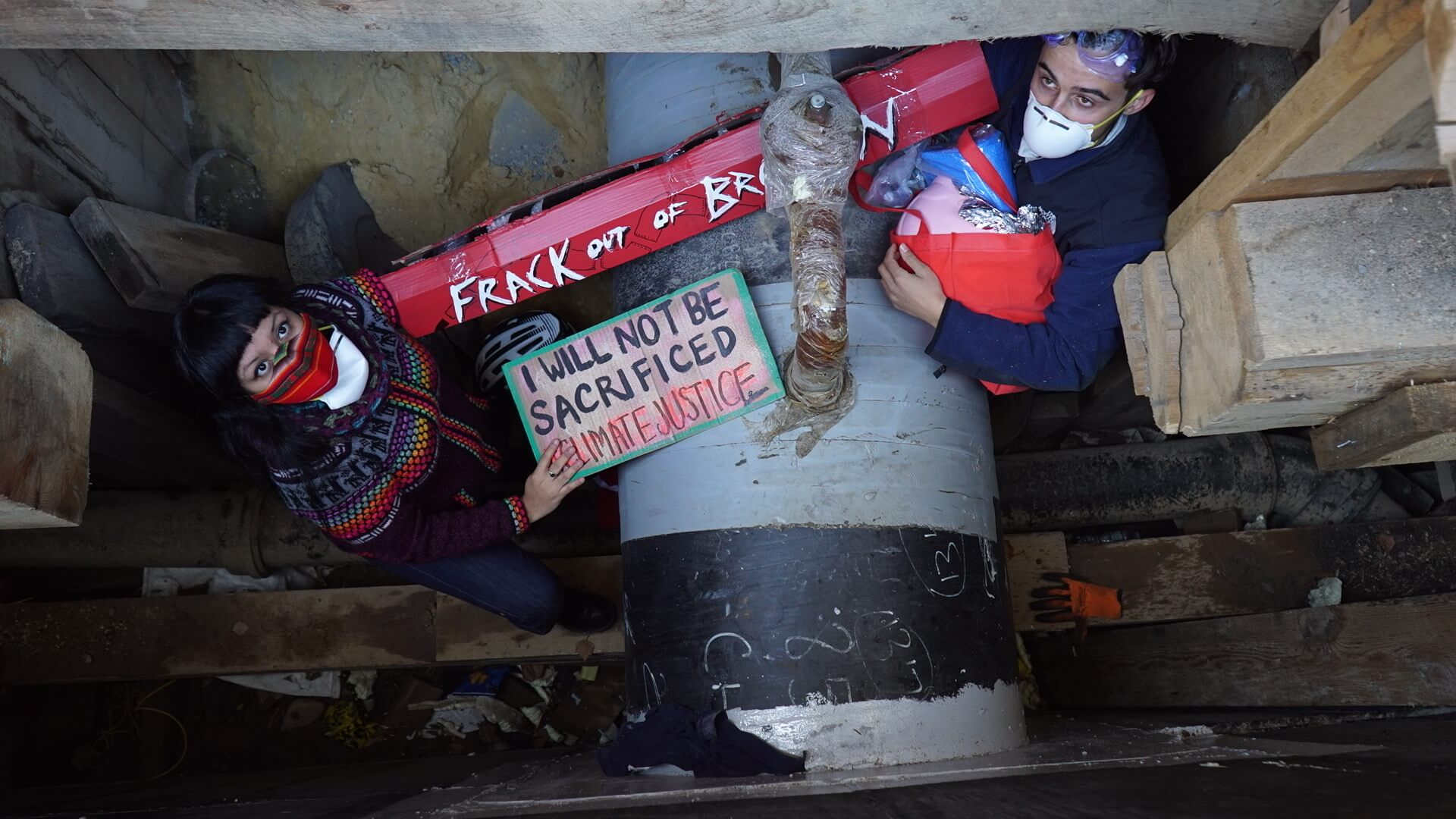 Way Down In The Hole: Pipeline Lockdown

Above photo: Protesters Pati Rodriguez (left) and Benny Woodard locked themselves to a National Grid pipe in protest on Oct. 15. Lisette DeJesus.

Protestors lock themselves to National Grid pipeline in Williamsburg.

Two environmental advocates fastened each other to the underground tube for three hours while two more activists secured themselves to the active building site at the corner of Manhattan and Montrose avenues at around 9 am, protesting the utility company’s seven-mile fossil fuel pipe.

“They don’t care about us. They never asked for our consent to come in here so we need to stop it because no politician is doing it for us,” said Pati Rodriguez, who linked herself with a makeshift cardboard pipe to the pipeline with fellow protester Benny Woodard on Oct. 15.

About 30 protesters with groups like the No North Brooklyn Pipeline Coalition and Frack Outta Brooklyn cheered on the subterranean stunt as dozens of cops with the Special Operations and Technical Assistance Response units showed up and cordoned off the block.

The demonstrators live-streamed their underground action, while another protester held a dance session above the construction site.

Just before noon, police went down and hoisted them out, cuffing the duo along with the two other protesters who were locked against the construction fence — including local Council candidate Lincoln Restler.

We are occupying @nonbkpipeline today. Join us at Manhattan and Montrose with #FrackOutBk.

We together must stop this pipeline. No more fossil fuel infrastructure. pic.twitter.com/av1Z7MX01L

A view from inside pic.twitter.com/f1cqgaIkdC

Protests against the four-year infrastructure project have been heating up as the company wraps up construction at the conduit’s northern end at the Newtown Creek — leaving activists worried the utility company will start running liquified natural gas as soon as next week.

A mayoral spokeswoman at the time declined to say whether de Blasio would veto or withdraw any fossil fuel permits for National Grid, saying only that City Hall was “reviewing” the pipeline expansion against the backdrop of an ongoing state rate hike case for the utility.

National Grid started the scheme — officially dubbed the Metropolitan Natural Gas Reliability Project — back in 2017 with the sign-off from the state, tearing up the streets along its seven-mile route beginning in Brownsville and continuing through Bedford-Stuyvesant, Bushwick, and East Williamsburg, before its final destination which will connect to the company’s Maspeth Avenue depot at Newtown Creek sometime in 2021.

The company in April 2019 applied for permission with the state’s Public Service Commission to raise an additional $286.2 million in annual gas delivery revenues by March 2021 coming from an average monthly residential heating bill increase of $16.66 for its Kings County customers, according to public filings, and activists claim the company is trying to unload the costs of the pipeline on rate payers.

Opponents of the project have railed against the project since January, when activists and Community Board 1 members blasted Nat Grid reps presenting the proposal to the civic panel at a heated meeting. Protesters previously disrupted a construction site nearby in February at Manhattan Avenue and Moore Street.

The company claims they reached out to locals about the project and they provide construction updates online every two weeks, but residents said were blindsided by crews tearing up their streets for years on end, including one Williamsburg woman, who watched the Thursday protest from the sidelines.

“I walk through here all the time — I live three blocks down — I had no idea what they were doing,” said Carol Rose. “The fact that they’re doing that is very sneaky and they didn’t make the people in the neighborhood aware of it is kind of shady.”

In a statement Thursday evening, National Grid’s president for New York denounced activists for putting workers and themselves in danger by breaking into an active work site for the second time.

“Today’s work zone breach was an unfortunate and truly dangerous action and should not happen again,” said John Bruckner. “The safety of our employees and the communities we serve is the top priority at National Grid… Work zone safety is a matter of life and death.”

The missive continued by saying that the project does not bring any additional gas to New York, but rather makes the existing grid more efficient and “alleviates network constraints.”

“It’s like adding an extra lane to a very busy road to help reduce traffic congestion,” reads the note.

Kevin Duggan hails from the distant shores of Ireland and Switzerland. He covers northern and brownstone Brooklyn neighborhoods, with a special focus on transit.