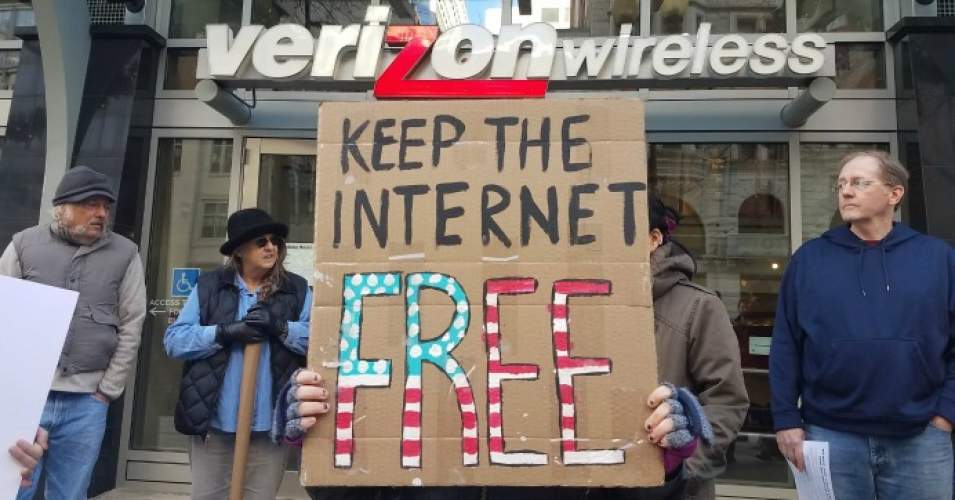 We Already Knew Broadband Should Be A Public Utility

Above photo: Protesters demonstrated outside Verizon stores across the country on Thursday, Dec. 7 to denounce the plan by Federal Communications Commission Chairman Ajit Pai to turn over control of the internet to major service providers. shauna gm/Twitter.

The Pandemic Made It Obvious.

Broadband allows people to participate in the digital world, which encompasses our daily lives. It connects people with their families and friends, news on what is happening in the country and abroad, and gives access to an unlimited amount of important information and resources. During the COVID-19 pandemic, broadband has been critical in supporting online school and work, access to healthcare and medical information, and even vaccine distribution. Eighty-seven percent of people reported that the internet has been important to them during the outbreak, and fifty-three percent of people reported that broadband is essential for critical purposes and everyday tasks.

If broadband is so essential, then why doesn’t current federal policy enable the Federal Communications Commission to regulate broadband as we regulate other public utilities — similar to the way we treat electricity, water, and phones? Why can’t the FCC do things like ensure broadband affordability, prevent bill shock, require networks to be resilient, and prevent carriers from decommissioning older networks without replacing them? Below I’ll dive into some details behind broadband classification, explain why broadband should be considered a utility, and lay out what needs to happen to make that a reality.

What Is a Utility?

First, an important point: If you’ve followed our work or this topic in the past, you are likely familiar with net neutrality. It’s important to clarify that when we talk about Title II of the Communications Act, we aren’t just talking about net neutrality. “Title II” has become part of mainstream conversation as part of the long-lasting fight for net neutrality. But that fight is about whether broadband should be a common carrier, which is an economic regulation that requires a provider of services to serve all customers and to treat all classes of similar customers the same. Net neutrality rules are a form of common carriage, which can exist without something being a public utility.

But there’s more to Title II! Reclassifying broadband as a “telecommunications service” under Title II would give the FCC authority to regulate broadband in more similar ways to public utility regulation. Treating something as a utility means that the service is so essential that the government has a responsibility to ensure that, one way or another, everyone has fair, reasonable, and affordable access. Utility regulations typically allow a number of features necessary for broadband, such as universal affordable access and service quality.

What Does That Mean for Broadband?

The reality is, the public overwhelmingly agrees that broadband is essential and should be treated as a utility. A recent study from Consumer Reports found that eighty percent of people believe that broadband is as important as water and electricity. Even Congress recognized this, with its recent passing of the Coronavirus Aid, Relief, and Economic Security (CARES) Act, which includes internet access as a utility, stating “the term ‘covered utility payment’ means payment for a service for the distribution of electricity, gas, water, transportation, telephone, or internet access for which service began before February 15, 2020.”

The necessity for broadband is overwhelmingly clear. Title II classification means the FCC can enforce measures for network resiliency, reliable backup power, blackout prevention, network replacement, and more to ensure we are prepared for emergencies. There are countless examples of the need for this, from the California wildfires in 2020, to AT&T’s recent decision to cut national DSL broadband services, to the winter storm in Texas that left millions without internet.

Title II would mean the FCC can work towards universal service, and prevent digital redlining that leaves marginalized communities with slower and more expensive access than those in higher-income neighborhoods. This is fundamental for so many facets of our society, from students hit hard by the digital divide, to workers who are increasingly encouraged or required to use internet at home, to small businesses trying to reach new customers.

Title II would also create guarantees for affordability, consumer protection, and service quality, which are fundamental in a society with the most expensive broadband in the world, where people are regularly accessing healthcare and critical information online. Without question, utility regulation means more equitable access. And the nature of broadband calls for it.

In the short-term, the FCC needs to immediately reclassify broadband as a Title II telecommunications service. This will give it the necessary legal authority to protect consumers against abuses by internet service providers, including preventing unfair data caps and communications shut-offs, ensuring net neutrality and network reliability, and enforcing universal service programs and expanded affordability.

In the long-term, the public utility status means we must ensure affordable access. Broadband is too essential to leave its adoption up to personal circumstance. That’s why we’ve called on Congress to provide a $50-per-month subsidy to low-income families for broadband access. We’ve seen acknowledgement of the importance of a subsidy from Congress and the FCC via the recent Emergency Broadband Benefits program, which provides a short-term $50-per-month subsidy for the pandemic. (The existing FCC Lifeline program only provides $9.25-per-month for broadband access for low-income Americans, which is simply not enough to support the connections families need.)

Broadband access shouldn’t be a luxury. It’s essential to communicate and function in this digital age. It’s time to treat it as the public utility it clearly is, and reclassify it under Title II. Then, it’s time to ensure affordability by providing a reasonable subsidy for those in need.

We’ve seen what happens when it’s not treated as a public utility: consumers are at the mercy of ISPs for availability and price, as ISPs are incentivized to put profit before the public interest. It’s clearer now than ever how important high-speed internet access is necessary. It’s time to take the steps towards fair and reasonable access for all.