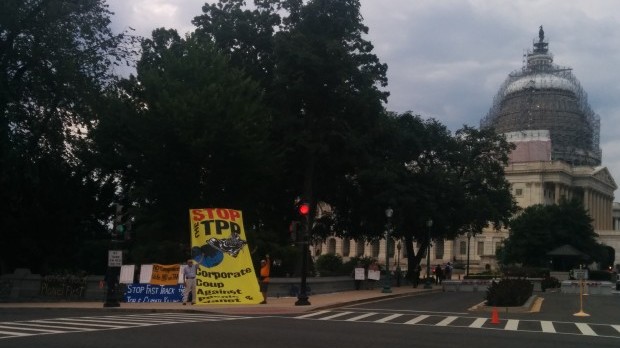 We Are Greater Than The Fracked Gas Lobby

All photos by Lee Stewart

Washington, DC – The dome was encased in a rigid web of scaffolding as I rushed by. Looking up at it on my way to the corner of Independence Avenue and New Jersey Avenue SE, I saw a country trying to hide a fatal illness. It’s beyond repair, I mumbled to myself, thinking about the deep underlying rot I see everywhere I look.

Walking in the shadow of the Capitol Building in the day’s rising heat, my ears were still ringing. Made uneasy by the inadequate yet intensifying public scrutiny faced by the Federal Energy Regulatory Commission (FERC), the captive government agency that receives its funding from the very industry it purports to regulate, the rule-makers there no longer allow its outspoken critics inside the room where monthly public meetings are held. Instead, we’re relegated to an overflow room where we have to watch the meeting’s proceedings on a screen. That’s where I’d just come from.

I wasn’t discouraged to be in the overflow room, though, because I already knew such meetings meant little anyway. Not only is public comment not allowed, but matters are decided on by the FERC commissioners in difficult to discern code. From the screen inside the overflow room, I heard the secretary read what would be voted on.

The only sensical sound that could be heard at FERC that morning was the sound of three screeching whistles that Ted Glick, Steve Norris, and I sounded in protest as we walked through the lobby and out of the building, mischief managed, but change left as yet unmade.

I thought about the fracking pipeline, compressor station, and export terminal permits that are rolling in like waves during a storm, all thanks, in part, to FERC’s rubber-stamp. What will it take to stop this onslaught, I wondered. Those at the levers of this crisis seem blind to reality.

Arriving at the corner of Independence and New Jersey, and joining almost two dozen others who were gathered with signs and banners directed at members of the House of Representatives, we learned the House was only an hour away from voting on a bill that would help corporate power grabs like the secretly negotiated Trans-Pacific Partnership (TPP) pass through Congress. Known as Fast Track, this piece of legislation would make it so Congress could only vote such “free-trade laws” up or down with no amendments, no filibuster, and little time for debate.

“Vote no on fast track,” a friend shouted to a passing Representative on his way to the debate.

Watching the Representatives walk back and forth from the Capitol Building and the House offices, it struck me how insulated they were, surrounded by donors and lobbyists, seeing little of the direct impacts of the decisions they made. What about communities that stood to be hurt by fracking? Why would their Representatives give corporate interests primacy over their own? Perhaps it’s because they’ve been blinded. That’s certainly the case with FERC and their blatant insulation from the public. The big question for me is how to break through those blinders?

Before the Fast Track vote came, five of us, all members of Beyond Extreme Energy (BXE), a coalition of citizens and allied community groups fighting to stop new fracked gas permits at FERC, headed over to the Rayburn House Office Building where we had signed up to attend the Natural Gas Roundtable Luncheon. Congressman Tom Reed (R- NY), Congressman Jim Costa (D- CA), Congressman Gene Greene (D- TX), and Congressman Glen Thompson (R- PA) were slated to speak, all co-chairs of the Congressional Natural Gas Caucus, the caucus focused on promoting fracked gas in the House and among members of the public. We were going to gather intelligence on what was being said on the inside, but also to speak out and make our opposition to fracked gas infrastructure known.

It was inside the banquet room, sitting at a table watching the lobbyist file in, that I received a text about Fast Track from someone following the votes outside. “In case you haven’t heard yet, we’re doomed,” it said. Fast Track was going to pass in the House. My heart dropped. I thought of the dome, the construction, the rot, and the whistles.

I glanced around the room, reading some of the name tags. A representative from FERC. Someone from Spectra Energy, the Fortune 500 Company that builds and operates gas pipelines and storage facilities all around the country. ANGA, American’s Natural Gas Alliance. And many others.

No wonder Fast Track was going to pass, I thought. This was the kind of world our so-called Representatives lived in. Just like FERC, these people were insulated from the outside, surrounded by the industry, and effectively held captive to it.

Congressman Green spoke first, and Ted Glick of BXE delivered his uninvited speech directly afterwards. Ted’s focus was the release of the Pope’s encyclical about the realities of human-induced climate change and the moral imperative to act on it. The room seemed uncomfortable but determined to brush off his words. Ted sat down and the luncheon continued.

Congressman Reed spoke second. He spoke of a farm family he knew in Pennsylvania. The farmer’s daughter was opposed to fracking, Reed said. The farmer decided to have a fracking well built on his property anyway. He did it, Reed explained, because he would be able to use the money he earned from fracking to pay for his daughter’s college education. It was a tragic story that highlighted a grave ignorance to the realities of the climate crisis, not to mention the other negative health impacts of fracking.

When Reed told the crowd that fracking helps future generations, I felt words involuntarily escape from my lips.

“Fracking kills future generations,” I shouted, much to the room’s displeasure.

Before I knew it, a police officer was by my side, pulling my arm to remove me from the room. Once again, the insulation of those at the levers of destruction was being protected. Knowing it wouldn’t do much good to walk out quietly, I let my body go limp and shouted to the room as three officers carried me out. At one point, I remember calling those in the room criminals, because that’s what I believe they are.

I was disappointed not to hear the hard-hitting questions asked of the speakers by fellow Beyond Extreme Energy members after my removal.  I later heard their questions about drought and climate change were not answered in a straightforward way.

As I sat in a holding cell an hour later and thoughts of the day raced through my mind, I was reminded that it’s going to take a whole lot more than a few individual disruptions to stop permits at FERC, or to stop corporate power grabs like the TPP, or to neutralize the power and influence of the fracked gas lobby on our supposed representatives. Such disruptions and appeals seem to do nothing when the system is set up to be non-responsive. Nor do I think any one of these endeavors, a few among many, can be achieved alone in isolated campaigns. Each one rests on a rotting system that if not dismantled and replaced as a whole, will leave us with a threatened existence.

If FERC stops issuing permits, for example, what of the power of the fracked gas lobby? And what good is delivering a message to Congress, however disruptive, if Congress is set up to operate in the interests of the industry? The same can be asked of FERC.

The time has come to rise up and displace the harmful machine that grinds on around us.  I can’t see how that can be done if a whole lot more of us aren’t willing to sacrifice our freedom in the process, and maybe even our lives. Perhaps the unresponsive institutions around us make us feel alone. Maybe if that illusion is cracked, more will be willing to take action.

Lee Stewart is an organizer with Beyond Extreme Energy and Popular Resistance.