We Are Not Fooled By The Hong Kong Protests

Update: Protests continued in Hong Kong this weekend. The protesters returned to the use of violence and the police responded. The South China Morning Post reported: “In a now familiar pattern, the protesters threw bricks, petrol bombs, corrosive liquid and other projectiles at the police, who responded with tear gas, pepper balls and sponge grenades. Twenty-eight people were arrested, including an organiser of an approved protest march. At least 10 people were hospitalised, including two men in serious condition.”

Some people in the United States are confused about the protests going on in Hong Kong. Whenever the corporate media and politicians, especially people like Marco Rubio, applaud a social movement, it is a red flag that the protests are not a progressive people’s movement, but serve other purposes.  Is this really a democracy movement? Are workers protesting the deep inequality and exploitation there? If not, what are these protests really about?

Fortunately, a more complete narrative of what is happening in Hong Kong and how it relates to the geopolitical conflict between the United States and China is developing among independent and movement media. The following is a description of what has been learned recently.

Hong Kong Protests: Not a Democracy Movement, but an Anti-China Tool

What is happening in Hong Kong is not actually a people’s uprising for democracy, but a tool for anti-China rhetoric and “Great Power Conflict.” Many Hong Kong protesters are pro-capitalist and racist in nature, referring to mainland Chinese as locusts, and are calling for the United States to intervene. Many of the same tactics employed by Venezuelan, Nicaraguan, and Ukrainian regime change operations are re-appearing in Hong Kong. For example, demonstrators have used violence as a tactic to entice police to respond with violence in order to put out a false narrative of state repression against them.

Fight Back News describes the problem: “There’s a tendency among progressives in the United States to support big crowds of people protesting in other countries. No doubt, the corporate media assists in this process by labeling certain movements ‘pro-democracy’ or ‘freedom fighters.’”

Just because there are people in the street does not make protests progressive, worker-based or for the people’s interests. Fight Back News reports how Hong Kong has been used by China as a way to attract foreign investment, but also as a way to make the Renminbi (RMB) a more powerful currency as well as to advance China’s Belt & Road initiative. These are major threats to US dominance. 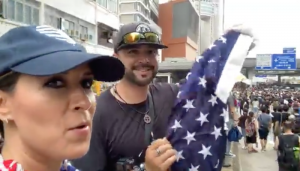 Dan Cohen of the Grayzone mentions the ties between the protest movement and right-wing racist groups in the US. This is an issue requiring further reporting as it is strange that pro-Trump, racist groups are supporting the protests and the protesters are using US racist symbols.

Cohen’s major focus is the capitalist ties of the Hong Kong protesters. He describes the Rubert Murdoch of Hong Kong, Jimmy Lai, the self-described “head of opposition media,” who has been spending a lot of money, millions, to build the movement and giving a lot of media time to the anti-China rhetoric. And, he shows the connections between these capitalists and the Trump administration, i.e. he has had meetings with Bolton, Pence, and Pompeo as well as with neocons in the Senate, Marco Rubio, and Tom Cotton.

The goal of the Hong Kong protests is only unclear because they are trying to hide their true purpose. The real goal is preventing the full integration of Hong Kong into China in 2047 when the transition agreement between China and the United Kingdom is finished. The United States, the United Kingdom, and billionaires in Hong Kong want it to be integrated into the western capitalist economy and fear China’s state-planned economy. If they succeed, Hong Kong will become a base of economic, military and political operations for the US at the Chinese border, a critical position for the West’s ‘Great Power Conflict’ with Russia and China.

The US is investing in an anti-China movement to make integration of Hong Kong into China difficult. China is already hedging its bets by building Shenzhen across the bay, a state-planned, market-based economy, which will become an alternative to Hong Kong and shrink Hong Kong’s importance. The people of Hong Kong will be the losers if this occurs.

The Hong Kong Protest Is Not A Working-Class Revolt

Even though there are good reasons for workers in Hong Kong to revolt, these protests are not focused on the issues of economic insecurity, i.e. high levels of poverty, the exorbitant cost of housing, low wages, and long hours. As Sara Flounders writes, “For the last 10 years wages have been stagnant in Hong Kong while rents have increased 300 percent; it is the most expensive city in the world.”

If the protesters were focused on workers rights, they would be demanding an end to, or at least reform of, the neoliberal capitalism of Hong Kong that is dominated by big financial interests and corruption. In fact, half of the seats in the legislature are set aside for business interests who vote to protect their profits and not basic needs such as housing, but there is no criticism of this by the protesters.

In Popular Resistance, we wrote: “Hong Kong has the world’s highest rents, a widening wealth gap and a poverty rate of 20 percent.” These are crisis-level problems for the vast majority of people in Hong Kong, but they were not the focus of the protests.

Fight Back News writes: “In actuality, the protests in Hong Kong serve the interests of finance capital, both in the city itself and around the world,” and makes the important point that “Hong Kong’s working class has nothing to gain from worse relations with mainland China, much less from ‘independence.’ They suffered greatly under British colonial rule – no minimum wage laws; no labor protections; barbaric legal punishments like flogging and more.”

The NED has spent millions of dollars to build this anti-China movement over the years in a place with a population of 7.3 million people, over a million fewer people than New York City. The first to report on NED involvement in the current protest was  Alexander Rubinstein of Mintpress News, who wrote: “the coalition cited by Hong Kong media, including the South China Morning Post and the Hong Kong Free Press, as organizers of the anti-extradition law demonstrations is called the Civil Human Rights Front. That organization’s website lists the NED-funded HKHRM [Human Rights Monitor], Hong Kong Confederation of Trade Unions, the Hong Kong Journalists Association, the Civic Party, the Labour Party, and the Democratic Party as members of the coalition.” HKHRM alone received more than $1.9 million in funds from the NED between 1995 and 2013.

The Viable Opposition blogger, in How Washington is Meddling In the Affairs of Hong Kong, describes NED’s history as a regime change agent for the United States and the recent NED funding in Hong Kong, pointing to a total of $1,357,974 on grants to organizations described as promoting freedom, democracy and human rights in Hong Kong over the period from 2015 to 2018.

This is not short-term funding but a long-term commitment by the United States.  NED has been doing mass funding in Hong Kong since 1996. In 2012, NED invested $460,000 through its National Democratic Institute, to build the anti-China movement (aka pro-democracy movement), particularly among university students. Two years later, the mass protests of Occupy Central occurred.

Sara Flounders points out US funding goes beyond NED, writing: “Funding from the NED, the Ford, Rockefeller, Soros and numerous other corporate foundations, Christian churches of every denomination, and generous British funding, is behind this hostile, subversive network orchestrating the Hong Kong protests.” The US-funding of NGO’s confuses political activists, media and commentators because they fund a myriad of NGO’s in Hong Kong. As a result, there are human rights, democracy, youth and other Hong Kong spokespersons whose NED funding is not disclosed when they talk in the media. 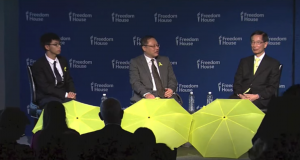 Hong Kong protesters are not always secret about their ties to the US. In 2014, Mintpress News exposed US involvement in Occupy Central. They pointed out that Martin Lee, a Hong Kong protest figure, was in bed with NED. They gave him an award and had his bio on their website. He came to Washington, DC in 2014 along with Anson Chan, another protest figure, and met with Vice President Joe Biden and Rep. Nancy Pelosi (D-CA).  Lee took part in a NED talk hosted specifically for him. In 2015, Lee and others were applauded for their leadership by Freedom House, which, as the now-deceased Robert Parry described in 2017, works hand in hand with the NED.

In this Popular Resistance story, we point out that during the current protests, participants were meeting with Julie Eadeh, of the US Consulate at a hotel. And, when Nathan Law and Agnes Chow visited the US they met with the China-hawk Chairman of the House Foreign Affairs Committee Rep. Eliot Engel. They also met with Vice President Pence, Secretary of State Pompeo, National Security Adviser John Bolton, and Senator Marco Rubio.

Protesters carry US and UK flags, and sing the Stars and Stripes Forever and the US national anthem, displaying their connection to western nations. In one of the most iconic moments, demonstrating how these protests are really a microcosm of the conflict between the US and China, a protester used a US flag to beat a Chinese reporter, Fu Guohao of Global Times, who was tied up and assaulted at the Hong Kong airport.

Some believe the protests are too big for the US to control and point to the amount of money being spent by the NED. If the populations of Hong Kong and the US are compared, $1 million in funding for the movement in Hong Kong is equivalent to $60 million in the US. Additional funds are also being provided by billionaires. That level of resources is gigantic for popular movements that typically run on shoestring budgets.

The only way not to see US involvement in the Hong Kong protests is to close your eyes, ears, and mind and pretend it does not exist.

Although Western backing and political ambitions are the reality, it is a challenge to get this narrative out more widely. Too many in the US are confused by the messaging coming from the Hong Kong billionaires, NED-funded NGO’s, bi-partisan politicians in DC and the military-intelligence establishment, all made larger by the corporate mass media.

Corporate powers are banning social media accounts and YouTube Channels from China to suppress social media activism that tells a different narrative. For example, an article in the China Daily documents US involvement in detail with photographs of meetings between US officials and Hong Kong opposition, as well as the role of NED and Voice of America.

Independent media outlets, such as the ones cited above, are exposing who is behind the protests and their pro-capitalist, imperialist agenda. They are starting to change the dominant western narrative. This is critical because it is easy for activists to be drawn into supporting movements that are counter to our goals for social and economic justice as well as peace.

Hong Kongers have also been manipulated pawns in the US Great Power Conflict with China. They are advocating against their own interests by seeking what will essentially be re-colonization by the West. If the US is successful, it will not be good for the people of Hong Kong, Asia or the world.