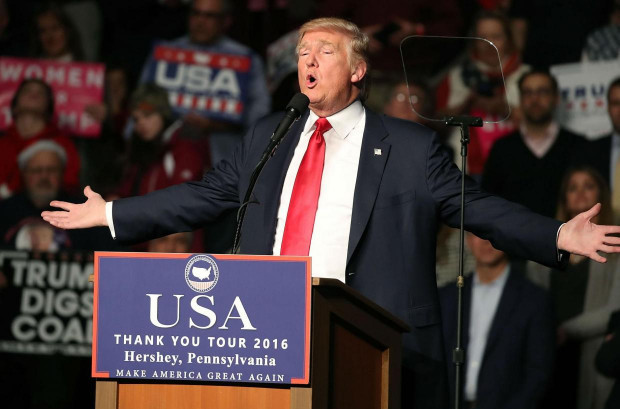 We Are Not Living In ‘Post-Truth’ World, We Are Living Lies Of Others

Above Photo: After Donald Trump’s election, the term ‘post-truth’ was coined to describe a world in which fake news stories gain easy traction on social media Getty

Nigel Farage is not a Nazi and nor is Donald Trump. But what is terrifying – and deeply akin to fascism – is our ability to ‘think’ our way from truth into lies

Just take a look at the wreckage of the Middle East with its history of people’s popular republics and its hateful dictators. They feast on dishonesty, although they all – bar the late Muammar al-Gaddafi – demand regular elections to make-believe their way back to power.

Now, I suppose, it is we who have regular elections based on lies. So maybe Trump and the Arab autocrats will get on rather well. Trump already likes Field Marshal/President al-Sissi of Egypt, and he’s already got a golf course in Dubai. That he deals in lies, that he manufactures facts, should make him quite at home in the Middle East. Misogyny, bullying, threats to political opponents, authoritarianism, tyranny, torture, sneers at minorities: it’s part and parcel of the Arab world.

And look at Israel. The new US ambassador-to-be – who might as well be the Israeli ambassador to the US – can’t wait to move the American embassy to Jerusalem. He seems to feel more antagonism towards the Jewish left in America than the Palestinians who claim East Jerusalem as a capital and whose state he has no interest in. Will Trump enrage the Arabs? Or will he get away with a little domestic rearrangement of the Israel embassy on the grounds that the Gulf Arabs, at least, know that Israel’s anti-Shiism – against Syria, Iran and Hezbollah – fits in rather well with the Sunni potentates who’ve been funding Isis and Jabhat al-Nusrah and all the other jolly jihadis?

I suspect that “post-truth” has more to do with social media than mendacious elections. The use of social media in reporting the battle of eastern Aleppo has been extraordinary, weird, dangerous, even murderous, when not a single Western journalist could report the eastern Aleppo war at first hand. Much damage has been done to the very credibility of journalism – and to politicians – by the acceptance of one side of the story only when not a single reporter can confirm with his or her own eyes what they are reporting.

We handed journalism to social media – and the armed men who control the areas from which these reports came know that they can pull the same trick again next time. They will, in Idlib. But this problem in the region is much, much bigger than a Syrian province. It’s now about the malleability of facts across the whole Middle East.

The 250,000 “trapped” Muslims of eastern Aleppo – now that 31,000 have chosen to go to Idlib, many more to western Aleppo – appear to have been somewhat fewer than 90,000. It’s now possible that at least 160,000 of the civilians “trapped” in eastern Aleppo did not actually exist, but no one says so. That vital statistic of 250,000, the very punctuation mark of every report on the besieged enclave, is now forgotten or ignored (wisely, perhaps) by those who quoted it.

Nor does anyone tell us about the civilians of Palmyra now that Isis has returned. And what about Mosul? Weren’t we about to liberate one million civilians trapped there by the jihadis – no less deserving, surely, than the 250,000 or 100,000 or 90,000 or fewer civilians trapped in eastern Aleppo?

How can we complain about the lies of Trump and the Brexiteers when we journalists are chopping up the facts of the Middle East? Still, I notice in our newspapers and on television, Israel’s wall is a “security fence”, its colonies are “settlements” which are “disputed” rather than illegal.

Can we really shake our heads in disbelief at electoral lies when we have been lying to our readers and viewers for years?

My favourite journalistic philosopher, Fintan O’Toole of The Irish Times, got it right this month when he wrote that “the mendacity of politics in 2016 has indeed been astonishing both in its brazenness and in its effectiveness. The claim by the Leave side in the Brexit referendum that £350m a week would be taken from the United Kingdom’s contribution to the European Union’s budget and put into the National Health Service was quickly and comprehensively demolished. Being caught out in a lie did not matter… it was a proof of a weird kind of authenticity. Flagrant lies showed that you were not one of the experts that the leading Brexiteer Michael Gove invited UK voters to despise and ignore…”

Lying, according to O’Toole, “floats freely, with no pretence to be anchored in evidence”. Nowhere could this be more fearfully represented than in denial of the Jewish Holocaust (or the Armenian Holocaust, for that matter) when social media – O’Toole specifically names Facebook and Google – “now direct users towards fake news stories and sickening neo-Nazi propaganda with barely a shrug of the shoulders. The companies evoke in their defence a notion of the ‘diversity of perspectives’, an Orwellian euphemism in which the belief that the Holocaust never happened is as valid as the knowledge that it did.”

I’ve never accepted the nonsense about Nazism and the American right. Trump is not Hitler, although there is a kind of theatrical fascism about his performance. He’s more buffoon than satanic, more Duce than Fuehrer. Cesare Rossi, an early collaborator of Mussolini, once described his leader as moving quickly “from cynicism to idealism, from impulsiveness to caution, generosity to cruelty… moderation to intransigence. It was as though he never knew his genuine self and was always striving after some counterfeit impersonation.” Could there be a better description of Trump? As Mussolini’s philosopher of fascism, Giovanni Gentile, said, “laughter is of the devil, and true believers do not smile except in bitter sarcasm.”

That grim use of the word “laughter” is a key to this. The Second World War finished before I was born. But there are distressing habits which those on the right of European politics demonstrate when they wish to sneer at their enemies, characteristics which I find deeply disturbing. It is the politics of “the last laugh”; of the humiliation of those who thought they knew better and must now rue the day of their supposed superiority. Just count how many headlines and writers have referred to Trump’s “last laugh”. It is vicious and vengeful.

Most of us remember Nigel Farage’s disgraceful – and untrue – words to the European Parliament on 28 June when he claimed that most members “have never done a proper job”. But it was his other remark which was so frightening: “Isn’t it funny? When I came here 17 years ago and I said I wanted to lead a campaign to get Britain to leave the European Union, you all laughed at me – well, I have to say, you’re not laughing now, are you?”

Those words jogged my memory. Where I had I heard this sneer before?

Then, quite by chance, there I was in Poland a few days ago, reading the late Martin Gilbert’s Auschwitz and the Allies, about the US and British failure to respond militarily to news of the Nazi death camps. And there I read these words, uttered by Adolf Hitler on 30 September 1942: “In Germany, too, the Jews once laughed at my prophecies. I don’t know whether they are still laughing, or whether they have already lost the inclination to laugh, but I can assure you that everywhere they will stop laughing.” In 1925, newly released from prison, Hitler had written a lengthy editorial in Volkischer Beobachter, attacking Jews, Marxists and the Weimar Republic. And that was 17 years before his 1942 “not laughing” speech.

Contempt lies deep in the antechamber of an angry man. No, Farage is not a Nazi and nor is Trump. Nor are the tinpot right-wing European politicians who frighten us with their racist dialogue. What is terrifying – and deeply akin to fascism – is our ability to “think” our way from truth into lies.

Today we don’t need rallies or newsreels because we have the internet and social media, the addiction of our age. It is a dependency on a drug which under the infamous “diversity of perspectives” presents morality and immorality as part of a landscape that spreads out flat to the horizon. Even we humble reporters can see what is happening. To an extent never witnessed before, a lot of people have started believing things that aren’t true. And it is acceptable to do this. And we help them.

Today, you can not only deny history – the Armenian and Jewish Holocausts, Anne Frank’s diary, the gas chambers of Auschwitz – you can also tell fibs, big or small, about almost anything which annoys you. The Middle East, with our journalistic help, is deep in the same false world. Every dictator is now fighting “terrorism” – along with the US, Nato, the EU, Russia, Hezbollah, Iran, the entire Arab Gulf (minus Yemen, for rather embarrassing reasons), China, Japan, Australia and – who knows? – Greenland as well.

But justice is not on the menu. This is a word which few politicians, statesmen, even journalists, any longer use. Neither Trump nor Clinton, nor the Brexiteers, have talked about justice. I’m not talking about justice for victims of “terror”, or Brits who think they’ve been cheated by the EU, but real justice for entire nations, for peoples, for the Middle East, even – dare I mention them? – for Palestinians. They do not live in a “post-truth” world. They’ve been living among other people’s lies for decades.

The only effect of last year’s political earthquakes is that we shall feel less guilty in repeating all these lies. They have now – like war – become normal, a “diversity of perspectives”, part of a familiar, fraudulent world in which untruthfulness has acquired a “weird authenticity”.

Trump is Hitler. Trump is Jesus. National suicide is reincarnation. We may not yet have understood this. But there are many in the Middle East who will understand us. Maybe they’ll have the last laugh.