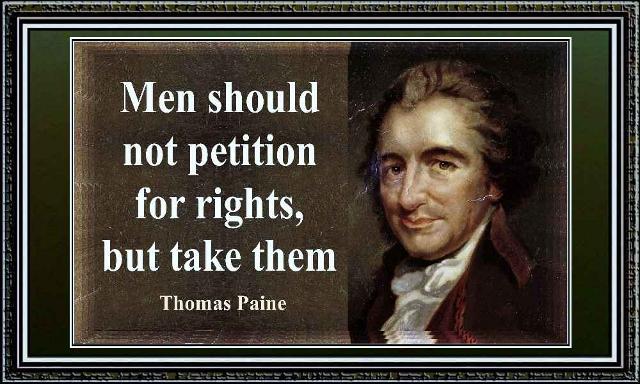 We Are Radicals at Heart: A New History Gets America Wrong

A new book by Yuval Levin says America should discover its Burkean roots, but it’s Paine and his radical vision that are truly in the spirit of this country.

Reading The Great Debate, reminded me of the night I spoke at the Yale Political Union (YPU) in February 2009. I was invited to New Haven to advance the argument that “Americans Should Embrace Their Radical History”—that is, the history of our many popular struggles to enhance American democratic life and our exceptional achievements in the 1770s, 1860s, and 1930s and 40s in confronting and overcoming threats to the survival of the nation by actually doing so.The nation’s oldest student debating society, the YPU is composed of seven distinct “parties” ranging from the right to the left. Of course, the young people on the progressive side of the hall supported my cause with gusto. And yet those of the parties of the right were especially entertaining, not only because they were enthusiastic opponents, but also because they were divided into two parties, one advancing the cause of liberty, free markets, and individualism, and the other, a “Burkean” politics that ardently and audaciously defended tradition, order, and elitism, to the point, it seemed, of retrospectively opposing even the American Revolution.

The author of The Great Debate, Yuval Levin, is no undergraduate however. A veteran of both the Bush White House and the GOP House staff, and now Hertog Fellow at the Ethics and Public Policy Center, editor of the conservative National Interest, and a regular contributor to the Weekly Standard and National Review, Levin is a rising star among rightwing public intellectuals. Indeed, New York Times columnist David Brooks has referred to him as “one of the two or three most influential young writers today.” Still, reviewing Levin’s book recalled my night with the YPU students because Levin himself champions the thought of the Irish-born British MP Edmund Burke against that of the English-born American Revolutionary Thomas Paine so fervently that at times I could not help but seriously wonder if Levin himself would not have opposed the American Revolution.

The Tea-Party-dominated GOP is no Burkean party. And despite the shouting of the Tea Partiers’ political favorites, the Democrats are no cohort of Paineite radicals.

Saying that he wrote his book, which apparently began as a doctoral dissertation at the University of Chicago, because he wanted to know “Why is there a left and right in our politics?” Levin explains how his quest necessarily took him back to the late eighteenth century, the Age of Revolution and the days of American Independence, the French Revolution, and British Radicalism, and the “great debate” between Burke and Paine, most especially to Burke’s attack on the French Revolution, Reflections on the Revolution in France (1790), and Paine’s two-part reply, Rights of Man (1791/92).

But Levin offers more than just a theoretical exegesis of Burke’s and Paine’s opposed views. After providing detailed philosophical discussions of their respective understandings of Nature and History, Justice and Order, Choice and Obligation, Reason and Prescription, and Revolution and Reform, in the course of which Levin makes it pretty clear that he thinks we would be better off adopting Burke’s thinking on politics and society rather than Paine’s, he closes by essentially arguing that we should prefer the Republican party over the Democratic party because the former best represents Burke’s “reformist conservatism” and the latter, a modern rendition of Paine’s “restorative progressivism” that necessarily threatens the legacy of generations and deeply-held values of ordinary Americans.

As Levin presents the Great Debate: Whereas Paine, the prophet of the Age of Revolution, championed universal “natural rights,” an ungrounded radical individualism and egalitarianism, and the “rights of the living” to make their own history, Burke, the prophet of modern conservatism, rejected Enlightenment utopianism and radicalism and urged respect for long-evolved and time-tested political and social institutions and practices and acceptance of the obligations that one generation necessarily has to another. And whereas, Paine sought to rally “the people” to turn the world upside down to restore the rights that monarchical and aristocratic rulers had suppressed, Burke called for preserving the prevailing political and social order and, when circumstances truly demanded it, instituting incremental reforms that would not destabilize it and jeopardize the good it afforded.

Philosophically speaking, Levin makes Burke sound so nice, doesn’t he? Especially when we suffer upheavals and troubles of every sort and seem to have so little confidence in government and politicians. Well, think again. Think historically. For all of his theoretical warmth and rhetorical niceties, Burke was not just a conservative. He was a reactionary. Yes, he began as a reformer. He sympathized with the Irish downtrodden, African slaves, and American colonists of the late 1700s. But he did not call for an end to England’s control of Ireland, the abolition of slavery, or Britain’s imperial rule of America. No, he merely sympathized and proposed piecemeal reforms to the existing systems of exploitation and oppression. And when the French people had the audacity to rise up in 1789 against the Ancien Regime that made life so miserable for so many of them, Burke too rose up—up in anger, that is, against the French revolutionaries.

Fearing that the French Revolution might encourage similar action by the British people, Burke penned his Reflections. In it he vehemently denounced the Gallic revolutionaries and heartily defended England’s constitution and political and social order. Rejecting the spread of “reason” and political equality as dangerous, he firmly defended tradition and hierarchy and counseled respect and submissiveness. To do otherwise, he warned—while ignoring the violence and harshness of Europe’s aristocratic Old Orders and that of Hanoverian Britain itself—was to invite chaos and tyranny. Referring to the common people as “the swinish multitude,” Burke made quite clear his hostility to the idea of popular politics and democracy.

In short, however much Levin dresses up Burke’s arguments with talk of tradition, preservation, family, community, and generations, they remain a defense of authority, exploitation, and oppression and a call to accept a status quo benefitting the 1% past or present. Paine rightly wrote of Burke: “He pities the plumage [the deposed queen, Marie Antoinette] but forgets the dying bird [the French common people].”

At the same time, by reducing Paine’s arguments to merely “philosophy” as well, Levin represents the revolutionary patriot as essentially untethered and his ideas as far from appealing. But here too, think again. Think historically and you discover a Paine firmly grounded and decidedly clear minded. In Paine you find a fellow citizen whose radical-democratic ideas about the purpose and promise of America you already embrace, for Paine himself inscribed them in the very foundations of the nation.

Coming to America in late 1774, already approaching 40, Paine not only had all the makings of a radical. He also carried within him the idea of the “rights of the freeborn Briton”—an idea cultivated by a tradition of “radicalism” that reached from the Peasant Rising of 1381, to the English Revolution of the 1640s (in which the English taught the French how to take off the head of a king), to the popular crowd actions of eighteenth-century London. And yet, he did not become a radical until his arrival in Philadelphia in 1774. Indeed, it was Americans themselves who turned him into a revolutionary and he returned the favor. Impressed by their diversity and rebelliousness, the liberty-loving and democratic spirit that animated their actions, and how they had organized themselves to govern everyday public life and commerce, he wrote Common Sense to enable Americans to see who they were, what they were about, and what they might achieve (“We have it in our power to begin the world over again”), and thereby turned their colonial rebellion into a world-historic revolution for independence and the making of a democratic republic.

And not only for America, but also for Paine himself, there was no going back. He wrote The Crisis Papers to sustain the American struggle through dark times—“These are the times that try men’s souls”—and went on not only to serve the cause of democratic republicanism in Europe by way of writing Rights of Man,but also, horrified by the poverty he saw in Britain and France in the 1790s, to pioneer social democracy both in that work and in his later Agrarian Justice, not to mention preach a militant and democratic deism in The Age of Reason.

For Paine, the struggle was about freedom and democracy and the right of every generation to challenge the way things are and possibly overturn the given order to better realize freedom and democracy—or, as Jefferson articulated it in the Declaration which Paine’s pen inspired, “all men are created equal… endowed by their Creator with certain unalienable rights…among these are life, liberty, and the pursuit of happiness.”

Not surprisingly, as much as many a powerful, propertied, and pious American might have wanted to promote Burkean ideals in favor of hierarchy and order—and as much as many of them did everything they could to suppress Paine’s memory and legacy and the democratic impulses they inspired—a true Burkean politics (aside from the Washington Post columns of George Will) never really caught on in the United States. Indeed, thanks in good part to Paine we Americans not only started out, but remain, radicals at heart.

Still, in Levin’s favor, I suppose we already do embrace the arguments of both Paine and Burke, for in every generation Americans—as Burke might have appreciated—have recognized the nation’s exceptional purpose and promise and honored the Founders’ declared ideals and aspirations and—as Paine would have expected—fought to transform America by extending and deepening freedom, equality, and democracy. We have campaigned to separate church and state, abolish slavery, empower labor, secure the equal rights of women and minorities, reduce poverty, protect workers, consumers, and the environment

But of course, neither Levin nor I have much to celebrate today. The Tea-Party-dominated GOP is no Burkean party. And despite the shouting of the Tea Partiers’ political favorites, the Democrats are no cohort of Paineite radicals. Hell, the Tea Partiers themselves have selectively appropriated the words of Paine to pursue, as anyone who actually has read him knows, anti-Paineite ends.

So, I will invite Levin out for a beer, not simply because he has written a book that vigorously challenged my thinking and debating skills, but all the more, so we can toast our respective heroes and lament the state of American politics together—lament that the GOP has turned its back on Burke (if it ever had embraced him) and that the Democrats have forsaken Paine. And to boost the spirits of my drinking partner, I will seriously recommend to him that he become a Democrat. After all, if he is looking for a party of deference, compromise, and piecemeal reform he need look no further. I will then go home, and in the way a good Paineite should, apply my pen to reminding my fellow citizens that history is not over, that prevailing inequalities and oppressions are not inevitable, and that we need to remember who are and recognize that “We have it in our power to begin the world over again.”