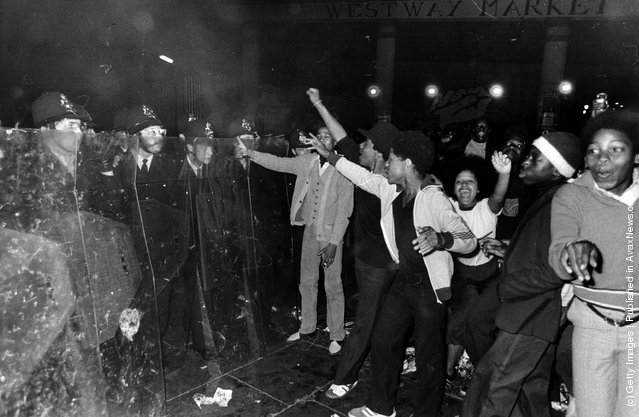 “We Are Those Lions”: 5 Strikes & Riots That Shook Modern Britain

“We have encountered already the drive-train, which, turned by agrarian advances, will spin the wheels of the Industrial Revolution. The race for productivity, the very basis of capitalist development, means the replacement of labor power with means of production, living labor with dead, variable capital with constant.

Amid this arise General Ludd and Captain Swing, one leading sallies against the textile industries, the other in the agrarian theater of combat. Both movements described themselves in military terms, never better than in a letter “Signed by the General of the Army of Redressers Ned Ludd Clerk.” They took oaths, stocked arms.” Joshua Clover, Riot. Strike. Riot

Since the very first machines were destroyed during the Luddite uprisings of 1811-1813 culminating in a region-wide rebellion in Northwestern England, militant direct action has been a weapon of the working class and a form of resistance against their rulers.

Joshua Clover’s Riot. Strike. Riot proclaims that ours has become an “age of riots” as the struggle of people versus state and capital has taken to the streets. Rioting was the central form of protest in the seventeenth and eighteenth centuries, and was supplanted by the strike in the early nineteenth century. It returned to prominence in the 1970s, profoundly changed along with the coordinates of race and class.

From early wage demands to recent social justice campaigns pursued through occupations and blockades, Clover connects these protests to the upheavals of a sclerotic economy in a state of moral collapse. Historical events such as the global economic crisis of 1973 and thedecline of organized labour, viewed from the perspective of vast social transformations, are the proper context for understanding these eruptions of discontent. As social unrest against an unsustainable order continues to grow, this valuable history will help guide future antagonists in their struggles toward a revolutionary horizon.

To honour some of the great feats of working class collective power, we have collated a list of some of the most significant strikes and riots that Britain has seen since the turn of the century.

The General Strike began on the 3rd May 1926 and lasted ten days. The strike was called by the Trades Union Congress (T.U.C) to support the coal miners who were striking in the Northern England, Scotland and Wales. A further 1.5—1.75 million workers throughout the country would strike in solidarity with the miners, who were being forced to take a pay-cut. The aim was to bring the capital to a grinding halt in order to compel the government to side with the miners.

Notably, the leaders of the Labour Party were unhappy about the proposed general strike because they were aware of the revolutionary elements within the union movement and of the damage an association with them would do to the party’s newly established reputation as a party of government.

(Rank and file Trade Unionists and workers on strike)

After the Second World War, the number of Caribbean migrants arriving in London was increasing. Due to systematic racism, xenophobia, and the gap between rich and poor widening, working class and poor white families would compete with working class and poor black families for housing and work. Bosses and landlords exploited these tensions, while far-right fascist groups such as the Union for British Freedom and the British Union of Fascists led by Oswald Mosely held meetings recruiting young white men.

During the summer of 1958, Teddy Boys (a British subculture of wealthy, young, white men who would don a style inspired by the dandies of the Edwardian period) became increasingly hostile to anyone who was black. They would terrorise the Caribbean youth, smash up cafes and shops in predominantly Caribbean areas of London, and harass black women on the streets. On the morning of 24 August, nine white youths assaulted five black men in separate incidents in Shepherd’s Bush and Notting Hill, seriously injuring three of them. This is what is thought to have triggered the Notting Hill riots.

Tensions between the black community and the Metropolitan Police bubbled, with accusations from the families of victims of racist attacks claiming the police had not taken seriously the sheer level of racist abuse reported. Despite testimony from individual police officers, senior officers at the time assured the Home Secretary that there was no racial motivation behind the riots.

Jayaben Desai was an Indian immigrant and a worker in the dispatch department of the Grunwick film processing plant in Willesden, London. Asian women made up most of the workforce in the company. On a record-breaking hot summers day in August 1976, after being told she would have to work overtime, Desai walked out and said the following to her boss:

What you are running here is not a factory, it is a zoo. In a zoo, there are many types of animals. Some are monkeys who dance on your fingertips, others are lions who can bite your head off. We are those lions, Mr Manager.

What followed, was a remarkable strike of predominantly South Asian women workers led by Desai, who would protest against their mistreatment by managers, and for the right for union representation. Remarkable particularly because Desai and the South Asian women workers striking were to challenge racialized and gendered preconceptions that saw them as docile, weak and domesticated. Their actions marked a turning point in British trade unionism too; one that would now see how integral women’s work was to industrial organizing.

For two more years, Desai and the women workers courageously stood up to bosses and the police who attempted to suppress their rebellion by breaking up their pickets. While the strikers may not have won their demands outright, their courageous struggle against management sent a message to the British workforce and bosses alike: Asian women will not tolerate exploitation as a class.

Led by Arthur Scargill, president of the National Union of Mineworkers(NUM), The Miners’ Strike of 1984-85 was a significant industrial action affecting the British coal industry. Within a year some 140,000 members of NUM fought a monumental dispute with Margaret Thatcher the “milk-snatcher” of the Tory party who sought to crush the NUM, which was then considered to be the backbone of the British labor movement. Thatcher, who colluded with US President Ronald Reagan, orchestrated the underpinnings of a new set of economic policies that would usher in an era of privatization, free market and deregulation. Economic neoliberalism, seeking economic freedom for big business owners and bosses, would ensure workers’ rights and welfare were undermined in favour of profit.

Since NUM had fought and won against the Tories in 1972 and 1974, the ruling class plotted for a decade to rid themselves of the thorn that was the workers’ defiance against their bosses. Thatcher’s plans to privatize the coal industry caused Scargill and the miners to take industrial action on a mass scale. This culminated on 18th June 1984 in the Battle of Orgreave, where picketing miners were forced defend themselves against riot shielded, baton wielding police sent to smash the pickets. Orgreave is still considered one of the most ruthless attacks on workers by police in recent British history. Tristram Hunt described the clashes as “a brutal example of legalised state violence.”

Between the 6th and 11th August 2011, several London boroughs became a site of organised chaos, as thousands of people took to the streets after tensions between the police and the working class communities, predominantly populated by immigrants, had sharply risen following the killing of Mark Duggan by police officers. Mark Duggan was a 29-year-old local Tottenham resident who police attempted to arrest, resulting in his killing by officers who claimed he was a threat. The media storm, which ensued thereafter, was a flagrant display of racist attempts to portray Duggan as a drug-dealing thug and “well known gangster”, thus alleviating any potential guilt on the officers’ part of a an unlawful killing.

The riots spread across parts of London, including Edmonton, Wood Green, Brixton and Woolwich. A five-day siege between local disaffected youth and riot police followed, resulting in the vandalizing of police vehicles and a London bus. This was a message to the state: the working class and the black community are not taking anymore institutionalised violence from the state. The streets were on lock-down; dozens of high-street businesses were forced to close and for a brief time pissed off working class youth – who recognised they had no stake in society – owned the streets.

Media coverage of the riots were predictably biased against the disaffected, and in favour of law and order and capital. Many academics attempted to theorize, at times even romanticize, the five-day street battles between the local community and the cops. This over-glorification of the street battles – which led to the death of five people – took place against the backdrop of vicious cuts to local services, the ever-encroaching privatization of social welfare, and structural state oppression against the black community and migrants.