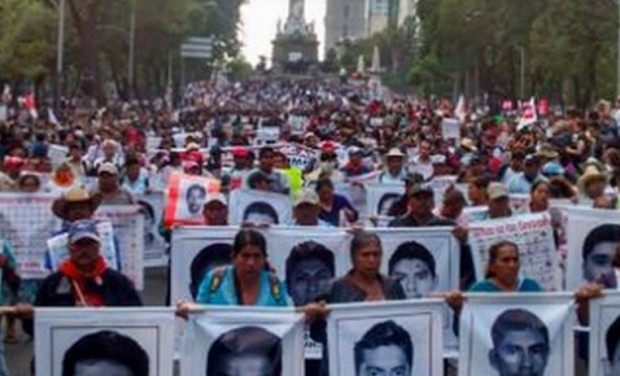 We Are Tired Of Supporting Militarized Police At Home & Abroad

The #USTired2 Campaign Demonstrates How The Us Is Not Only Supporting Militarized Police In Ferguson and Across the United States, but Around The World As Well. This December 7th Join In Protesting the Killing of 43 Students In Mexico, a Crime in Which the US is Complicit

For many in these United States, images of mass graves in Mexico or stories like that of the 43 missing Normalista students of Ayotzinapa are disturbing, but far away. For others of us, Mexico is not just a “foreign policy issue.” Mexico es familia.

Inspired by our friends, family and loved ones in Mexico, #UStired2 is a nationwide effort involving students, local Mexican and Latino and other communities, immigrant rights activists, religious organizations, concerned scholars and many others from across the entire United States. Our effort has one goal: working in the United States to promote peace as an alternative to the catastrophically failed drug war that has left more than 100,000 dead and 25,000 people disappeared in Mexico.

More than 43 cities in the United States—one for each student disappeared in Ayotzinapa—have joined our effort—all in less than a week after the call to action was made. The group, named after #Yamecansé (I’m tired), a phrase popularized by Mexican protesters* to express the deep desire to end state-sanctioned mass murder in Mexico. We here in the United States are also tired of all the killing, tired of all the disappearances and tired of all the failed drug war policies that foster these catastrophes, paid for by our government with our tax dollars.

We draw on U.S. law, as stipulated under the Leahy Amendment, which states that the U.S. government is obliged to cut off aid to security forces found to be in violation of the human rights of its people. Mexico has excelled in this regard, even beyond most countries of the Americas.

We act with the confidence and the conviction that the time has come to stop contributing to the failed drug war in Mexico. The first step in that process is to stop “Plan México,” a multi-billion dollar U.S. aid package that has done nothing to reduce drug traffic into the U.S. or drug use here, and has instead supported a corrupt government using the drug war as cover for a war on its own people, especially those like the Normalistas of Ayotzinapa, young souls whose only “crime” is  wanting a better education and life.

The disappearance of the 43 student-teachers has riveted and mobilized Mexico in unprecedented ways and makes more clear to many us that we in the United States must break our country’s addiction to violence-as-solution to failed economic policies like NAFTA and the deadly excuses that have us blindly paying for that violence-as-solution, even when we’re broke.

Those committed to the current course of US policy in Mexico will find themselves in the uncomfortable position of having to deal not just with a the “Mexican problem” on immigration. As of December 3rd, they will have to face opposition to their “Mexico problem,” which will join immigration as one of the major concerns of Mexicans, Latinos and others in the United States.The time for an expanded political imagination has come.

*Protesters started using the hashtag #YaMeCansé after Mexican attorney general Jesús Murillo Karam responded to questions about the disappeared 43 students by saying “No más preguntas. Ya me cansé” (no more questions. I’m tired), highlighting the callous official response to this case and many others.