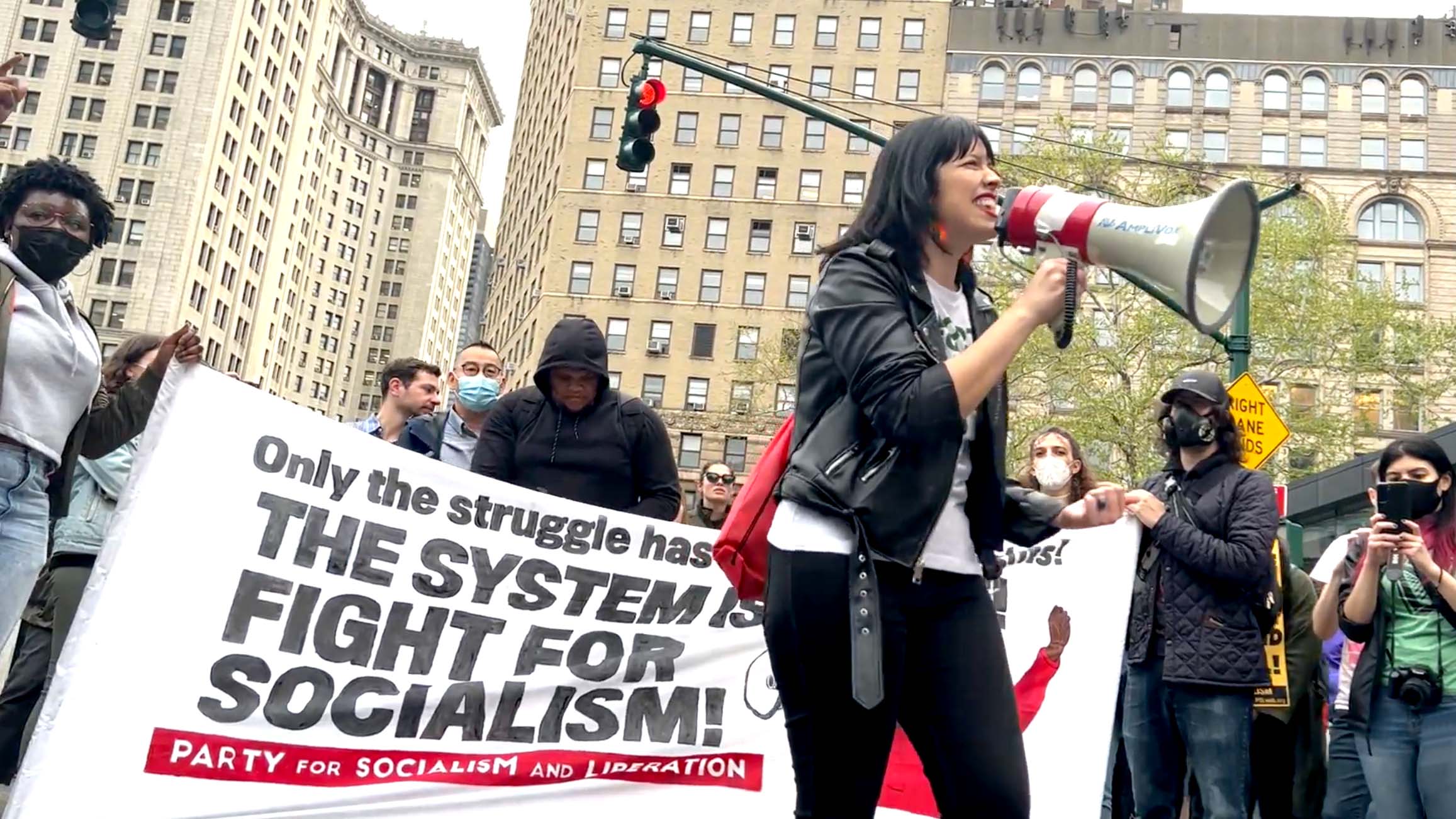 A Socialist Perspective On The Abortion Rights Struggle

Above Photo: Garcia speaking at a demonstration for abortion rights in New York City, shortly after the draft decision was leaked. Party for Socialism and Liberation.

“We Are Trying To Transform Society.”

Karina Garcia, a socialist feminist activist, spoke to Peoples Dispatch in the wake of the Roe v. Wade draft decision.

On the night of May 3, a US Supreme Court draft decision regarding the landmark Roe v. Wade decision was leaked to the press. As per the draft, penned by conservative Justice Samuel Alito, the Supreme Court is set to overturn the historic decision, eliminating the right to abortion for millions of women. In response, thousands have taken to the streets of US cities, demanding that the right to abortion be protected. Activists and the millions of women in the streets hope that this outpour can sway the final Supreme Court decision.

Karina Garcia is an organizer with the Party for Socialism and Liberation and a writer for socialist feminist magazine Breaking the Chains. She has been organizing since she was 17 years old, when she founded a women’s rights organization at her high school. For the past ten years, she worked with a national reproductive justice organization focused on the Latina community. Peoples Dispatch interviewed Garcia to discuss her perspective on the current moment in the struggle for abortion access in the US.

Peoples Dispatch: Why is it that the ruling class in the United States is fighting so hard against abortion rights, specifically now? What has changed about the current moment?

Karina Garcia: This is really an attempt to distract, divide and confuse the people.

People are facing so many problems, whether it’s poverty wages, a lack of health care, lack of sick days, lack of all sorts of protections, clean water, food, all these very obvious social problems that actually have solutions. If the government put the massive amounts of resources that exist in this country into these issues, we would actually be able to provide people with all of the basic necessities, not just in this country, but in the world, overnight. We have those resources now. 40% of the food in this country is wasted. We spend trillions of dollars on the military industrial complex, starting new wars.

The resources all exist for people to live dignified lives and to have food, health care, housing, education, all the things that they need, but we have a ruling class that doesn’t want that. They want to keep starting new wars and they want to keep accumulating endless amounts of profits.

The fact of the matter is, people’s living conditions in this country have not improved, they’ve gotten worse. Inequality has only been sharpened during this pandemic. The complete failure and inability of the government to meet the people’s basic needs has been exposed for all to see. They couldn’t even pass Build Back Better, which would barely get us to a level of social welfare that’s comparable to other countries in the global north. They didn’t do anything, not that they couldn’t, but they just wouldn’t. They can make all the excuses they want: the filibuster, this or that politician, we’ve heard it all and it’s worthless. When they want something to pass, they get their people in line and they pass it. When it comes to tax cuts for the rich and bailouts for the banks, they act immediately and with complete urgency. So we’re not having it.

Right now there are all of these looming social problems that exist in society, and abortion access is just that thing that they are able to use, that they’re trying to use to scapegoat and to divide people. It presents an opportunity for them to distract. Our class is mostly unorganized, so they can use these wedge issues because they have control over the media.

They use these wedge issues to divide people based on what they call moral issues. But the fact of the matter is, we know that it has nothing to do with morality at all, because the states where they are enacting the most vicious and cruel restrictions on abortion access are the places where women and families have it the worst. Texas, for example, is one of the worst places to be if you’re a woman or a child, because there’s so little support, from child poverty to lack of access to child care, to poor, underfunded schools.

The restrictions on abortion have nothing to do with actually improving people’s lives, or protecting people’s lives or protecting families. It has everything to do with providing no solutions and no major changes in society, not actually providing anything material for people other than scapegoating, propaganda, division, humiliation, shame. That’s the only thing that they can offer, to put down and shame people.

PD: What do you think it will take to sway the court’s decision on Roe v. Wade?

KG: What has happened has provided us with a really big opportunity. The myth is that the Supreme Court is this higher, almost holy body, that is only moved by arguments and whatever is written on paper. That’s just ahistorical. The Supreme Court is highly political. They’re highly affected by social movements, the things that are happening in society, over and above everything else: their function is to provide stability for the capitalist system.

And whenever there are movements that are challenging the status quo, that can be explosive, it creates a level of instability that they don’t want to deal with. That’s the kind of instability that we have to show them. If they think that they’re going to roll back the rights of half the population, that they’re going to put us in this endless position of humiliation and domination and control and that we’re not going to do anything about it, they’re mistaken.

This has provided us an opportunity. Whoever leaked that draft decision is a hero. Because they’re giving us a chance to fight now. Influence them now. Make them feel it now.

Kavanaugh is a DC frat boy, he’s not a religious zealot. He can totally be moved. And, you know what? At the end of the day, any one of them can be.

PD: Is Roe v. Wade enough? And if not, what more do we need?

Abortion is just one part of health care. It’s a part of the fight for reproductive justice. The fight for socialism is a fight for all of our needs to be met, for us to have the resources and the wealth that we create put towards the things that matter to us, the things that that we really need. Clean water, clean energy, housing, health care, education, all those things are part of reproductive justice. They’re a way for families to live with dignity.

We’re not really for imposing one or another view of what families should or shouldn’t be. We’re for providing people with what they need to be able to create the families that they want with the resources that they deserve. Whether that’s more support for fertility treatments for people who are having difficulty conceiving, or better or more accessible forms of contraception, to be able to have an abortion if they need it, if they want it, if it makes sense for them.

All of those things are what’s needed, what’s really required. Roe is an important baseline, but we have to go beyond it too.

PD: What are some major obstacles for building a movement that can win abortion rights for everyone?

KG: One of the obstacles that we face is that a lot of people don’t have basic sex education. They really don’t understand the process of pregnancy and so that makes them vulnerable to the cynical and despicable vitriol that is put out by the right wing antis. Another challenge, and I think the challenge that the whole movement faces, is the nonprofit industrial complex. Just the fact that so many issues are separated and that and there’s real divisions, of course, in our class, but we don’t have a very highly developed national movement for something more comprehensive.

We are trying to transform society. We think that our resources should be used to fight racism, to fight sexism, to overcome the historic exploitation and super-exploitation and oppression of certain communities and actually build up a society that meets all of our needs, the needs of the many, not the few, a society that aligns with our values for dignity and justice.

Having that collective vision, a program that ties together all of the different social movements, that’s historically one of the challenges that we face in this country.

PD: How do activists overcome the divisions within society that already exist in order to build this movement?

KG: Political education is really important. In addition to bringing people out in the street, we have to bring people together to deepen their understanding of what’s behind these attacks so that we can see that this is part of a bigger attack on our communities as a whole. When they’re coming after one segment of our community, [help them see] it actually hurts all of us. An injury to one is an injury to all. That can’t just be some slogan. It has to become a fact.

PD: You’ve been in the streets these past few days. What is the mood of the people? What have you been noticing?

KG: People were so happy when we were marching down the street. People joined us from the sidewalks, they were cheering and chanting alongside us. That kind of feeling is electrifying, it’s magnetic, and it spreads. That’s why it’s important to get out into the streets.

And it’s a complete distraction to just say, oh, we have to focus on getting the Democrats elected, let’s all vote. Please. We’re past that. That’s our enemies talking, confusing us, and lulling us back to sleep. We have to stay out in the streets so that we continue to bring our people out and break through this facade of apathy.

People know what’s going on and they have seen and experienced that their vote hasn’t fundamentally changed the things around them. It’s bigger than choosing between these two ruling parties: we need a new system. It’s a really patronizing way of thinking and is just downright disrespectful to say that all the people that don’t vote just don’t care or are apathetic or are somehow to blame for this rotten system of these capitalist politicians who use all of our resources and then have the nerve to blame the people themselves for the problems that they’ve created.

PD: What can the movement in the US learn from the struggles in Latin America for abortion rights?

KG: Stay in the streets. Our sisters in Latin America, they won their rights the way that we won our rights to begin with. They fought for them. They took them. They built strong independent organizations, people’s organizations. They’re connected to a broader socialist vision of all of the different rights that they deserve. It wasn’t about just waiting for these politicians to change their mind.

They were able to win their rights by exercising and showing their strength, the strength of their organizations, building them tirelessly day by day through actions, great and small, supporting each other, helping each other. All of these ways that you show you care about each other. You build up your organization that makes you so much more powerful, so much more difficult to ignore, coopt, and divide, when you are building strong political organizations in your community with a shared vision of what you want.