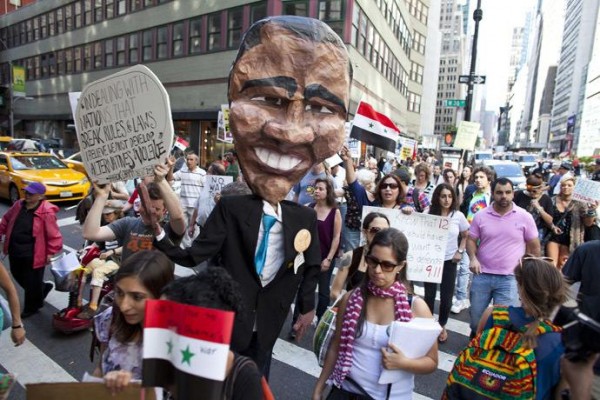 We Beat The War Party, For Now …

One of the few things I got right in my last column was the title, which asked “Can This War Be Stopped?” Apparently the answer is: yes, albeit not for any reason the administration and the pundits (or do I repeat myself?) are now crowing about.

We are told a Kerry gaffe, an impressive display of Putin’s diplomatic jiu-jitsu, and – most of all – the “credible threat” of war led to what the Obamaites and their media cheerleaders are hailing as a great victory for this administration. A look at the timeline of events, however, effectively debunks the official narrative.

The key development here wasn’t Kerry’s fumble and the Russian interception but theannouncement by majority leader Harry Reid that the Senate vote on the war resolution would be delayed: the War Party simply didn’t have the votes. What the administration discovered, to their horror, was that the more they made their case to the American people the less support they had: every time Kerry opened his mouth, their poll numbers went down a few points, and a few more members of Congress came out against intervention.

Reid didn’t decide to cancel the Senate vote due to Putin’s diplomatic deus ex machina: as important Democratic Senators defected to the peace camp hours before Reid’s announcement, panic set in. With calls against outnumbering those in favor by over 100-to-1, not even the legendary power of AIPAC could intimidate legislators into swimming against such a tide.

Kerry’s “gaffe” – which was in fact a curt dismissal of the possibility Assad would ever agree to hand over his chemical weapons – came later than the decision to cancel the Senate vote, although Reid’s announcement appeared to coincide with Putin’s proposal. Initially, you’ll recall, the State Department walked back the Kerry gaffe, saying he didn’t really mean it and never mind. It was Sen. Rand Paul (R-Kentucky) – who has led the antiwar opposition in the Senate in conjunction with progressive firebrand Alan Grayson in the House – who was first to say hey, the Putin peace deal is worth looking into:

“I think it would be a great step forward if Assad were willing to do it and if Russia were willing to monitor it or an international authority with Russia. I think part of diplomacy and getting things to work is allowing people to save face. If there’s a way Russia can save face in this thing and be part of an international coalition, that’s what we should shoot for.

“I think one of the biggest problems with bombing Assad is that if we bomb Assad and we destabilize the chemical weapons and they become loose within the country and al Qaeda gets access to them, then I think that’s the real disaster. Even Kerry admitted it would take 75,000 American troops to secure these weapons, and that’s what I’ve been saying all along – that bombing may actually lead to more instability.”

“But having an international body take control of the chemical weapons would add much greater stability, and I think it would be a benefit for all of us if that would happen.”

Faced with certain defeat in the House, an increasingly problematic Senate, and – most importantly – a massive antiwar upsurge getting more massive and more vocal by the minute, the Obama administration grabbed the Putin proposal like a drowning man being thrown a life jacket. But make no mistake: neither the gaffe-prone Kerry nor the opportunistic Russian leader can take credit for stopping the rush to war. It was the American people who rose up and delivered the War Party a mighty blow – one they will have difficulty recovering from for a long time to come.

Having decided to undo Harry Truman’s folly and obey the Constitution for once, the President went to Congress before striking Syria – and in doing so he not only backed himself into a corner, he also unwittingly opened up what must surely look like Pandora’s Box as far as the War Party is concerned. Because from now on whenever a President decides he has the power to take us to war without consulting the people’s representatives, he or she will have a much harder time getting away with it. Even as Barry declares he has authority to bomb without congressional approval, few believe he would actually go ahead and do it – for fear the word impeachment would migrate from the fringes to the center with the same speed and momentum as widespread antiwar sentiment.

Although the President is still going ahead with his Tuesday night speech, most of the wind has already been taken out of his sails. In spite of all the blustering about theCredible Threat, which the President is sure to tout, no one sees him as a credible threat to anything but his own party and the country at large. He never wanted to strike Syria in the first place, and only recently allowed himself to be talked into it by the Israel Firsters and “humanitarian interventionists” who dominate the foreign policy Establishment. For over a year, Obama successfully resisted the energetic efforts of both his former Secretary of State and his current one to give the Syrian rebels some real arms and get serious about the US government’s longstanding regime change operation in Syria. The intense media campaign around the Ghouta incident changed that – but not for long.

Besides which, the “intelligence” that supposedly ties Assad directly to the gas attack was already in the process of being thoroughly debunked – much quicker, by the way, than the rather more imaginative neocon war propaganda we were subjected to in the run up to the Iraq disaster.

As for the Putin-Assad proposal, it is already in the process of getting tied up in the UN Security Council, as the French and the Russians haggle over the details. For if the Syrian government is now giving up its chemical weapons, then what about the rebels – will they give up theirs? Oh, they don’t have any, you say? Well that’s not what the Russians tell us: they just issued a 100-page report documenting rebel deployments of poison gas. The issue, in short, will soon take on the dimensions of the Iranian nuclear question, and Syria will drop from the front pages of the nation’s newspapers – which is all Barry and both parties in Congress care about.

This little episode dramatizes with stunning clarity the immutable truth of what I call “libertarian realism” – that facts on the ground have little impact on the course of American foreign policy. It’s really all about politics on the home front. The Iraq war had nothing to do with the threat of Al Qaeda, in spite of the Bush administration’s war propaganda: it was all about building domestic support for the GOP around a program of war hysteria, the mystic doctrine of “American exceptionalism,” anduntrammeled foreign adventurism. So too in the case of Syria, but this time things turned out differently: the War Party ran up against a brick wall of public opposition – and real outrage that the political class would even try something like this after a decade of war.

This issue will die down, but it won’t go away. The War Party doesn’t give up that easily.

Because the Syria debate isn’t really about an alleged poison gas attack supposedly launched by Assad: it’s about regime change. The US, after all, is aiding the rebels: former Secretary of State Hillary Clinton said repeatedly “Assad must go.” That goal isunchanged, even as we negotiate with Assad and his Russian backers to implement a face-saving handover of Syria’s chemical weapons.

The rush to war has turned into a leisurely stroll, but that doesn’t mean the War Party won’t eventually get us to the finish line. That’s why you need to keep calling your congressional representatives – yes, even a second time, just to make sure they aren’t fooled into supporting a war resolution masquerading as a “disarmament” scheme backed up by the threat of force.

NOTES IN THE MARGIN

You can check out my Twitter feed by going here. But please note that my tweets are sometimes deliberately provocative, often made in jest, and largely consist of me thinking out loud.

I’ve written a couple of books, which you might want to peruse. Here is the link for buying the second edition of my 1993 book, Reclaiming the American Right: The Lost Legacy of the Conservative Movement, with an Introduction by Prof. George W. Carey, a Foreword by Patrick J. Buchanan, and critical essays by Scott Richert andDavid Gordon (ISI Books, 2008).